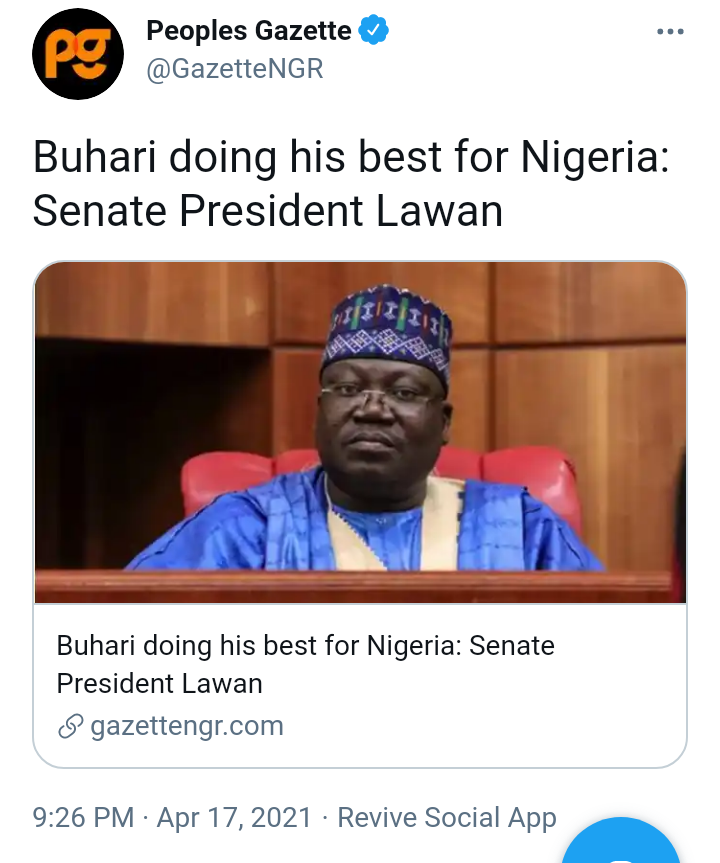 President of the Senate Ahmad Lawan says President Muhammadu Buhari is trying his best possible to ensure that things are okay with Nigeria.

This is as Mr Buhari’s insufferable regime continues with its lethargic response to security and economic challenges.

However, Punch Newspaper reported that Mr Lawan while at the launch of Potiskum Emirate Central Mosque Appeal Fund at Potiskum, Yobe State on Saturday, said the leadership of the National Assembly was also trying their best to ensure that things are okay with Nigeria.

He urged Nigerians to continue to pray for the President Buhari administrations, adding that leaders need the prayers of their followers. 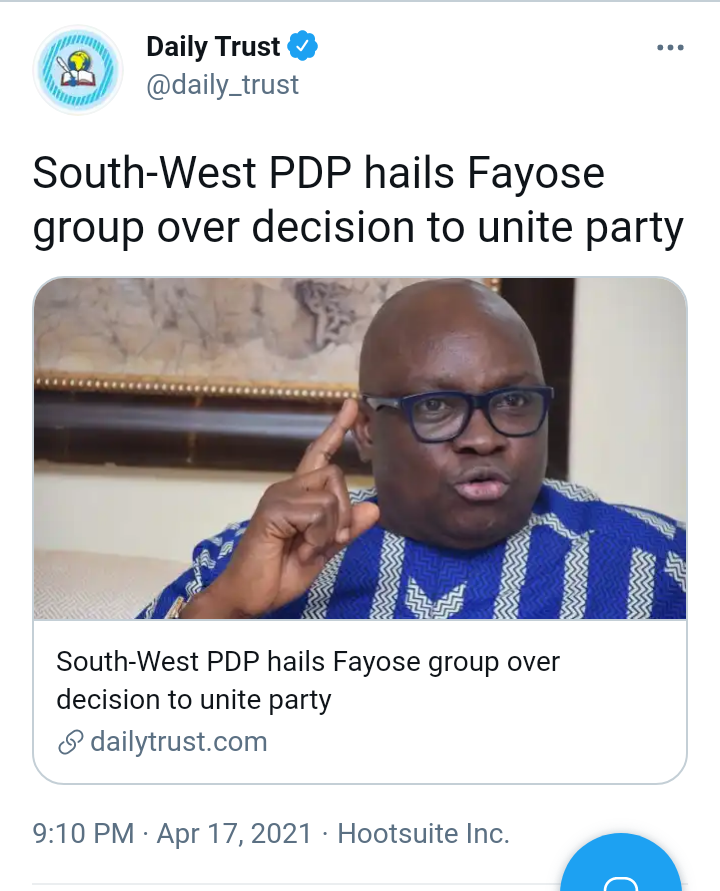 The People’s Democratic Party (PDP) in the South West (PDP) has commended former Gov. Ayodele Fayose of Ekiti over his decision to unite aggrieved members in the zone.

The party also commended Fayose for prevailing on Dr Eddy Olafeso and others, who contested in its just-concluded South-West congress, held in Osogbo, from challenging the outcome of the congress in court.

The PDP Publicity Secretary in the South-West, Sanya Atofarati, gave the commendation in a statement issued on Saturday in Ado Ekiti.

He praised the former governor for displaying high level of maturity by yielding to calls and appeals from party stakeholders to sheath his sword.

He stated that the decision of the group to join forces with Gov. Seyi Makinde and the Taofeek Arapaja-led South-West leadership was a welcome development, adding that it would further help rebuild the party.

Atofarati also expressed the appreciation of the Arapaja- led executives to Fayose’s group for affirming that none of its candidates would go to court to challenge the outcome of the congress. 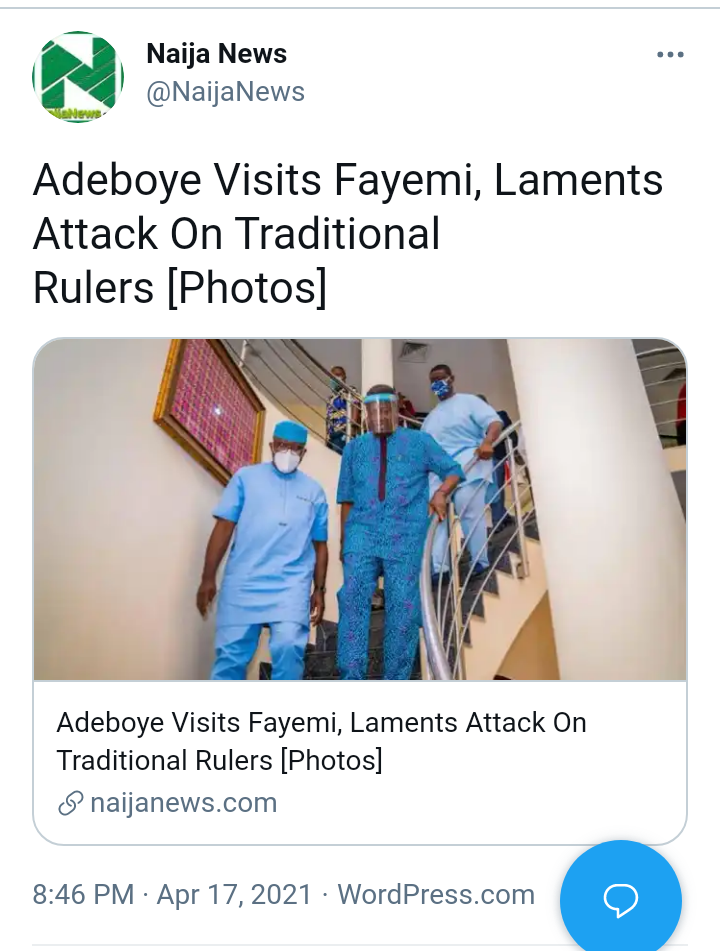 Speaking in Ado Ekiti, the Ekiti State capital, Adeboye described recent attacks by gunmen on monarchs in the state as flagrant disrespect to the traditional institutions.

The RCCG GO was reacting to the attacks on two traditional rulers in Ekiti State within a space of six days – the Elewu of Ewu Ekiti, Oba Adetutu Ajayi, was waylaid and shot but escaped being kidnapped penultimate Friday and the Obadu of Ilemeso Ekiti, Oba David Oyewumi, who was abducted in his palace on Thursday and his whereabouts still unknown.

Pastor Adeboye urged Nigerians to continue to pray for the country’s survival in view of the problems confronting it.

According to the cleric, traditional institution deserved respect because of the critical roles it plays in society. 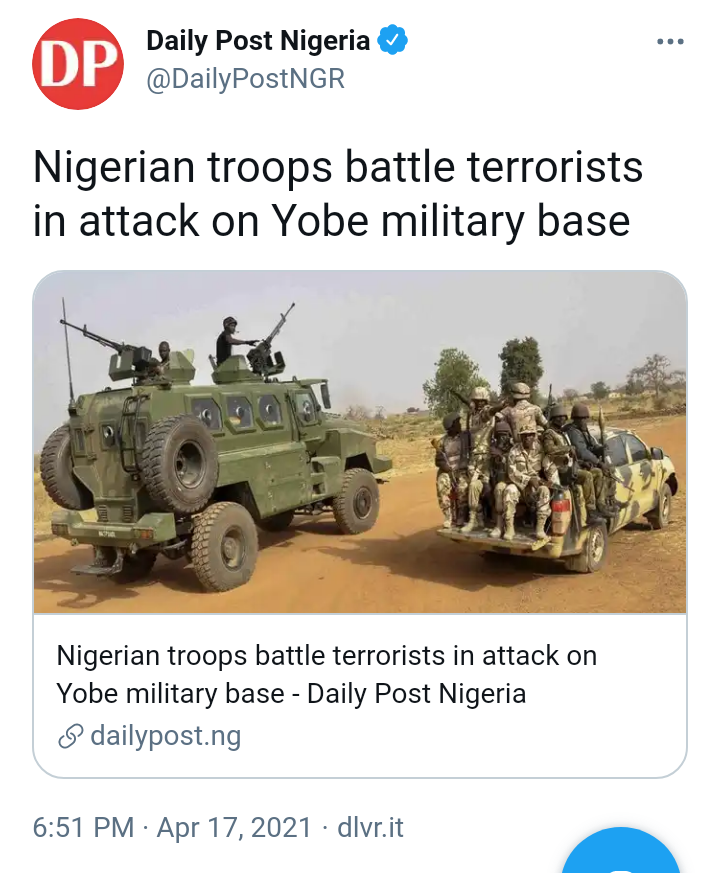 The Nigerian Army have restricted movement along Damaturu-Damboa-Biu Road following a charge by Boko Haram/ISWAP members on the Kumuya military base in Yobe State.

The terrorists used heavy weapons in the assault and patrolled the community to prevent the reinforcement of soldiers.

PRNigeria reports that troops and those mobilized to the battleground eventually overpowered the insurgents after a heavy exchange.

A section of the military base at Kumuya was burnt, while the number of casualties the military suffered is yet to be ascertained. 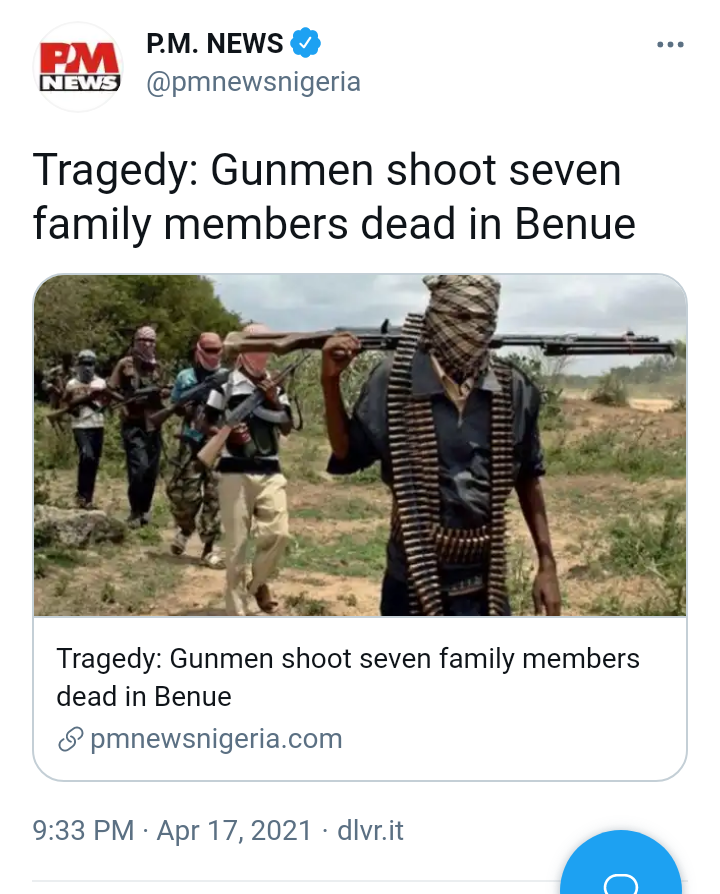 It was gathered that the gunmen also shot five other people, with three of them in critical condition. 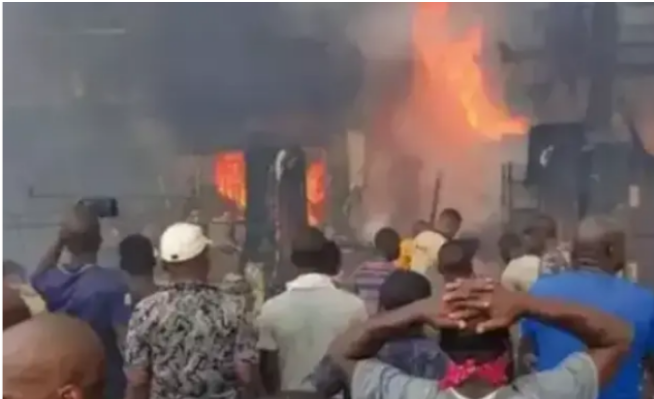 A survivor who narrated how the attackers invaded the community to the State Commissioner for Lands, Survey and Solid Minerals, Mr Bernard Unenge described the attack as unprovoked.

The assailants reportedly hit the community around 1.00am when people were sleeping.

He stated that he had to call on the security operatives that were stationed around Adaka community, also on the outskirts of state capital who responded swiftly.

However, before the military agencies got to the scene of the incident, the assailants had already fled after accomplishing their mission, TVC reports.

Unenge told newsmen that seven dead bodies were recovered and deposited at the Federal Medical Centre Makurdi mortuary while five persons were also injured with three in very critical condition.

He described the incident as heart wrenching and tragic as it happened unprovoked, pointing out that his people were shot and butchered like animals.