OBASEKI VS IYAMU: SDP, KOWA, APGA, and other 31 Political parties merge with PDP to Beat APC in Edo 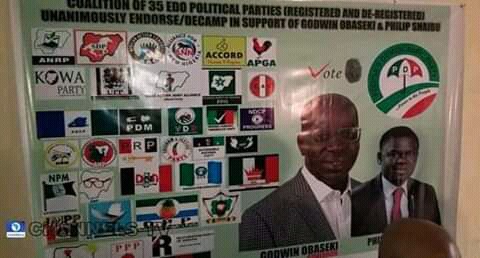 Edo State Governor Obaseki has won the 2016 gubernatorial election under the ruling APC.

But ahead of the 2020 general election, the APC will be fielded under former APC chairman Comrade. Adams Oshomole says they will not give him an APC Governorship ticket. Obaseki left the party to join the PDP, which has already nominated him for governorship.

The Edo State by-elections are fast approaching, with elections to be held on September 13, 2020.

The APC and the PDP have been at loggerheads since the deployment of state election Committee.

Kano State Governor, Dr. Abdullahi Umar Ganduje is the Chairman of the APC's Campaign Committee under the APC.

Meanwhile, Rivers State Governor Neysom Wike is the Chairman of the Edo State Governorship Campaign Committee, under the ruling PDP in the state.

However, there was a dispute between the two candidates, with Governor Ganduje calling Wike Dollar Thief.

Governor Wike immediately responded to Ganduje, calling Ganduje "the one who caught pocketing dollars in public".