Akpabio; Why Nigerian Youths and Everyone Should Take A Second Look.

By IKPNews (self media writer) | 2 years ago

I discovered that Akpabio is a survivor. Yes he survived from his mother having to cracked kernel to keep him in school, and him having to do anything, applying his survival instinct of humanity to survive. He rose from the hood, he has street credibility, and understands that, though there is an establishment, the establishment shouldn’t be use for the benefit of just but few. But for, even not for everybody, BUT AT MOST for the majority of the people... Toney Etido 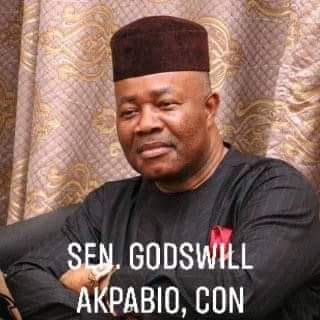 Fela Anikulapo Kuti and many front line crusaders of time and history were once so maligned, with calls for their head on a platter as a trophy for someone somewhere, eager wishers waiting and anticipating the day when they would be un-skin alive and screwed inside out beyond remedy without no reason, but for the fact that they are becoming “larger than thou”. (IN THEIR DESIRE, LET’S TAME HIM) Most times it comes and they rejoice, cling glasses, and say, “I no tell you?”, but the other time, it never comes, and we’re left disappointed. But here is always the hick! There is always that moment that would always come for us all transducers and the accusers of the brethren to realize that all along, these people we want out, those their idiosyncrasies that we abhorred all along were for our own good. And those moments are always too late the moments. At that point, all we are left with are always for us to raise tombs and monument in honour and memory of those people who came and lived for us, while we never knew, but we became part of those who participated to make their lives difficult. We called for, and aided their death. Woe unto you! for ye build the sepulchres of the prophets, and your fathers killed them”, Luke11:47 There is every reason for us all, most especially the youths of Nigeria to take a second look at this man call Akpabio. Why always him? Why are there so many at the top that want him down, as well as more at the grassroots that wish him a continuous sailing?

As I was meditating today on this, I started asking myself those questions and many more about why we hate so much in Nigeria without reason? WHY DO WE HATE? WHY DO WE ANTICIPATE AND CIRCULATE THE NEGATIVES ABOUT PEOPLE, EVEN GOOD PEOPLE WHOM NOT TOO LONG, DID US GOOD? WHAY DO THEY HATE AKPABIO? 1.     I discovered that Akpabio is a survivor. Yes he survived from his mother having to cracked kernel to keep him in school, and him having to do anything, applying his survival instinct of humanity to survive. He rose from the hood, he has street credibility, and understands that, though there is an establishment, the establishment shouldn’t be use for the benefit of just but few. But for, even not for everybody, BUT AT LEAST for the majority of the people. That’s why he commands so much respect from the masses and resonates from among them and those considered down trodden. And check again and carefully this time. You would discover that those that want to see him cut down are those sons of the privilege who talks adherence to establishment, they nurtured establishment for establishment, knowing that they are nurturing establishment for themselves and their sons. These are the people that are quick to point out where someone who tries to tinker with the settings of establishment is contravening establishment. They don’t really care about you, nor for the establishment per-say. They only care that it would disrupt their flow and projections. That is the reason for the uproar against the Hon. Minister of Niger Delta Affairs, Senator Godswil Akpabio and the ongoing FORENSIC AUDIT OF THE NDDC .There is need to take another look at this man and what he is doing at the NDDC and why the proponents of establishment and adherents assembly of Satan are trying to cut him down.

2.     Akpabio is not a “tribalist” and he is not a stingy mompho as most of our politicians and wealthy people in Nigeria are. He is simply generous to all that comes his way and he feels they (the people) can do with those little helps, having been there and understands what it means to Africans and our culture to share what you are privileged to come by with your neigbours. Not those like the Chinese whose heart had been turned upside down and backward, that they rather destroy and waste what they don’t need at their disposal than to hand it over to those that have needs for them. Ever experience the Chinese? This is how we get here in the first place. These are the children of those everything were handed over to, they have no tolerant for people who expects a hand from them. They see anyone who don’t have and expect some hand a bother. And when they couldn’t garnered the support and good-will a giver gets, they resorts to what they are doing, setting one’s up and trying to find fault. Let’s take a look, Akpabio is better a devil than many of these people accusing and pointing at him as a devil. Akpabio thinks Akwa Ibom, Niger Delta and Nigeria. Akpabio is a better Devil if he is a devil at all.