By Worldupdated (self media writer) | 9 months ago

Alpha Conde, President of Guinea Conakry, was captured by army putschists during a coup d'etat in Conakry.

Soldiers who staged an uprising in Guinea's capital on Sunday announced on state television that they had dissolved the West African country's government and constitution, as well as closed all land and air borders.

The defence ministry, on the other hand, said an attack on the presidential palace in Conakry had been repulsed.

This comes as Nigeria's government condemns the coup, calling it a violation of the ECOWAS Protocol on Democracy and Good Governance.

Reuters reports that on Sunday morning the fighting broke out close to the palace and several sources told an elite national army unit led by Mamady Doumbouya, the former French legionnaire, was behind the riots.

On Sunday afternoon, videos shared in social media that Reuters was not able to authenticate immediately showed President Alpha Conde in a room surrounded by army troops.

After changing the Constitution, Conde won a third term in October to allow him to renew his presidency, despite violent opposition protests.

Doumbouya appeared on state television draped in Guinea's national flag and surrounded by eight other armed soldiers, announcing that his supporters intended to form a transitional government and would provide more details later.

"We've dissolved institutions and governments," Doumbouya said. "To join the people we call our brothers in arms."

The Ministry of Defense said that Conde loyal security forces had rejected the attack and restored order, while people took to the roads in the evening to mark the apparent success of the uprising.

A witness from Reuters was seen with motorcyclists and cheering viewers, along with pick-up trucks and military vehicles. "The country is free! Guinea is free! A woman from her balcony shouted, "Bravo."

However, the Federal Government has condemned Guinea's military coup.

It called for those behind the government's unconstitutional transition to restore constitutional order and protect life and property without delay. 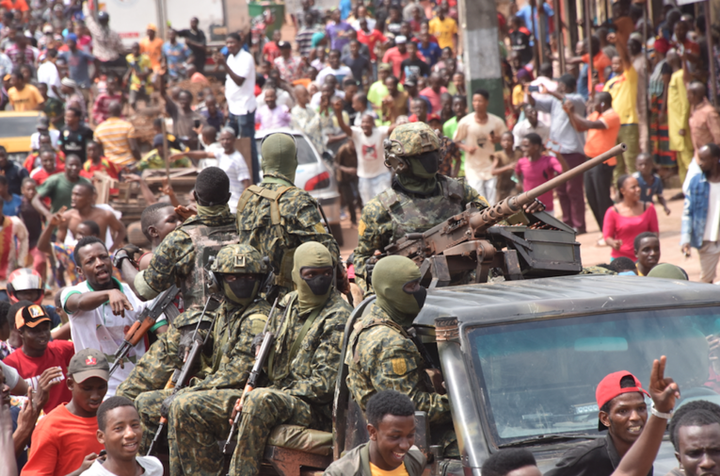 The FG said it was saddened by the developments in Guinea in its statement on Sunday by the Speaker of the Minister of Foreign Affairs, Mrs. Esther Sunsuwa.

"Nigeria's Government is disappointed by the apparent coup in the Republic of Guinea and clearly in violation of the ECOWAS Protocol on Democracy and Good Governance. The Nigerian Government condemns the coup in Guinea.

"Nigeria's government strongly condemns, rejects and calls upon those behind this coup to restore constitutional order without delay and protect every life and property."