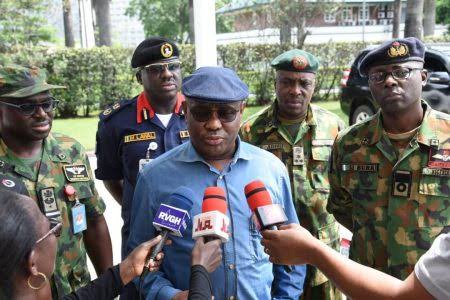 The Police in Rivers State may be preparing for a showdown with the State Government, as Commissioner of Police, Joseph Mukan called on Governor Nyesom Wike to handover former Managing Director of the Niger Delta Development Commission, Joy Nunieh, to him.

A coalition of 35 political parties in Edo State on Friday collapsed their structures in support of the re-election of Governor Godwin Obaseki in the September 19 governorship election. The parties include the Social Democratic Party, Accord Party, KOWA, and 32 others.

The chairman of the Ondo State All Progressives Congress Primary Election Committee, Governor Yahaya Bello, has said it was the sole responsibility and prerogative of the party to chose which mode to use for its primary. He said this in response to a question on the party’s position on agitations by 11 of 12 aspirants for the party to jettison the indirect mode in favour of the direct mode.

Nigeria’s first female combat helicopter pilot, Tolulope Arotile, who died on July 14, will be buried next Thursday, July 23, the Nigerian Air Force said on Friday, The NAF said Arotile will be laid to rest with “full military honours at the National Military Cemetery in Abuja.

The Federal Government has donated 29,800 bags of fertilisers and other farm inputs to victims of banditry in Zamfara State. It also handed over assorted grains to the affected residents to help cushion the impact of the COVID-19 lockdown.

The Federal High Court in Lagos has fixed July 24 to rule on an application by Internet celebrity, Ismaila Mustapha, alias Mompha, to recover items seized from him by the Economic and Financial Crimes Commission. In an application on Friday by his lawyer, Mr Gboyega Oyewole (SAN), Mompha listed the seized items as “five wristwatches, one Apple Air pod, one iPhone 8 mobile phone and one pair of sunglasses.