How Choice Of Presidential Candidate May Tear PDP Governors Apart

By Babs-Oluribigbe-Adeoye (self media writer) | 1 month ago 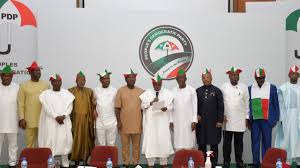 There is every indication that the governors elected on the platform of the Peoples Democratic Party are working towards presenting one of their own as the presidential candidate in 2023.

This fact no longer becoming vague as the just concluded national convention of the party has shown clearly the real controllers of the party.

Rivers State governor Nyesom Wike recent declared that he was really behind the removal of the suspended chairman of the party, Uche Secondus from office.

Wike even went further to state that if he allowed Secondus to continue in office, PDP may collapse.

The election of the national vice chairman of the party in the South-west, Ambassador Taofeek Arapaja as the new Deputy National Chairman (South) also manifested the PDP governors' hand in glove to control every structure in the party, even without recourse to the Board Trustees and larger body of the National Executive Council.

Arapaja until few days to the convention did not know he would contest for national deputy chairman, until Governor Seyi Makinde decided to drag him to the fray. The rest is now history.

But in all these, what would be the fate of Atiku Abubakar and other likely contenders such as Bukola Saraki, and Peter Obi?

Meanwhile, it was gathered that what bind the governors together for now may soon tear them apart when the time comes to choose presidential candidate for the party.

Already, the governor of Adamawa and the chairman of the just concluded PDP national convention, Ahmadu Fintiri declared his position on who he would support as presidential candidate.

The former vice president is also from Adamawa state and was said to be a major financier of Fintiri's governorship election in 2019.

Also Oyo state governor is rumored to be interested in joint ticket with Atiku.

No doubt, Wike is having his ways among his colleagues for now and he is trying everything possible to making sure his preferred man, Governor Aminu Tambuwal gets the ticket but the question is will Tambuwal can swim against the tide?

Content created and supplied by: Babs-Oluribigbe-Adeoye (via Opera News )