EKITI 2022: I am Confident of Winning Primary Election - Eleka

By TamunotonyeInioribo (self media writer) | 2 days ago 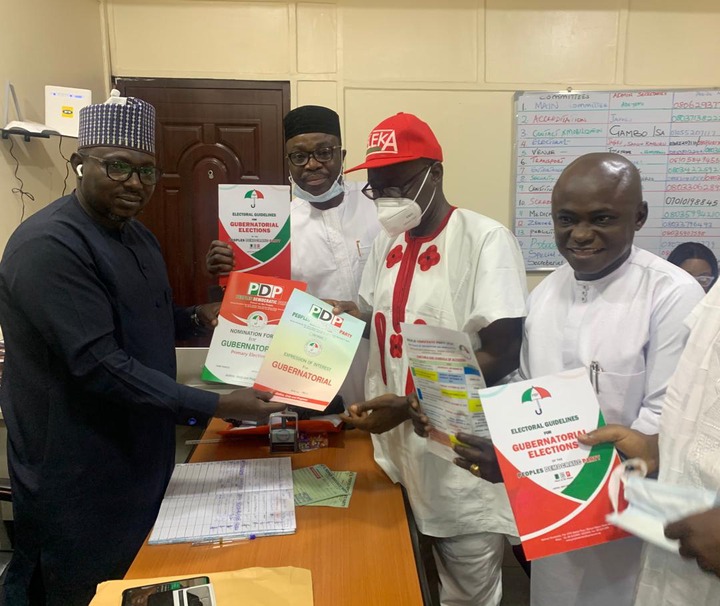 The candidate of the People's Democratic Party (PDP) in the 2018 Ekiti State governorship election and immediate past Deputy Governor, Professor Kolapo Olusola Eleka, has stated that he is confident of winning the forthcoming primary election to become the flag bearer of the party.

Eleka, who also reiterated his commitment to the adequate welfarism of the party members, added that the state will witness tremendous development under his leadership in PDP.

He equally noted that Ekiti people are waiting patiently for PDP to take over power in 2022.

The former University Don gave the submission while addressing the media at the PDP Secretariat in Abuja on Monday, shortly after picking his Expression of Interest and Nomination Forms to contest in the forthcoming gubernatorial primary election of the party.

The primary is billed to hold in January 2022.

Eleka, who is believed to be the leading aspirant among others, giving the overwhelming support from party faithfuls and votes he garnered from good people of the state in 2018, expressed optimism of a prosperous state under his watch if elected by the electorates.

"I sincerely appreciate leaders and other members of our party for their continuous show of support and loyalty to our course to rebuild the party and take the state from the opposition to the ruling party.

"While moving together to a new phase of our struggle to emancipate Ekiti State and its people from the status quo of insecurity, loss of jobs and poor infrastructural development since APC came to power in 2018, I assure our able youths, amiable women and patriotic leaders that their respective constituencies will be adequately represented," He stated.

Calling on PDP stakeholders to join hands with him to fly the ticket of the party in the 2022 governorship election, Eleka promised to sustain the dignity of the party and never leave it to pursue personal interest elsewhere.

"It is only when we work together that we can achieve together. We need to sustain the dignity of this party and be in power come 2022," Eleka was quoted as saying.

Speaking further, he said:" The very first job of a leader is to inspire trust. Trust is the single most essential element to our ability to deliver extraordinary results in an enduring way. Today, I am carrying out the wishes of all sons and daughters of Ekiti who have reposed trust in me because they trust in my ability to deliver the dividends of governance in an extraordinary matter"