That moment when first Prime Minister of Pakistan Liaqat Ali Khan turned down the offer of Sardar Patel over Kashmir dispute. I consider it one of the biggest blunder ever made by any democratic Pakistani politician to date if it's believed to be true. Chaudhry Muhammad Ali was the 4th Prime Minister of Pakistan (between 6 February 1952 to 23 March 1956) and wrote a book “Emergence of Pakistan” in later years of his life which was published in 1967. He quoted about one high profile meeting which occurred between India and Pakistan over the Kashmir dispute in 1948. He himself was part of it as well.

When India entered its force in the state of Junagarh (it was one of the 3 disputed states between India and Pakistan at the time of partition 1947) and annexed it in 1948, Pakistan was not happy over these developments and protested to India. Pakistan requested to escalate this issue through a high profile meeting which was accepted by India. This meeting was held in New Delhi in 1948 where Indian delegation was led by Indian Prime Minister and Deputy Prime Minister Jawaharlal Nehru and Sardar Patel respectively. From Pakistan’s side, Liaqat Ali Khan and Chaudhry Muhammad Ali (the one who later became Prime Minister of Pakistan and wrote “The Emergence of Pakistan”) were leading the delegation. He quoted this meeting in the following words.

Sardar Patel, although a bitter enemy of Pakistan, was a greater realist than Nehru. In one of the discussions between the two Prime Ministers, at which Patel and I were also present, Liaquat Ali Khan dwelt at length on the inconsistency of the Indian stand with regard to Junagadh and Kashmir. If Junagadh, despite its Muslim ruler's accession to Pakistan belonged to India because of its Hindu majority, how could Kashmir, with its Muslim majority, be a part of India simply by virtue of its Hindu ruler having signed a conditional instrument of accession to India? If the instrument of accession signed by the Muslim ruler of Junagarh was of no validity, the instrument of accession signed by Hindu ruler of Kashmir was also invalid. If the will of the people was to prevail in Junagadh, it must prevail in Kashmir as well. India could not claim both Junagadh and Kashmir. When Liaqut Ali Khan made these incontrovertible points, Patel could not contain himself and burst out: Why do you compare Junagadh with Kashmir? Talk of Hyderabad and Kashmir, and we could reach an agreement.

Patel s view at this time and even later was that India s effort to retain Muslim majority areas against the will of the people was a source not of strength but of weakness to India. He felt that if India and Pakistan agreed to let Kashmir go to Pakistan and Hyderabad to India, the problems of Kashmir and of Hyderabad could be solved peacefully and to the mutual advantage of India and Pakistan. 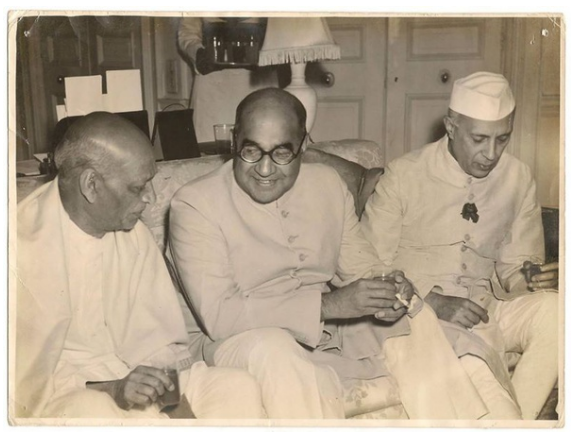 In order to validate this argument, I also read about the context of Kuldeep Nayar who said similar things about Sardar Patel’s view over Kashmir.

Kuldip Nayar, in his book Beyond the Lines—An Autobiography writes on Sardar Patel’s consistent view that Kashmir should be part of Pakistan. Nayar writes, ‘My impression is that had Pakistan been patient it would have got Kashmir automatically. India could not have conquered it, nor could a Hindu Maharaja have ignored the composition of the population, which was predominantly Muslim. Instead, an impatient Pakistan sent tribesmen along with regular troops to Kashmir within days of Independence.’

According to Chaudhary Muhammad Ali, Liaqat Ali Khan overturned the offer of Sardar Patel and there were no further developments between India and Pakistan.

In my fair analysis, it was the best bargain of that time where Pakistan could have got Kashmir in hand in later years without further clashing with India. May be Pakistani leadership at that era was more interested to get both Hyderabad Deccan and Kashmir altogether which was impossible. Later India capitalized this opportunity and strengthened its control over Kashmir. Had Liaqat Ali Khan considered the offer of Sardar Patel with a cool head for a while, it would have been a different story today. But I’m aware of the fact that there are multiple factors behind Kashmir conflict which can't be ignored in a single go.

To me, this was probably one of the biggest blunder ever done by Pakistan at International politics.