Buhari Is Determined To Protect The Lives Of Nigerians

By Tpublish (self media writer) | 4 months ago

President Muhammadu Buhari has emphasized his administration's commitment to ensuring the lives and property of all people, regardless of their socioeconomic status. 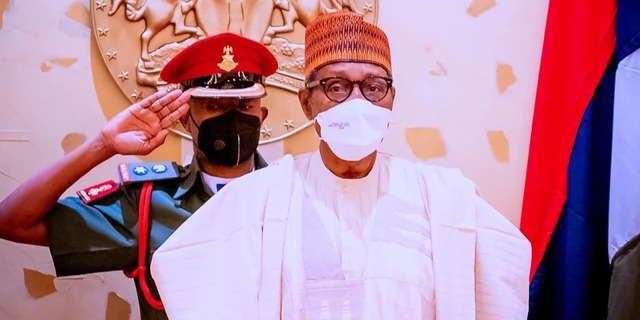 President Buhari addressed the National Security Council, which he presided over on Tuesday at the Presidential Villa in Abuja. The Minister of Defence, retired Maj.-Gen. Bashir Magashi, said the president made this position known,

Magashi said the president was updated on the latest security circumstances across the nation, particularly the increased attack against bandits in Zamfara and other portions of the country's northwest and northcentral regions.

"This conference was held to keep the C-in-C up to date on current events in the northwest and northcentral, including improvements, issues, and everything else connected to insurgency, banditry, kidnapping, etc.

"We believe that the frequency at which these things are occurring in Zamfara State and northcentral is a subject of concern for the government and all agencies responsible for executing operations in the northcentral, based on the meeting.

"We talked about the importance of acting quickly while dealing with the bandits. We believe they are becoming a nuisance; they are killing people, doing what they want, making reckless statements, and saying what they think they should say in order to get the type of audience they desire from society.

"We believe we have made significant progress in keeping this country together. If you look back before our arrival in 2014, you'll notice a lot of progress, but most people aren't aware of it.

"They think we're incompetent or whether there is something we don't know, but we're trying to figure out why people don't appreciate the government's efforts."

"We've assessed our situation and discovered that we're capable of doing this, but we'll need the help of every Nigerian to ensure a free society."

"So, he's directed us to find ways, tactics, and styles with which we can get out of this," he said. "We assured him that we'd do everything we could to ensure the mission's success and completion, especially when equipment and other things are available to support the course of our tactical manoeuvres, and that we'd do very well from now on."

The freshly purchased Super Tucano fighter jets are being tested, according to the ministry, and another six fighter jets will arrive in Nigeria by the end of September.

", he explained "We're only testing them right now, and six more are expected by the end of the week... maybe next week. So, when the twelve of them arrive, I expect the Chief of Air Staff to brief you as soon as possible on the operations they will be doing."