By POINTS (self media writer) | 2 years ago 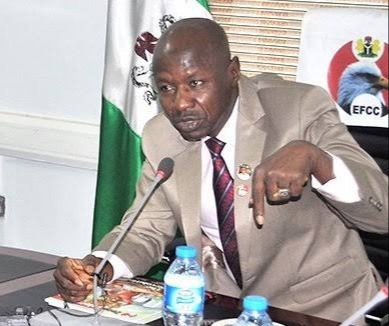 Allegations against Magu has been described as fabrications and his troubles a case of dog eating dog. Magu himself said these after his release.

The lawyer of the suspended Chairman of the Economic and Financial Crimes Commissions, EFCC, Ibrahim Magu, confirmed the release of his client by the presidential panel investigating him. In a phone conversation with Vanguard, Shittu disclosed that Magu was released this evening (Wednesday) and is currently in his house in Abuja.

The Senate has passed a bill seeking to establish the City University of Technology, Auchi, Edo and two other tertiary institutions in the country. The two other bills were the Nigerian Maritime University Okerenkoko, Delta and the Federal College of Education, Giwa, Kaduna bill. The bills were passed by the upper chamber following a clause-by-clause consideration of the report of the Senate Committee on Tertiary Institutions and TetFund as presented by the Chairman, Sen.

Anwar further stated that the Governor, after inaugurating the newly appointed Commissioner, Rimi hinted that there would be another reshuffle meant with the new Commissioner.

Senator Godswill Akpabio has denied the sexual harassment allegations against him by Ms. Gbene Joi Nunieh.

The minister in a statement issued on Wednesday, July 15 by Anietie Ekong, his spokesman, said the allegations are false.

Ms Nunieh, a former NDDC MD, accused the minister of corruption, sexual harassment, among others recently.

The Nigerian Senate has called for the age limit attached to job vacancies in the country to be raised.

The lawmakers said the age limit for jobs advertised by both government and private sector excludes many competent applicants.

The Senate stated that many graduates are now falsifying their age to fall within the age limit for them to be gainfully employed.

Details have emerged about the demise of Nigeria’s first female combat pilot, Flying Officer Tolulope Arotile, who died at the Nigerian Air Force Base in Kaduna State on Tuesday. It stated, “Flying Officer Arotile died on July 14, 2020 at the age of 24, when she was inadvertently hit by the reversing vehicle of an excited former Air Force Secondary School classmate while trying to greet her.

She subsequently died while receiving treatment at the hospital where she was taken to.

Content created and supplied by: POINTS (via Opera News )