By ChungleeWrites (self meida writer) | 1 months 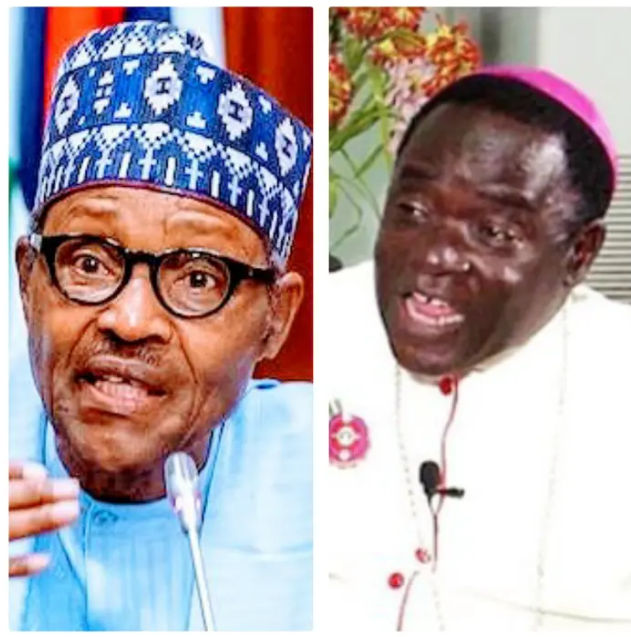 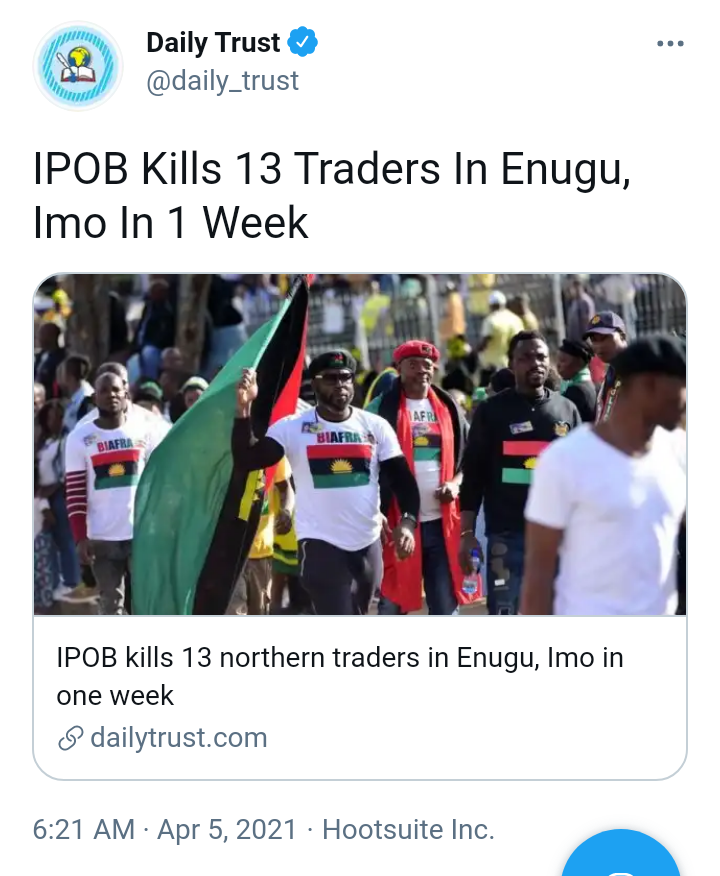 Suspected members of the Indigenous People of Biafra (IPOB) have killed 13 Hausa traders within one week in Enugu and Imo States, in what community leaders and security sources described as targeted killings by members of the outlawed group.

Many police personnel have been killed and facilities torched in escalating attacks on security agents in the south-eastern and south-south regions.

Vice President, Prof. Yemi Osinbajo, on Sunday, preached peace on a visit to Abakaliki, the Ebonyi State capital where he condoled the people and government of the state over last Monday’s killings in Egedegede, Ishielu Local Government Area.

In the latest attack on civilians of northern extraction, four butchers were gunned down by assailants in military camouflage who stormed the Afor Umuaka market around 8:30 pm on Saturday.

In Enugu, last Monday, at least six persons were killed during a targeted attack at Adani Community in Uzo-Uwani Local Government Area of Enugu State.

One of the victims was a prominent Hausa trader, said to have resided in the area for over 30 years. 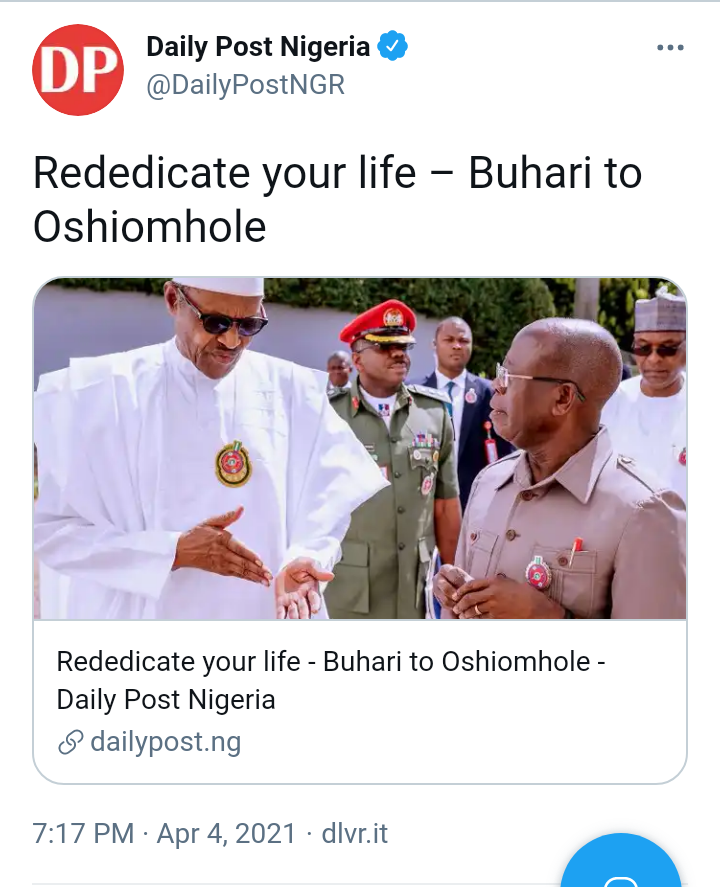 President Muhammadu Buhari has felicitated with ex-National Chairman of the All Progressives Congress (APC) Adams Oshiomhole on his 69th birthday.

The Nigerian leader advised the former Edo Governor to rededicate his life to working for the prosperity of those in need.

Buhari’s message was issued on Sunday by his spokesman, Garba Shehu.

He joined Oshiomhole’s family and well-wishers to thank God for a life of service to the nation, good health and opportunity to commemorate the special day.

The President hailed Oshiomhole for building bridges among people of diverse backgrounds, inspiring others to be patriotic, eschewing politics of division and acrimony. 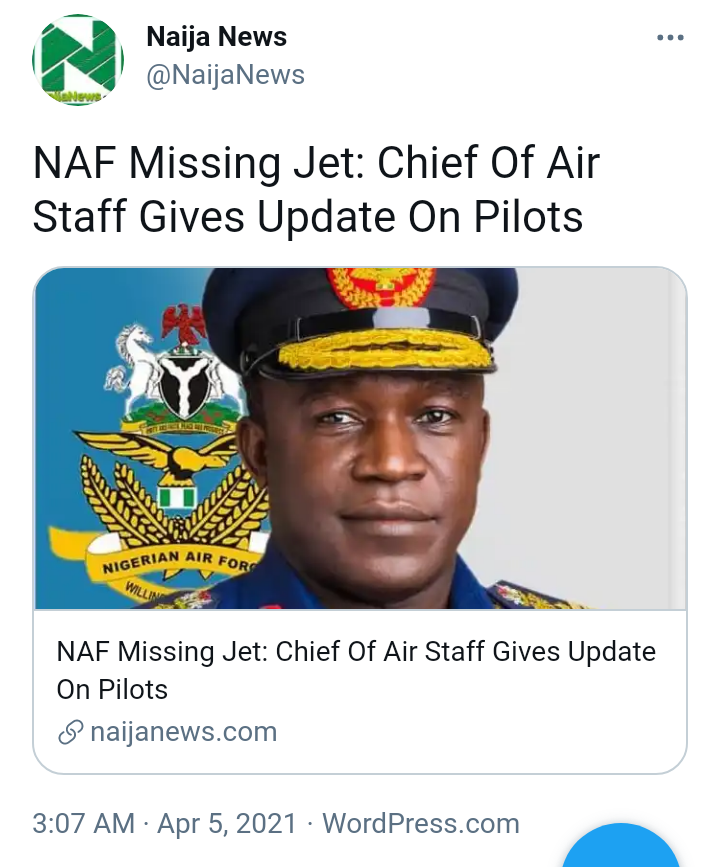 The Chief of Air Staff, Air Marshal Oladayo Amao has reiterated the stand that efforts are still ongoing to locate and rescue the pilots in the fighter jet that crashed on Wednesday.

The air chief made the revelation on Sunday in Borno while speaking with the troops of the air force component of Operation Lafiya Dole.

He also used the opportunity to emphasize the stand of the military that the purported video shared by Boko Haram where the group claimed responsibility for shooting down the missing jet is fake.

It will be recalled that the Nigerian Air Force (NAF) confirmed that one of its aircraft lost radar contact on Wednesday while on a mission in the Northeast.

Then Boko Haram terrorists on Friday claimed responsibility for the jet that was shot down and released footage showing its fighters shooting down a fighter jet mid-air.

But the military dismissed the video as fake, promising to locate the pilots onboard the jets identified as Flight Lieutenant John Abolarinwa and Flight Lieutenant Ebiakpo Chapele, as well as the possible remains of the jet itself which NAF said might have crashed.

Giving further updates on Sunday, Amao disclosed that no efforts will be spared in locating the ill-fated craft and those onboard when it crashed.

Presidency Fires Back At Bishop Kukah. 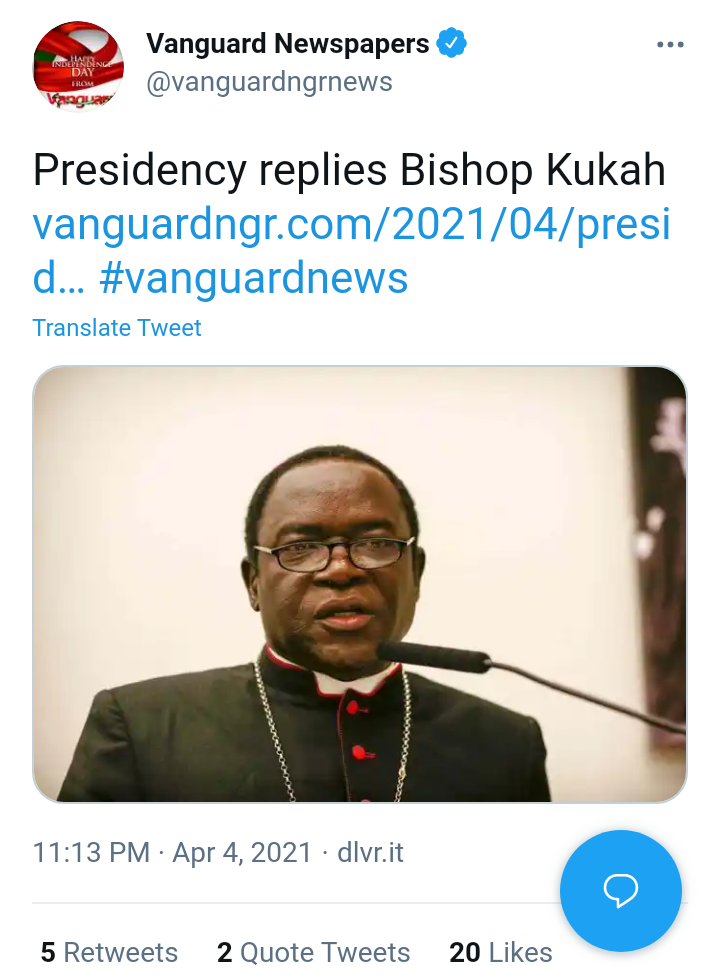 The presidency described the bashing of President Muhammedu Buhari’s administration by the Catholic Bishop of Sokoto Diocese, Matthew Hassan Kukah, as ungodly.

The Presidency in a statement issued by the Senior Special Assistant on Media and Publicity, Mallam Garba Shehu, in Abuja accused Bishop Kukah of playing partisan politics by dragging the President into it.

The Catholic cleric in his Easter message had taken a swipe at the Buhari’s administration, alleging that insecurity especially terrorism has degenerated since 2015 President Buhari came into power.

The Presidency in the statement said, “All citizens have their individual ideologies, even their own versions of truth.

What's your thought on what Buhari said?

Green Africa Airline To Start Its Operation In Abuja, Ilorin And 5 Other Routes In Nigeria

Facebook Users Drag Osita Chidoka After He Revealed What Chimamanda Adichie's Mother Did for Him.