By freechuks05 (self media writer) | 1 year ago

The 100 Achievers team has felicitated with Senator Anene Okonkwo (Agu neche mba) on his 61st birthday and described him as an Igbo man who has distinguished himself in business and politics and who deserves to be included as one of the founding fathers of modern Nigeria not just as a business man and employer of labor ,but as an astute politician whose robust contribution in making good laws for the country cannot be over emphasized. 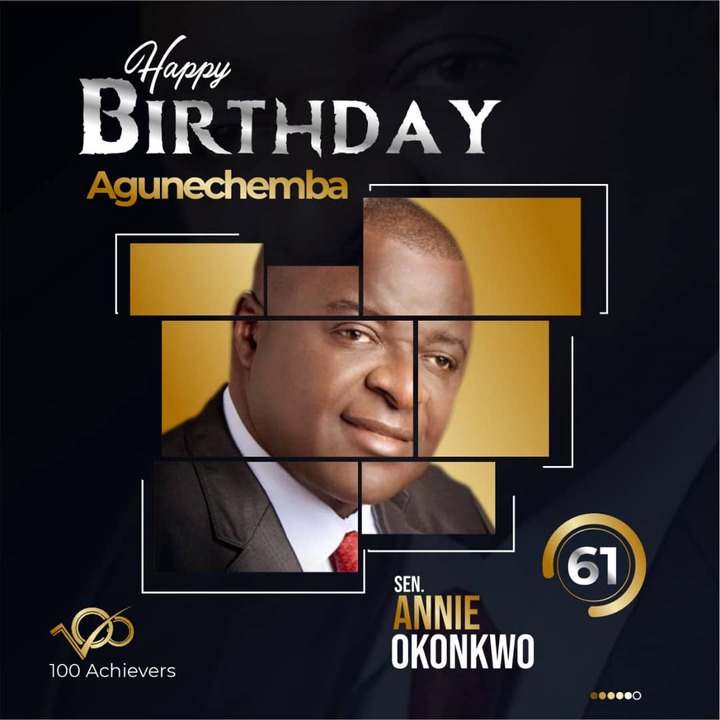 In a release my Barr. Lizzy Anyaonu, the team commended the managerial ability and business acumen of Senator Anene Okonkwo who has continued to make great waves in business for more than 40 years now, plying his trade with integrity and forthrightness.

The team stated that Senator Anene Okonkwo is among the very few politicians whose businesses have continued to survive after their foray in politics and attributed this to his clear thoughtfulness. They maintained that the younger generation of business men should endeavor to learn from Sen. Anene ,particularly how he has been able to structure his business to run without hitches even in his absence, taking direct control off his hands and getting the best hands to manage it. They praised him for the critical role he has played in the Nigerian economy through massive job creation and heavy investment in banking, hospitality, manufacturing, oil and gas, real estate and merchandise.

The group further commended his sportsmanship as a senator and praised him for the attitude he developed towards politics which is all about service and not an avenue for primitive accumulation of public resources. They thanked him for the quality representation he gave Anambra Central senatorial zone while he was representing the district, adding that the zone and his community, Ojoto benefitted a lot from his quality representation.

Senator Anene Okonkwo is a respected Igbo business man and the founder of Clemco group with interest in trade , banking , manufacturing,real estate etc. He has mentored so many young people business wise and in politics, inspiring them to reach out for the skies, and he is a stakeholder in Anambra politics.

Content created and supplied by: freechuks05 (via Opera News )