Akpabio is shaming this government

Goodswill Akpabio the crooner of "what money can not do, more money will do it" has been under fire since he was appointed the Minister of Niger Delta Affairs. The accusations against him has been coming in thick and fast since he was appointed by Buhari, allegations ranging from corruption to sexual assault has been labelled against him and it is beginning to look like he is shaming this present government. 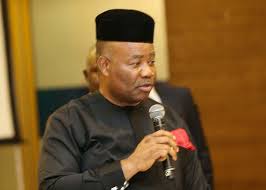 Under Akpabio's watch, over 1.49billion naira was reportedly spent by NDDC on covid-19 palliatives as early as October. You will wonder how that came to be when covid-19 was discovered in China on the 17th of November 2020, this simply means that NDDC foresaw the future and started sharing palliatives in October to its board members and some selected few people before covid-19 started ravaging planet earth. This is just one out of the possible scores of allegation against NDDC under the tutelage of Goodswill Akpabio. Joy Nunieh former NDDC boss and Goodswill Akpabio has been at daggers drawn for some time, accusations and counter accusations have been flying from all corners. Joy Nunieh accused Akpabio of corruption and sexual assault but Akpabio has denied both allegations coming from the ex NDDC boss and also played dirty by stating that Joy Nunieh has gotten married to four (4) men, that was too petty for a man of Akpabio's calibre.

These allegations and pettiness is shaming and undermining the efforts of this current administration and it needs to checkmated, now.