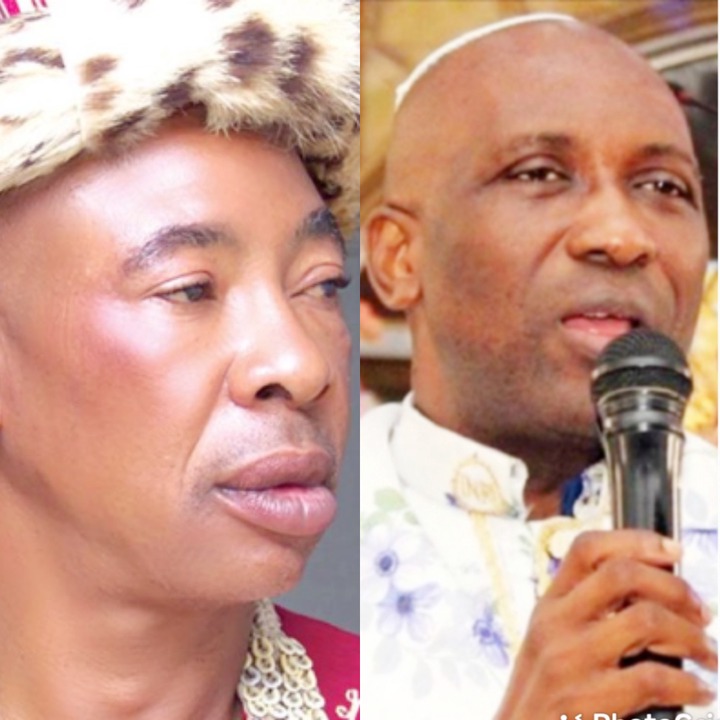 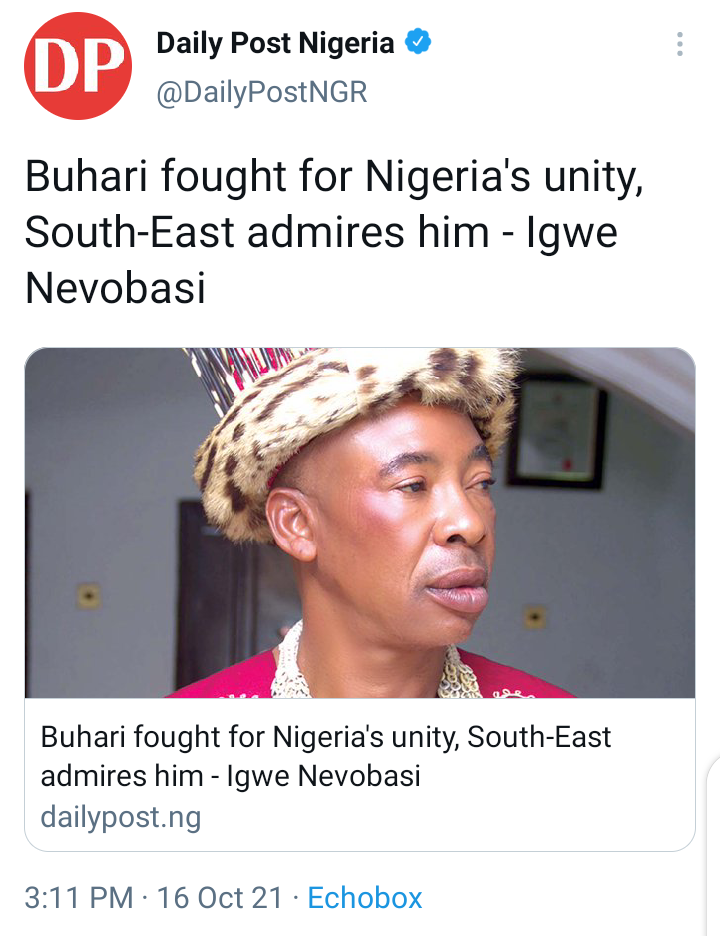 The monarch is the Ezeani II of Mmaku Kingdom in Awgu Local Government Area of Enugu State.

Nevobasi said Buhari’s gallantry is admired in the South-East and that Igbos would always welcome him.

The traditional ruler made the declaration while on a courtesy visit to Femi Adesina, a presidential media adviser.

The monarch said apart from the war, the President has done many things for the South-East, perhaps more than any of his predecessors.

He cited the Second River Niger Bridge “going on at a frenetic pace”.

“We thank President Buhari for all he has done for Nigeria in six years. It has not been easy due to many challenges, particularly security, but the good work continues.

“Igbos would always welcome and support him, and we urge him not to relent in his efforts to keep the country together”, the king added. 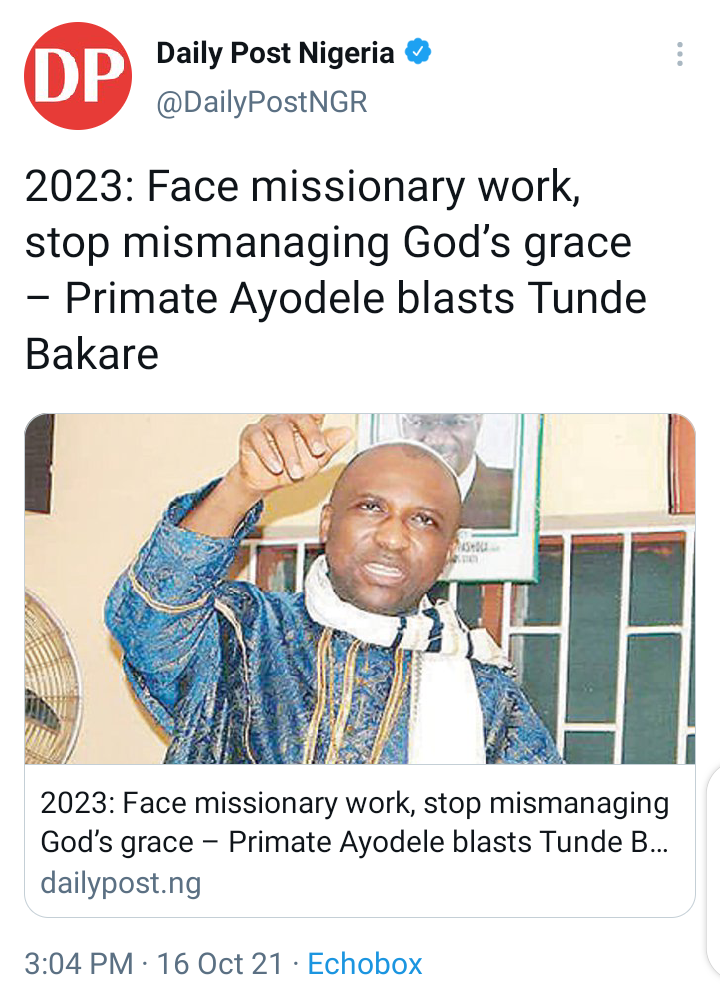 The Leader Of INRI Evangelical Spiritual Church, Primate Elijah Ayodele, on Saturday rebuked Pastor Tunde Bakare of the Citadel Global Community Church over his comment on running for president in 2023.

Primate Ayodele, who frowned at the remark, said Pastor Bakare should face his missionary work and stop mismanaging the grace of God upon his life.

Bakare had said that he will contest for the position if God and Nigerians ask him to.

Speaking at the State House after a meeting with President Muhammadu Buhari, Bakare described himself as a nation builder. 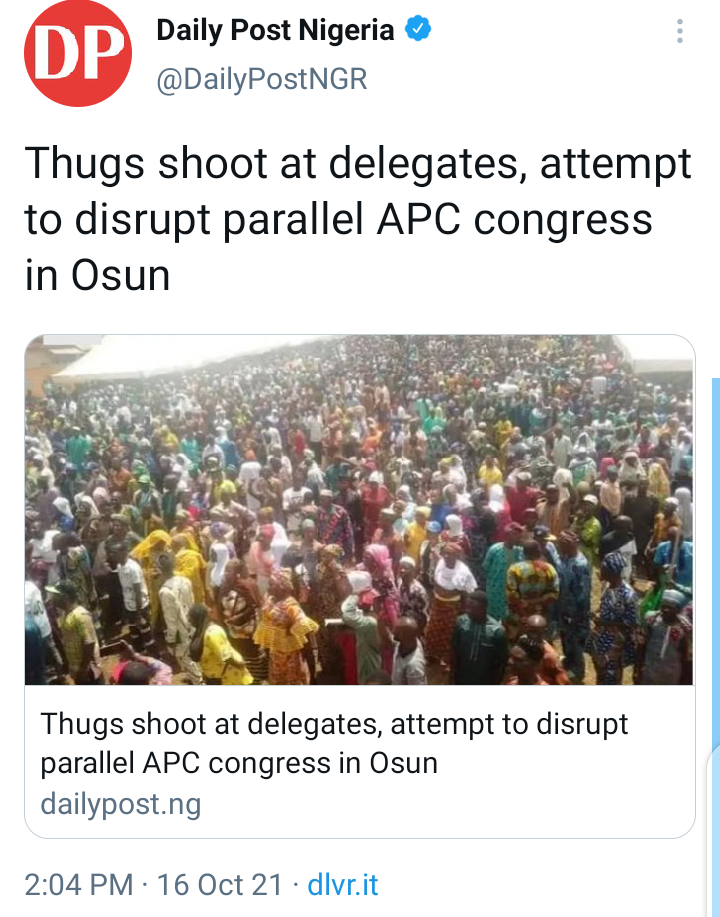 Thugs have attempted to disrupt the parallel All Progressives Congress’ State Party Congress being organised by The Osun Progressives (TOP), a caucus of the party in the state.

DAILY POST gathered that there was sporadic gunshots fired as the thugs engaged in a gun duel with personnel of the Nigerian Security and Civil Defence Corps (NSCDC).

They were however no match for the NSCDC personnel.

Recall that the Gbenga Elegbeleye-led APC State Congress Committee had scheduled the exercise for the Osogbo City Stadium by 10am while TOP slated theirs for the open space opposite LadSol Water factory, Gbongan-Ibadan road, Ogo-Oluwa, Osogbo.