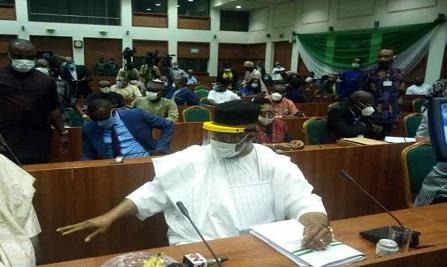 Niger Delta Affairs Minister Godswill Akpabio told the House of Representatives on Monday that about 60 percent of the contracts of the Niger Delta Development Committee, NDDC, were awarded to members of the National Assembly.

The minister made the disclosure when he appeared before the House committee investigating the NDDC. He arrived at the hearing room at 11.20 a.m.

"We have records showing that most NDDC contracts are awarded to members of the National Assembly...  You are the biggest beneficiaries," he said.

He was then interrupted by committee members who asked him to clarify further questions.

Akpabio was summoned by the House Committee for the NDDC after Joy Nunieh, a former acting director of the Commission, made some accusations against him.

Nunieh said that during her time as head of the agency she was asked to spend 10 billion naira on Christmas bonuses.

She said her rejection of the idea contributed to her dismissal from office.

"He (Akpabio) said the first thing I would do was write him a letter and he gave me the draft to put on my letterhead.

In that letter I was to write about most of the companies; [this] Senator Nwaoboshi owned all 98 companies," he said.