Flashback: Photos Of Oshiomhole And Obaseki During 2016 Campaign

By Bleedingpen (self media writer) | 2 years ago

Flashback: Photos Of Oshiomhole And Obaseki During 2016 Campaign The attached pictures shows the strong relationship that exist between Obaseki and Oshiomhole during the 2016 campaign for obaseki gubernatorial bid. he campaign process was so lively as edo residents witnessed many fun moments and brilliant dance by Oshiomhole and Obaseki on stage. It was a period everyone would love to witness over and over again as many APC governors as well as supporters of the party joined hands in mobilizing support for Obaseki and the APC in the 2016 election. 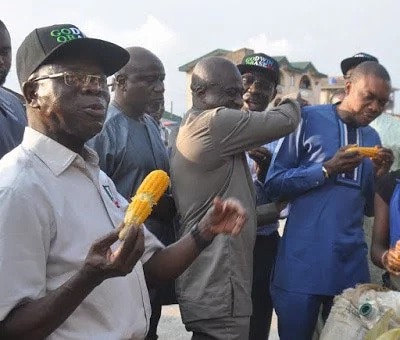 Oshiomhole and Obaseki were both members of the APC and the purpose of the campaign and rallies was to boost Obaseki's popularity in the state and also to boost his support in other to make the people see the potentials in the party as well as the candidate.

Due do the support and campaign style of the party, Obaseki won the PDP state 2016 election.