By footballmaster (self media writer) | 1 year ago

The outgoing first lady of the U.S. Melania Trump shared her and President Donald Trump's Christmas card — their final one before they leave the White House in January. However, the Christmas card managed to create a buzz with several social media users claiming Trump was not present when the photo was taken and was rather photoshopped into the picture.

In the photo, shared on the first lady's Twitter account, Trump and Melania pose next to each in matching tuxedos inside the White House. While the President wore a traditional bow tie, Melania was seen black stilettos.

The tweet read: "Merry Christmas from President Donald J. Trump and First Lady Melania Trump. @realDonaldTrump & @FLOTUS are seen December 10, in their official 2020 Christmas portrait, on the Grand Staircase of the White House in Washington, D.C." 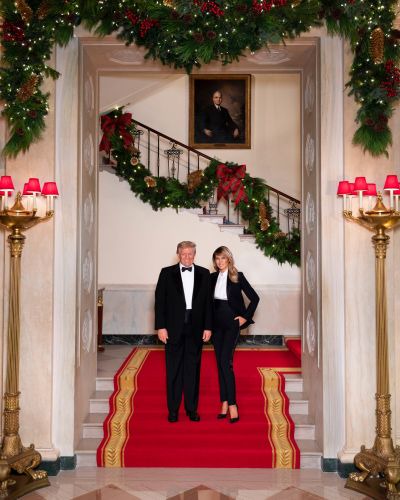 Mager continued: "There definitely has this feeling of sort of a paper cutout to the hairline for both of them, especially with the first lady. What you notice, if you zoom in close, there is really no contact between his arm and her jacket. You would expect to see some kind of pressure where two things are pushing against each other, even a little ripple in the fabric or something like that."

In 2017 and 2018 Christmas portraits, Melania wore dresses and the couple were pictured in Cross Hall. Last Christmas, the couple refrained from releasing an official Christmas card. This year's portrait came as Trump did not make a public appearance for 10 days — with the last being on Dec. 12 at West Point.