Bravery : Bodyguards who took bullets for their bosses.

By EGWAREEROBOGHENE (self media writer) | 1 year ago

Today, I will be sharing with you yet another story of some loyal bodyguards who took bullets for their bosses, some of which paid the Supreme price (died in action) and others, awarded for their act of bravery.

For the purpose of this article, I will define the word Bodyguard. Bodyguard is simply a person or group of people employed / assigned to protect or escort an important or famous person, leader, general or commander e.t.c. Having explained the meaning of the word "Bodyguard", I will list below the names of some loyal body guards who did the unbelievable to protect their boss.

1. Timothy J. McCarthy : Timothy was a formal U.S Secret Service agent who received an award of Valour in 1982 for an act of bravery during an assassination attempt on formal U.S president Reagan on Monday, March, 30,1981, in Washington, D.C .

2. Ulrich Graf: Graf was part of the security team assigned to famous German War leader "Adolf Hitler". According to Adrian Stevenson, a military expect "The Nazis were walking to the monument that honoured the Bavaria Army when police opened fire on Hitler and Graf took a bullet to the shoulder before throwing himself on Hitler, taking extra five bullets".

3. Kenneth Erau: Kenneth was the bodyguard assigned to the police spokesman A.I.G.P Andrew Felix Kaweesi. Kenneth paid the Supreme price by protecting his boss while their convoy was under attack by unknown gunmen in Kampala, Uganda. It was recorded that Erau was killed shielding his boss from the multiple bullets fired at their vehicle. Both Erau and his boss didn't survive the attack but one must say Kenneth Erau was a brave and loyal Bodyguard.

I hope with this article we remember and respect those who paid the Supreme price in protecting their superiors. One would also want to ask, if there are Bodyguards 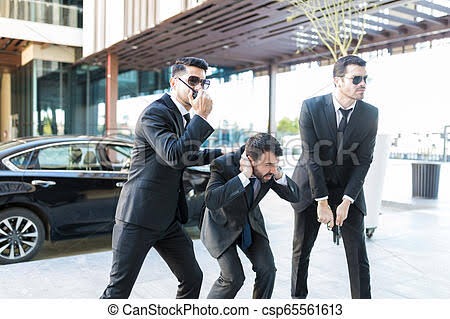 with such loyalty today.

Please your comments and ideas are always welcome.

Content created and supplied by: EGWAREEROBOGHENE (via Opera News )