By Theinvincible (self media writer) | 1 year ago

Politics in this part of the world has been referred to as a dirty game. from a Governor to being an enemy of the same political party that pronounced you fit and capable to run in 2016. 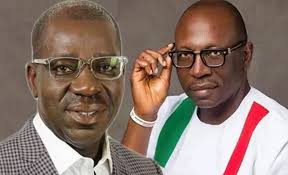 Gone are the days when best wines and food occupy the table. now, politics is all about interest, Godfather-ism, Party loyalty and Gains

Remember, Ambode did an amazing job in Lagos state, but Lagos state chapter of the All Progressive Congress denied him a return ticket because he refused to play the loyal dog.

in 2017, Governor Godwin obaseki during a press briefing with party stakeholders, he unveiled some of his projects execution which include the rehabilitation of 45 roads across the state, ongoing restructuring of the Universal Basic Education Board and the Geographical Image System (GIS) capturing of land and houses in the state to ease issuance of certificate of Occupancy(C of O). he moved on to fixing technology, rebuilding the health sector, developed welfare programs and also tried to balance the lines between party stakeholders and Governing the state.

in as much as the ordinary people of Edo state scored him 10/10, a fall out with major stakeholders including the man that made him Governor, his Excellency the honorable chairman of the All progressive congress, Adams Oshomole has caused him his return ticket.

he has missed the part that says, when you travel with your passport, no matter betides never loose it. guide it jealously like your life depends on it.

Pastor Ize-iyamu has been a politician all his life. his political doggedness and over ambitious nature will always be a plus against any political ally in the state. recall that in the build-up of Oshomole's election, Ize iyamu was appointed the Director General of his campaign train. a position he did wonderfully well by scoring a total of 18/18 local governments in the state.

A man that even almighty Oshomole needed his help twice to be a Governor in a state he did well and was already a household name. Also, his excellent performance as P.A to Governor lucky Igbenedion will always count for plenty in Edo state.

Godfatherism has come to stay, it's either we see a repeat of the Ambode vs Tinubu Episode or we get an 100% score card for the People's democratic party in the south south region...well, time will tell.