Opinion: Why The Youths Should Be Allowed To Run Any Political Position In Nigeria

The youths are eager to lead. Most are ready to run any political position in Nigeria. There are many reasons why youths should be allowed to participate in politics not only during voting. I'll discuss that here, but before then, let's talk about how the so called "Not-Too-Young-To-Run" campaign was initiated. This will be discussed According to civicus.org. Read below.

In the recent past, young people in Nigeria have been asking a question ‘When will the tomorrow that the elders promised us come?’ The inability to provide answers to this question resulted in the "Not-Too-Young-To-Run" campaign, which eventually took the form of a bill. The Not-Too-Young-To-Run initiative intended to break the elderly hegemony of political space in Nigeria. Nigeria’s democracy required reimagining to ensure the inclusive participation of young people. This would bring in fresh political ideologies, and fresh blood would enter the political system through a peaceful and legitimate movement addressing age qualification issues beyond politics.

In Nigeria, age qualification limits used to prevent young people from standing for elected positions. Oftentimes, we heard the phrase ‘Youths are the leaders of tomorrow.’ This has been common parlance in Nigeria, mostly used by elderly people and political actors to encourage young people to engage in meaningful and productive activities that would earn them a future leadership position. But in Nigeria’s public services, most top leadership positions, particularly political ones, are still occupied by elders. Most of them have occupied such positions for decades, while encouraging young people to work hard today to earn a position of leadership in the future.

These elderly men still hold their elected positions, and some of them even hope to continue to compete for political position, while those with appointed positions still expect to retain them. All of them employ the services of young people as political thugs, ballot box snatchers, bodyguards and vote canvassers, without creating space for them to participate actively in elected posts; instead, they supported a constitutional process that barred citizens under the age of 30 from running for office.

To begin a peaceful and legitimate movement to address age limitation issues beyond politics, a young opposition legislator sponsored a bill, the Not-Too-Young-To-Run Amendment Bill, which was drafted in consultation with civil society organisations (CSOs). The bill was introduced in the Nigeria Federal House of Representatives and sought to amend sections 65, 106, 131 and 177 of the 1999 Constitution in order to reduce age qualifications for the office of president from 40 to 30 years, for governor from 35 to 30, for senator from 35 to 30, and for representative from 30 to 25.

Media reporters at the National Assembly ensured that the public, and particularly CSOs, were informed about the daily proceedings - page by page, clause by clause - as the bill was discussed on the floor of the Assembly.

To draw the attention of Nigerians and motivate them to take part in demanding the passage of the bill into law, CSOs formed a national advocacy body, the Not-Too-Young-To-Run-Movement, comprising about 54 organisations across Nigeria. This coalition ensured coordinated action and sustained pressure so that the bill was passed by the National Assembly and subsequently signed by the president into law. Member CSOs embarked on targeted advocacy with the leadership of the two legislative chambers and the office of the vice president, and carried out follow-up actions, including rallies, walks, seminars in the capital, Abuja, and in state capitals across Nigeria, live radio programmes and press conferences.

All these actions were aimed at pressuring the government to support the inclusive participation of young people in elected positions. In addition, promotional materials were produced and distributed, including T-shirts and caps with the Not-Too-Young-To-Run inscription. Some Nigerians used the Not-Too-Young-To-Run badge in place of their profile picture on Facebook. WhatsApp groups were created to promote the struggle. One of the most creative initiatives was the composition of a Not-Too-Young-To-Run ringtone. Also, a few younger lawmakers in the National Assembly repeatedly displayed Not-Too-Young-To-Run placards during proceedings for the consideration of the bill.

Sustained CSO advocacy resulted in the eventual passage of the bill by the two chambers of the National Assembly, followed by concurrence in 24 state houses and presidential assent, which turned the Not-Too-Young-To-Run Bill into law. As a result, some of the stringent and discriminatory provisions of the Constitution regarding age qualifications to stand for elected political positions were relaxed; in addition, independent candidacies were also allowed.

Eventual success should not obscure the fact that poor financial support limited the mobilisation of young people in local communities to join advocacy efforts and rallies in Abuja and state capitals. In addition, advocacy and sensitisation activities were not felt at the local level, also as the result of limited funding. Thus, apathy prevailed among many young people at the grassroots level about the prospects of the bill. As a result, 12 state houses failed to endorse the bill. However, the concurrence of only 24 states was required, and this was achieved.

Practical realities limit the immediate effects of this law. Many young people believed that they would be able to access power easily, which was far from the intentions and prospects of the new law. During the signing of the Not-Too-Young-To-Run bill into law, the president said to young people: “You can aspire for President but please postpone your campaign till after 2019 elections.” What this meant was that despite signing the bill into law, the president still did not want young people to compete with him in a presidential race. Far from being over, then, the campaign is now one to mobilise the young to run. This is the right time for young people to capitalise on the Not-Too-Young-To-Run law to act and make the necessary adjustments to their respective ambitions to align with the new trend.

Many actions are still required to mobilise young people to run for elected positions. These include encouraging young people to track illicit campaign funds and unaccountable political funding, which is one of the major hindrances pushing young people further away from access to power. Unless this is done, old politicians who have amassed immeasurable wealth from looting the treasury while in power will continue to dominate the political scene.

Additionally, CSOs are still in need of capacity strengthening, information and learning exchange visits and financial support, in order to sustain their advocacy to ensure that young people are readily available with improved skills and knowledge to contest, win and handle political positions.

The experience of campaigning for the new law taught us that coordinated strategic action may bring about a desired and lasting political change. The Not-Too-Young-To-Run coalition enhanced the reach of advocacy efforts, enabled greater efficiency and effectiveness by combining resources and skills, leveraged the comparative advantages of each member and reduced duplication. Stronger civil society coalitions are the way to go for future endeavours aimed at improving democratic practices and consolidating democracy across the nations of the world.

Why the youths should be allowed to run any political position

If you are a youth and you are not tired of waiting for the future, when you will eventually become the leader, well many youths are tired of waiting. When will this tomorrow come? No one knows.

My reasons for the Youths to be given the opportunity to handle high political position are:

1. We have more learned youths who are well exposed to the society. The youths knows their ways around any new or old development especially, technology.

2. The youths are vibrant. The youths are very active in virtually everything. Ranging from thinking to implementation of new programs. The youths are energetic which should be one of the primary prerequisites to becoming a president or governor or any other political position.

4. Leadership (politics) in Nigeria wouldn't have been possible without the youths. This is why most politicians (old) use youths as their PA, errand boy or girl, ballot snatchers and so on. Now you understand what I'm saying right? Youths are only called to play when the game involves muscles and brain. Too bad.

5. Our elders should be advisers to the youths and not their rivals. Competing with the youths as elders would only make the youths to give up so as to perhaps, not offend the elders. Or because there's no enough financial support for the youth.

If you read the above four points carefully and with unbiased mind, if you can read them with love for the youths and try as much as possible to decipher and understand vividly the hidden information in the points, then you will agree with me that the youths deserve the posts our elders have been handling till date. 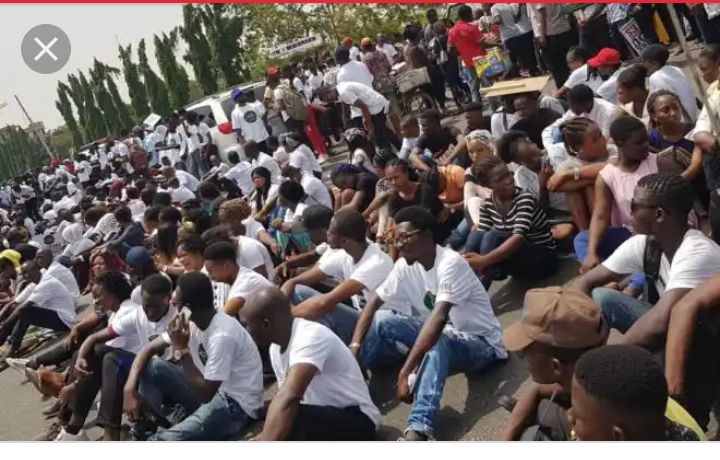 Therefore, dear fellow youth compatriots, if you can't lead or rule, please join the advocacy group. But if you can lead, why not come out? Don't be shy. May God bless the youths exorbitantly. AMEN!

Let us know what you have to say in the comment section.