See what late President Yar'Adua told his wife before he died

By Ereporter (self media writer) | 2 years ago

See what late President Yar'Adua told his wife before he died. 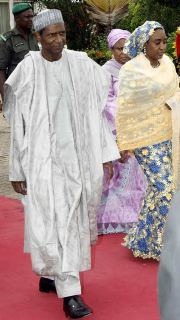 Though he is long gone, some Nigerians still wish he never died. Nigerians still believe his 7-points agenda mentioned during his campaign in 2007 in Lagos would have come to pass if he was still alive. He restored decency into our economy and the political line. Corruption was on its way to becoming a thing of the past.

Before he gave up his last breath, he gave his wife his word. He said to his wife I wonder what happened after my death,  you will have to quarrel with my family trying to change their mind set of me leaving a lot of money in my possession. Why is it a normal thing in every tribe in Nigeria. When a rich man dies, the family both known and unknown show up to claim part of the properties. If only the late President Umaru Musa Yar'Adua was alive, maybe Nigeria would be in a better position, who knows.

Content created and supplied by: Ereporter (via Opera News )