FORMER National Chairman of the All Progressives Congress, APC, Adams Aliyu Oshiomhole must have been shocked at the crowd that that welcomed him to his native Iyamho, a bubbling settlement on the Abuja-Auchi Expressway that assumed global significance when Oshiomhole  located a university in the village. Thousands of people turned out to the delight of Oshiomhole who spends these days wandering in his political wilderness.

Oshiomhole, wearing a face mask, was the only reminder of the existence of the coronavirus as he grabbed his opportunity for the headlines. It was like the days of no social distancing. The people had no worries, their hero was home. At a point, Oshiomhole removed the face mask to assure the people, “na me”.

After the loss of his national chairmanship of APC, his remaining chance at relevance is the 2020 Edo State governorship election that is billed for 19 September. "Because Obaseki lost APC ticket, he joined our opponents, his only mission is Govt House. Nothing more. I lost d Chairmanship but here I am still remaining a Progressive. That's the training we have, we don't go to Church to look for miracles, we go to worship God,” Oshiomhole tweeted.

The warning shot indicates a campaign that will witness the regurgitation of a lot of bile. It is a sphere of competence for Oshiomhole though more complicated than he had imagined when he was in Godwin Obaseki’s corner in 2016 and lambasting Pastor Osagie Ize-Iyamu, the 2020 APC candidate. He said Ize-Iyamu did not measure up to Obaseki in any manner, among worse things he said about the man, who left APC in 2016 for the opposition Peoples Democratic Party, PDP.

Oshiomhole’s support of Ize-Iyamu as replacement for Obaseki was the precipitating factor in Oshiomhole’s loss of his plum seat aa national party chairman, suspended by a mere Ward Chairman. The December 2019 suspension of Oshiomhole seemed like a joke until courts confirmed that he could not serve as party chairman while on suspension. President Mohammadu Buhari finally halted any Oshiomhole moves with the disbandment of APC’s National Executive Committee.

Stephen Oshawo, Chairman of the Ward 10, Etsako West Local Government Area chapter of the All Progressives Congress, APC in Edo State, on Thursday explained his suspension of Oshiomole. “As a Chairman to the Governor of the State, I couldn’t receive my gratuity as a pensioner and as a Chairman to Oshiomhole when he was still the governor of the state, I was not able to get my pension for eight months but when Godwin Obaseki came in, it didn’t take him up to a month, he paid my gratuity and not only me but all the pensioners in Edo State. There is nobody he is owing and if you are retiring today, next month you are receiving your pension,” Oshawo said at an award ceremony in Benin City.

Pensions could be an issue in the campaigns. A video of an elderly women has been in the social media. She castigated Oshiomhole for not paying her pensions when he was Governor.

The social media were also buzzing with the return of Oshiomole, his first visit home since his electoral ward suspended him. “The homecoming (of) an EAGLE. Welcome back home @A_Oshiomhole. Edo people love you,” Ize-Iyamu tweeted. Oshiomhole is still searching for a handle on which to amend the damaging campaign messages he shared on Ize-Iyamu in 2016. It is not easy considering that his opponent Godwin Obaseki has established a viewing spot on Ring Road, Benin City, where the reminders are on display round the clock.

Oshiomhole unsparingly berated Obaseki to mark his return. He was in the spirit of the 2016 campaign. “Few weeks earlier, the snake said APC was his house and that he was not leaving, but less than 72 hours after saying this, he left. If we had burnt the house because the snake was giving us problem, we will all have been homeless by now,” said Oshiomhole, who claimed that his immediate task was to ensure APC’s victory on 19 September.

“I have come home for only one project; I am not going back to Abuja until the project is completed.” The project is to recover Edo State from PDP.

He accused Obaseki of not executing a single contract in almost four years. He said all Obaseki had done was to sign MOUs. “While Pastor Ize-Iyamu is busy selling his Simple Agenda, letting people know his plans for Edo State, Obaseki is busy selling propaganda because he has no agenda to sell, he never had any at any time. #Correction2020,” Oshiomhole stated in another tweet.

Obaseki’s Special Adviser on Media and Communication Strategy, Mr. Crusoe Osagie, retorted, “If Oshiomhole had made any mistake in supporting Obaseki in 2016, it is to the extent that he thought that the Governor will submit himself as a tool to be used to hold the collective will and best interest of all Edo people hostage and for this Obaseki owes Oshiomhole no apologies because the interest of Edo people is and will always be greater than the interest of one man”.

“The EAGLE has landed. The political gladiator, the ever rugged, dogged and the JAGABAN of South South politic has landed. Clear road for Oshio Earthquake. The cat with 9 lives...Ladies and gentlemen, Oshiomhole has landed and everywhere see face with tears of joys,” an Oshiomhole supporter gushed on Twitter.

“I wanted to come in at night, I can sneak in quietly, so that tomorrow, we can meet. I’m very pleasantly surprised that these thousands of people are already waiting for me,” Oshiomole told the Iyamho gathering. More people lined the roads to see him as he returned.

Another Twitter user wondered why Oshiomhole had to come into Iyamho at night, sneaking into his own home. There were other concerns.

The crowd that welcomed Oshiomhole made no efforts at maintaining the coronavirus protocols. People surged and mixed freely as they wished. The Iyamho reception points to challenges of running election campaigns in the midst of the pandemic.

Oshiomhole has stirred the campaign. Questions that await his attention would include how Ize-Iyamu has become a saint from 2016 when he was a sinner. 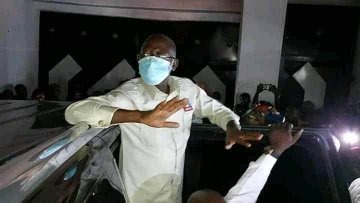 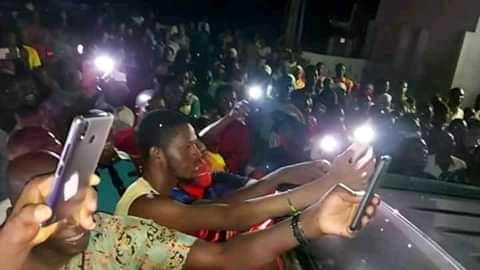 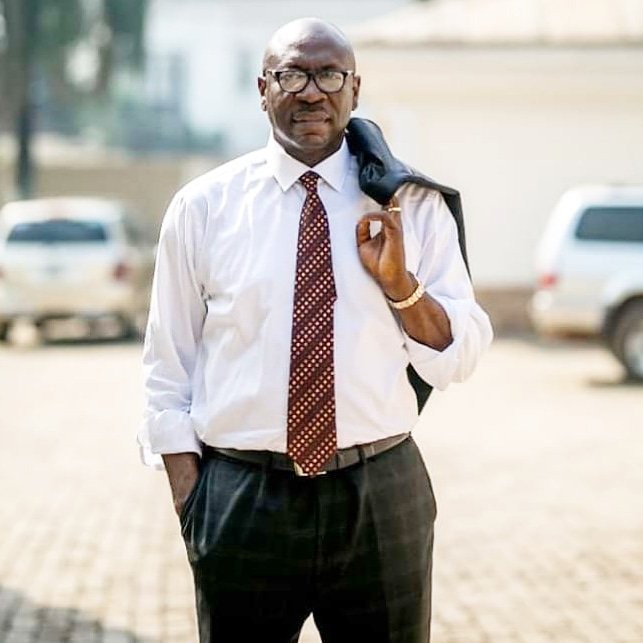 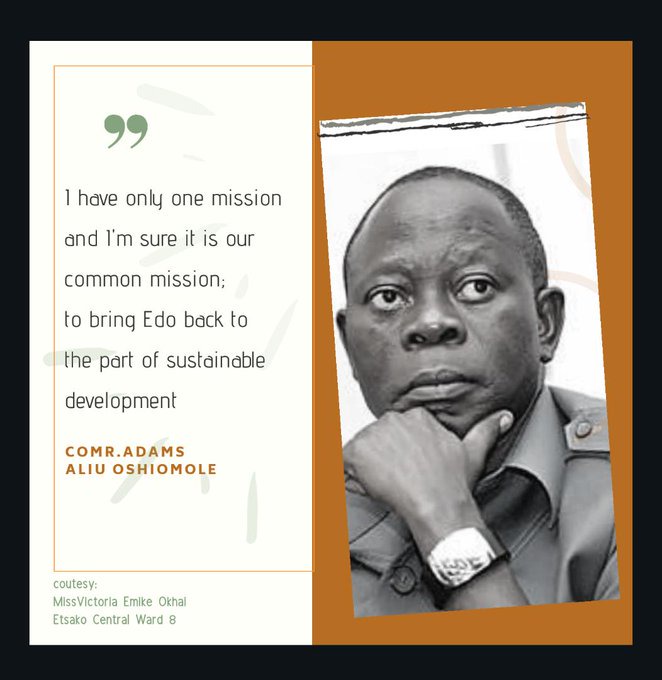