By Opzygtr (self media writer) | 2 years ago 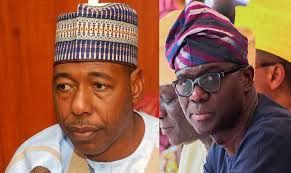 Sometimes, it takes a national crisis to change what’s fashionable in politics.

Nigeria governors are playing an outsized role in day-to-day life across the country, and have emerged on the frontlines of efforts to curb the coronavirus pandemic. Governors are in charge of making these life and death decisions.

In this article, we will be looking at some of the top governors who deal very well with the crisis.

Below are the lists of the most visible governors during the pandemic: The Oyo state governor has received the lion’s share of attention, as his informative and emotive press conferences have made him an overnight national political star. But his record in responding to the crisis is more complicated. his coronavirus containment policies were not the most aggressive in the country. He hesitated to close all sectors statewide even as other states began to do so, he made his stance and allow major sectors in the state to be opened.

Despite not receiving enough attention from the federal government, he really tried his possible best and become a 'pace setter' for every state including the federal government. He is in total control of the media in the state, and made enough awareness so people could follow the protocols put in place.

He his the first governor to ease lockdown, let workers resume work and open schools. At first, he didn't handled the situation well but he later redeemed his image. To his credit, he appointed a consummate professional in the person of Akin Abayomi (a pathologist and specialist in internal medicines, haematology, environmental health and biobanking) in the role of the health commissioner and allowed him to be the face of the fight against the pandemic.

He put measures in place to strictly enforce travel restrictions.

On March 19, 2020, Sanwo-Olu limited gatherings and events to no more than 50 people and ensured appropriate social distancing must be observed.

He ordered schools and religious gatherings to be closed down and deployed disinfectant equipment to fumigate the entire state.

The governor’s handling of the pandemic has earned him the people’s trust and support. The governor of Ebonyi state had also caught the attention of many. Umahi laid measures to enhance and prompt response to the pandemic and make commendable interventions in the health sector of the state.

He set a target to get all the 13 General Hospitals in the state to be functional. He also completed world-class Isolation Centre and Virology Centre in Abakaliki and equipped it with lasting medical equipment and its capacity strengthened to handle complex medical needs of the people to serve the need of the entire Southeastern zone of the country.

He his such an exemplary leader. The Governor of Abia State, Okezie Ikpeazu, has been relentless in the fight to curb the spread of the disease through massive awareness campaign and provision of palliatives. He also didn't stop infrastructural projects in the state during this pandemic.

The governor didn't relent in evolving policies that will prove the well being of the people of Abia. Governor Babagana Zulum of Borno state, is the only northern governor everyone kept shouting.

He inaugurated a 25-man Task Force to coordinate and fast-track state-wide activities geared towards preventing an outbreak and response if it occurs. The governor is seen as a fast implement leader due to his response to the pandemic and his various projects erected in the state.

The Borno state governor leave no stone unturned to ensure that vulnerable populations including IDPs and members of the host communities are protected from COVID.

Which among the governors do you think perform most and respond well to the pandemic?