Tinubu will run for President in 2023 [Opinion]

There's been so much talk concerning a Tinubu presidency lately. Don't dismiss the rumours just yet. Over a meal of fresh fish pepper soup and cold beer on the banks of the Lagos lagoon one moonlit night, I asked one ally of Asiwaju Bola Ahmed Tinubu if he thinks the man is seriously considering a presidential run in 2023.

He laughed so hard and loud, choked on his beer and pepper soup and ended up misty eyed from too much laughter.

When he eventually got round to answering my question, I was expecting a flat out denial and a friendly rebuke about knowing better than to believe ‘fake news.’ Instead, my friend ordered for more beer and pepper soup and posed a question of his own: “Now tell me, is Tinubu not qualified to run for president? Is he not a Nigerian?”

It is a rhetorical question thrown my way every time I ask an APC faithful or chieftain if the man, Jagaban, is seriously mulling a presidential run in 2023.

For all his flaws, no one has played smarter politics in Nigeria since 1999 than Tinubu, the southwest godfather. The game comes naturally to him. He is ever the chess or grand master.

From his southwest base, Tinubu has handpicked governors, ministers, senators, a president and a vice president. He has also sacked governors, a party chairman, a president, a senate president, annihilated political opponents, ended careers of those who wouldn’t do his bidding and made Nigeria’s commercial capital city of Lagos his own--all on a whim.

His Bourdillon Lagos address often mills with party faithful and hangers-on looking for favors. No politician wields as much influence as Tinubu does today. He may be looking at wielding all of that influence from the center.

The Tinubu campaign posters are really a thing

I first noticed Tinubu’s 2023 presidency campaign posters in the Ogba, Lagos area in July of 2019.

It is also instructive that when APC Chairman, Adams Oshiomhole, was asked about the posters, he didn’t rule out a Tinubu presidential run. He only said it wasn’t time to discuss the subject.

“At this point in time, all hands must be on deck to support President Muhammadu Buhari and all our state governors in their respective states to work together unanimously to deliver for the good of our people in the states and at the federal level,” Oshiomhole said. It is also worth noting that Tinubu has not ruled out a presidential run in 2023 or denied the posters. For a man who always has a lot to say about governance and politics, he’s evaded rumours of his own presidential run like a landmine.

Instead, political allies have been dropping hints in the press with an uncanny regularity, you are almost certain they are only acting out their roles in a grand script.

"In the South-West today, the tallest person politically can’t be better than Asiwaju Bola Tinubu, so I will encourage and plead with him to run for the office of president. I know his antecedents, I know his pedigree and I know he can run the affairs of Nigeria effectively and smoothly. Look at the financial engineering foundation he laid for Lagos State, which explains why governors that came after him found it easy to run the affairs of the state,” says APC chieftain Lanre Rasaq. 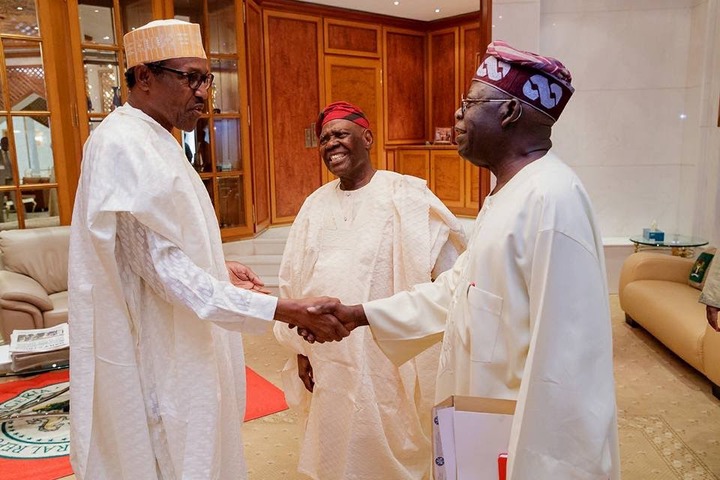 For former Minister of Works, Adeseye Ogunlewe, “Tinubu is the most prominent Yoruba person that has paid his dues and is knowledgeable about the politics of Nigeria. I am confident he can lead Nigeria well if he becomes president.”

These remarks are not emerging out of nowhere for sure. The southwest APC is positioning itself for the presidency in 2023 based on a rotational arrangement in the polity. At the moment, only Vice President Yemi Osinbajo and of course Tinubu, look like they want the job when it makes its way down south. And everyone knows that Osinbajo defers to Tinubu on all matters politics. If Tinubu wants the job, best believe Osinbajo would be stepping aside for ‘Oga’ to have a go.

Those who say Tinubu should be content with playing the statesman or godfather role for the remainder of his years, appear to have forgotten that Tinubu schemed to be Buhari’s running mate before the 2015 presidential vote.

The only reason he had to cede the role to Osinbajo was because he is Muslim. The APC didn’t think it was going to win a national election with two Muslims at the head of its ticket.

In February of 2019, then Senate President Bukola Saraki disclosed that he fell out with Tinubu because he stood up to the Jagaban as he schemed for the running mate position that eventually fell to Osinbajo.

Saraki had said: “As for Tinubu, we have never expected any good words from him. All his life, he will continue to belly ache and nurse grudges over my opposition to the Muslim-Muslim ticket idea in 2015. As far as he is concerned, I stopped him from realizing his ambition then. However, I believe my action then and now is in pursuit of national interest. Again, I supported President Buhari in 2015 because I believe he could make a positive change.”

After it became evident that the Muslim-Muslim ticket was never going to fly and was vehemently opposed within the APC, Tinubu put forward Osinbajo, a pastor of the Redeemed Christian Church of God and his former Justice Minister in Lagos, for the vice presidency role. The rest, as they say, is history. So, yeah, my friend may have laughed me off and spilled some of his beer on me, but it will be political naivety to assume that Tinubu isn’t seriously considering this thing. What has he got to lose, really? Tinubu will be 70 by the time the 2023 elections come around and the last we checked, the two front-runners in the 2019 presidential vote were on the wrong side of 70.

Baba should be forgiven as well if he thinks he's still got age on his side and more political gimmicks beneath his agbada.