Opinion: Why South-East Governors Must Take A Serious Action About The Sit-at-home Exercise

By NollymoviesPlanetTV (self media writer) | 18 days ago

The sit-at-home declared in the south eastern part of the country for over four weeks now, has continued to generate mixed reactions and feelings from different quarters in the country, especially in the region were the exercise is being observed.

Well, there are different versions of news regarding the exercise, of which some say the exercise has been called off by the Indigenous People of Biafra (IPOB), while some others insist that the exercise must continue to hold every Monday of the week, until their leader, Mazi Nnamdi Kanu is released. Amidst all these, the exercise is yet to be suspended completely in the region.

But be that as it may, the time is right for the governors of the various states in the region to quickly prevail over the sit-at-home order/exercise, most especially before it degenerates into something more bizare or beyond control.

First of all, it is obvious to everybody that hoodlums and criminal elements have indeed captilized on that loophole in that part of the country, to commit all sort of evil, crimes, atrocities, etc, all in the name of enforcing the sit-at-home order. In fact, there's hardly any Monday that one unpleasant story or the other is not reported from the region.

For instance, just like that of yesterday, September 27, 2021, Punch newspaper reported how a vehicle conveying food items was allegedly set ablaze in Enugu State, by those reportedly enforcing the sit-at-home order. According to Punch newspaper, the vehicle that was attacked at Edem junction, Ibeagwa in Enugu East Local Government Area of Enugu state, was reportedly conveying food items like vegetables, tomatoes, and others, before it was attacked by unidentified criminal elements in the guise of enforcing the sit-at-home order.

First and foremost, is the sit-at-home an official declaration by the government? Why then must hoodlums and criminal elements be allowed to continue causing havoc in the name of enforcing an anti-government exercise? Some time ago, same hoodlums attacked a secondary school in Imo State, chased away students that were writing their Junior WAEC, all in the name of enforcing the same sit-at-home, and a lot of other worse or similar experiences.

And the truth remains that, it is this same issue of attack from these hoodlums and other criminal elements who claims to be enforcing the sit-at-home order, is one of the major reasons why many people in the region have continued to observe the order/exercise. The fear of the unknown has forced a lot of them to sit at home on Mondays, yes, because no one wants to become a victim. 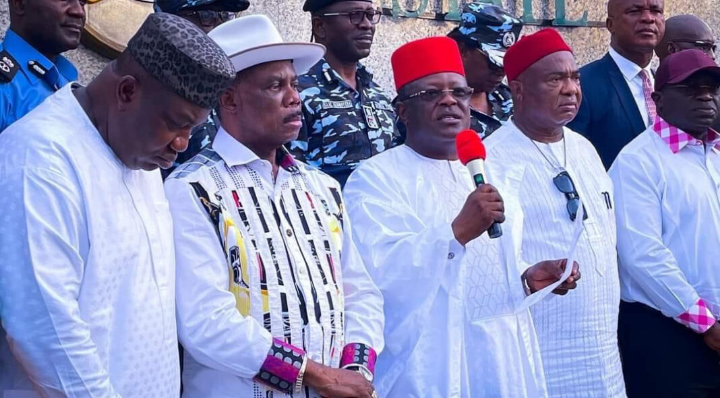 This thing is no longer funny in any way, and should not be underrated or tolerated any further. Most of the big security challenges facing the country at the moment, like the Boko Haram insurgency, banditry in some parts of the North, farmers-herders clash, kidnapping, etc, started just like this. And because there were not well handled at the initial stage, then it degenerated into what we have today.

Therefore, whatever the governors of the region must do to tackle this matter as urgent as possible should be done without further delay. With the way the whole thing is going, it should be a big source of worry to every right thinking person in the region, be it political, religious, traditional leaders, business people, students, etc. It should be everybody's worry!

We cannot afford to allow hoodlums and criminal elements hold the region to a hostage. Yes, because if we allow them to continue gaining more grounds everyday, then we should get ready to witness a far worse case scenario.