By FrankUlom (self media writer) | 1 year ago 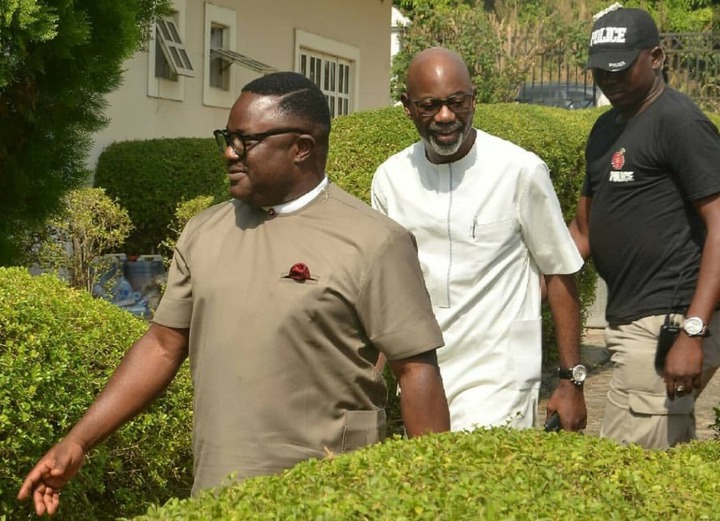 ...says PDP is toothless in Cross River State and the recent defection is delusional.

The All Progressives Congress, APC has described the immediate past Cross River State Governor, Sen. Liyel Imoke as being "arrogant" for saying he singlehandedly planted a successor (Sen. Ben Ayade) in the Diamond Hill House.

This was made known by Erasmus Ekpang, State Publicity Secretary-Elect of APC, Cross River State Chapter on Monday, who added that Imoke is leaving in regrets.

"We have received with appalling shock the senseless statement credited to the immediate past Governor of Cross River State, Senator Liyel Imoke alleging that 'we' made Senator Prof. Ben Ayade Governor in 2015 and that it was his 'mistake'. One will have imagined that such misgivings will be quickly debunked by the 'former' Governor but no, Imoke will say anything to be considered relevant and most importantly, he will continue to deceive all those whom he exploits for political relevance.

"To say he (Imoke) made Ayade Governor is abusing the tenets of our democracy is to say that Cross Riverians did not vote, and their choices did not matter and he inadvertently decided the fate of the over four million Cross Riverians. How arrogant!

"It is impossible to think that a man who seeks to take glory for singlehandedly making one a Governor, should be taken seriously when anyone thinks of the PDP as one that practices internal democracy.

"What Imoke regrets is leaving office, not being addressed as Governor, not being worshipped and adored as usual by everyone, the impunity with which he decided who gets tickets and especially, sharing it to his friends and cronies throughout his eight-year reign as Governor.

"As a transiting Governor, Imoke's role was just natural concomitant, a last-minute attempt at saving his face and nothing more. He should stop fanning his ego that he made Ayade Governor, and stop misleading Cross Riverians on his stake, as even unfolding events in his party, shows that the PDP does not take him seriously.

"It is worrisome that while his predecessor Donald Duke quitted office, leaving Imoke the freewill to drive his administration, Imoke has always sought to still (selfishly) control state apparatus and exert undue influence over party matters to his own cupidinous political self ends.

"It is important to remind all that, the PDP also lost the state to the ruling All Progressives Congress due to Imoke's amoral handling of the internal crisis, as even alluded by Nyesom Wike of Rivers State right before him in his own birthday symposium; that Imoke will graciously fan any conflict as long as it brings him relevance.

"We can advise judging from his antecedents that the Ex-Governor should do well to heal from the post office trauma and realise that a new sheriff is in charge, and just like he knows, and used the Office of Governor without interference, Ayade deserves a break from his constant bickering and whining.

"He should rather focus on being a statesman who would proffer counsel to successive administrations and not a political party propaganda machinery joining issues at every little opportunity.

"While we do not want to present the 8 years of Liyel Imoke to Cross Riverians for proper treatment to be meted to him for his nefarious, villainous and inglorious squandermania as an emperor, we also understand that he is seriously labouring under the ignominious influence of what the Port Harcourt affiliate rascals in Cross River State have put him into his black pot Papa Deceive Pikin (PDP). He should accept his present condition as a comeuppance and keep our dear Governor Ayade out of his present lachrymose", Ekpang said.

The APC mouthpiece also described the defection of 5,000 persons to the PDP in Ogoja during the Thanksgiving Mass of Sen. Jarigbe Agom, as delusional.

"Similarly, we consider the reports of some 5,000 defectors yesterday to PDP laughable; can the Cross River State Chapter of the PDP furnish the public with names of the 5,000 defectors? These are their usual lies from the pit of hell!

"To say that the baby opposition Chairman, Venatius Ikem who did not himself contest elections, would imagine that Senator Jarigbe who could not muster enough votes to win a primary election, save for the mercenaries of the court, will turn a church service crowd into a gathering of defectors. Vena had no better word than to allude that Jarigbe couldn't have won, but erroneously called the mandate a 'gift from God' when it was in truth a 'stolen mandate' from the courts.

"That the PDP will do anything to be considered to have followership is an indication that they still either haven't woken up to the realities that they are now an opposition, or have decided to continue deceiving themselves. If anyone wants to take them seriously they should provide the list of the 5,000 defectors or stop misleading the media with pictures from the church congregations.

"As at last count, only two persons joined the dying PDP - Gabe Ugor and Peter Oti. How can Peter Oti who was never a member of our great party, the APC, be said to have defected from a party he was never a member of? It sparks the self-contradiction of the opposition party to think they can deceive Cross Riverians to believe that they are relevant", he added.

Content created and supplied by: FrankUlom (via Opera News )