By BHG-InfoDesk (self media writer) | 26 days ago 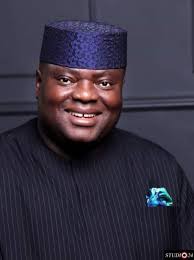 A political group, Armstrong Association, Southern Cross River has mocked the senator representing the central senatorial district of the state over his comments on zoning.

President of the group, Effiom Asuquo while reacting to the lawmaker’s comments said in his desperate attempt to become governor of the State, Senator Sandy Onor inadvertently accepted the zoning principle that power should return to southern Cross River and even accepted to become a candidate of the south.

Senator Sandy, in a world symposium to commemorate the death of Late Ntufam Patrick Oquagbor, the Ndidem of the Qua and Royal Patriarch of the Ejagham Nation, had asserted that assuming, the next Governorship of the State was an exclusive right of Southern Senatorial District, he was as well, eminently qualified to run because his mother is biologically from Akamkpa Local Government Area in the Southern Senatorial District. He further elaborated that this political dimension was a given, because both the Efik and Ejagham – as well as many other nationalities of Cross River State – are matrilineal in inheritance, these placing mothers as pre-eminent.

But in a swift reaction, Effiom Asuquo said the lawmaker “displayed the power of intellectualism and oratory he is known for into a self-serving revelation with immense unintended consequences”

He went further to say, “propelled by the petrodollar assurances of the Rivers State Governor’s support for his gubernatorial ambition, and buoyed by a few happenstances, he has begun celebrating his victory over a year into the schedule. In an attempt to eliminate what seems to be the only impervious obstacle on his way to the dreamland, the much talked about zoning principle, his intellectualism let him down by forcing him to inadvertently confirm its reality.

“For the first time, Cross Riverians heard from the Distinguished Senator the maternal background of his roots, for no other reason than to profit from the obvious truth of a Southern turn in the rotational game.

“Let Cross Riverians now know it that Senator Sandy Onor is, in accepting the rotational principle, seeking office as Governor as a candidate from the South. Central Senatorial zone may be gracious enough to allow him to continue representing them for the very last time as he is now more Southern than Central”

According to Mr. Asuquo “It is now, given the acceptance of this fundamental fact, laid to rest the heated question of rotation or zoning and a natural focus of our search for the most credible candidate from the South to vote to Government House”

The issue of zoning has continued to adorn the frontline of political discussion across Cross River State as the 2023 elections draw close.

Content created and supplied by: BHG-InfoDesk (via Opera News )