By Izonkeme (self media writer) | 6 months ago

The Punch newspaper has established the authenticity of a viral photo showing the Senator representing Delta South Senatorial Districts kneeling down before a former Governor of the State. 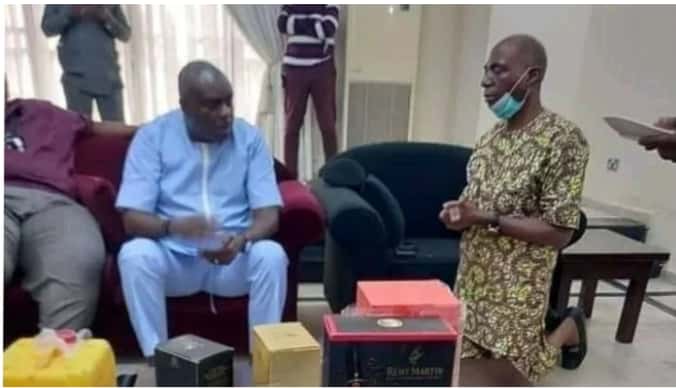 In the picture that has been circulating online the Senator, James Manager could be seen kneeling down before James Ibori. The Punch noted that an associate to the senator confirmed the photo to them saying it was just a sign of respect in Urhobo culture.

He was quoted as saying that Mr Manager went to pay a visit to Ibori - who is his senior, a king and moreover, his former boss.

So whenever you go to pay homage to an Urhobo elder or someone you hold in high esteem, you kneel down, he added.

While noting that the pair have a personal relationship, he wondered why the issue is being blown up on social media as no one would have expected the Senator to stand up and address Ibori.

He buttressed his point by alluding to the drinks on the table saying that Mr Manager only went to pay homage to Ibori whom he had not seen for long and brought the drinks.

After the picture was seen online, social media users started to speculate that the Senator was seeking endorsement from the former Governor in the upcoming 2023 Governorship elections.

Ibori had ruled Delta State for two terms from 1999 to 2007 but was however convicted in a London court for money laundering in 2012. He was however freed after serving just 4 years out of his 13 years jail sentence in 2016.

While Manager is one of the longest serving Senator in the country having been there since 2003 and is believed to be a protege of Ibori.

Even though he is an ex convict, Ibori has continued to be a force to reckon with in the politics of Delta State.

Content created and supplied by: Izonkeme (via Opera News )