By Caidozenan (self media writer) | 4 months ago 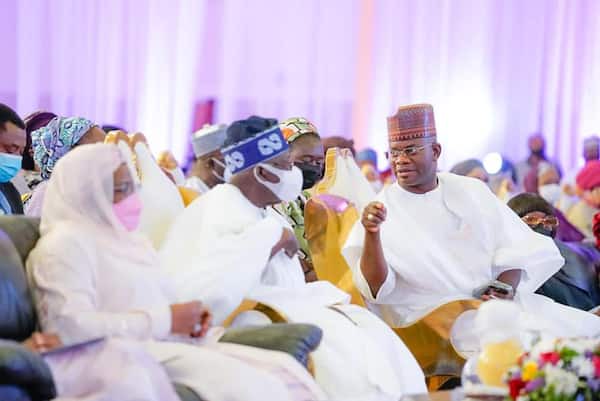 The recent war of words between Governor Yahaya Bello support group (GYB2PYB), and that of Tinubu Support Group (TSG), which originated from the suggestion of Governor Yahaya Bello, that Tinubu should drop his 2023 presidential ambition for a younger person, is unnecessary as it is ridiculous.

Firstly, the issue is unnecessary, as Tinubu who is currently receiving medical attention in London, have not declared any intention to contest the 2023 presidential election, although many believed, that his body language far more exposes his interest.

Secondly, the All Progressive Congress, APC, is yet to decide the zone, where the next aspirant will emerge from. The issue of zoning though not expressly documented in our constitution, yet it is an important but silent factor, that directs nominations in all the parties in Nigeria.

Thirdly, even if the Asiwaju, by any means, wants to bestow his interest to contest, the 2023 presidential election to a younger person, his consideration will first be on the many able young men and women, he had projected to political limelight, rather than Yahaya Bello.

Lastly, any aspirant for the coming presidential election, must first win the Party primary and screening, before presenting himself as the party flag bearer, for National election

The war of words between Bello's GYB2PYB and Tinubu's TSG is also ridiculous, as it may likely expose Governor Yahaya Bello to a lot of criticism, especially given the existing views of most Nigerians, concerning his shortcomings, in the handling of the affairs of kogi State.

The Tinubu Support Group (TSG), in a statement credited to its Director General, Comrade Umah Ibrahim, said that Bello's Kogi State is the only state in Nigeria with accumulated arrears of civil servants salary of over six months. People will, after this war of words between Tinubu TSG and Bello GYB2PYB, see Bello's ambition as ill timed and unnecessary, since he can not be seen to have, effectively manage the affairs of his state.

There are others, also, who see Governor Bello's ambition as inordinate and had argued, that he should reflect a bit, on his emergence to power, through the unfortunate incidence of his father's demise and be humbled. While others reasoned, that he should first, manage the affairs of Kogi State efficiently, to prove his worthiness for the higher office of the President of the Federal Republic of Nigeria.

Besides, while youthfulness is yet to be a qualification for the office of the President of Nigeria, records of past achievements is a veritable consideration for that exalted office, and here is where the line, between Governor Yahaya Bello and Asiwaju Ahmed Bola Tinubu, must be drawn.

Asiwaju Ahmed Tinubu was a co-founder of NADECO, an organization founded after the botched victory of MKO Abiola to check the excesses of General Abacha's Tyranny. He was also a former Governor of Lagos State and presently, the National leader of the All Progressive Congress.

His leadership of the ruling APC, is as of right, as the history of the All Progressive Congress APC, can not be started without mentioning the contribution of this astute politician. Infact, it is of common knowledge that, it took the political ingenuity of no less a personality than the Asiwaju to engineer the formation of the APC, which is considered to be the largest coalition of political parties in Africa,

Though, this is but a synopsis of the important place, occupied by Tinubu, in the anals of the All Progressive Congress, his founder position also give him the right of first refusal, in any choice of place, he may desire in the party. Secondly, being the doyen of Southwest politics, Asiwaju Ahmed Tinubu, has the wherewithal, both in human and material resources, to win party primary of the magnitude required, of candidate for presidential election.

Lastly, since the party primary election will decide who becomes the party's flag bearer, let us persuade both the GYB2PYB and the TSG to sheathe their sword until campaign begins. It is then, and only then will we know who has what ambition, and until then, let the youths continue to respect their elders even in politics. That is our tradition.

Content created and supplied by: Caidozenan (via Opera News )