You Can't Tell Me My Party Lost Osun, You Are Not INEC -APC Nat'l Chairman Tells Arise TV Presenters

By Daveadex (self media writer) | 2 months ago 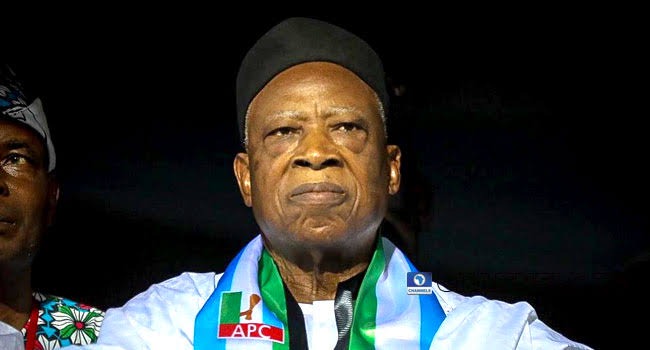 Senator Abdullahi Adamu, national chairman of the All Progressive Congress, is the chieftain who is most likely still unaware of the most recent announcement of the Osun state governorship election. Adamu, the contentious party leader, appeared on the Sunday edition of Arise TV Morning Show to address a variety of concerns regarding the party's and the nation's business.

Following the conclusion of the party's primaries and the selection of Senator Kashim Shettima as the vice presidential candidate, Steve Ayorinde and two other women who served as the program's anchors essentially interrogated the chairman about the state of affairs in Nigeria and how defection is presently rocking the ruling Party.

The first round of questions centered on the devastating defeat that the APC recently endured in Osun State, when Senator Ademola Adeleke of the PDP was pronounced the victor. Out of all the local governments in the State, Adeleke won 17 of them.

Senator Adamu said that he was not yet informed of the election's final results when asked how his party has been managing the loss in Osun state and their next course of action.

He added that as of last night, just before he went to sleep, the results were still being tabulated and compiled. And no one has told him that his party lost the election since he awoke this morning.

He told the program's hosts that they couldn't tell him he lost the election in Osun State as soon as they woke up this morning. Are you one of the INEC officials in charge of the election? Since I have not heard from INEC, I am unable to comment. Informed them, Adamu.

The chairman emphasized that he must wait until he is formally advised on the decision, despite references to newspaper publications and the precise time the announcement was made.

Instead of talking about the issue he was unaware of, he insisted that the interview session be changed to a different subject. Content created and supplied by: Daveadex (via Opera News )