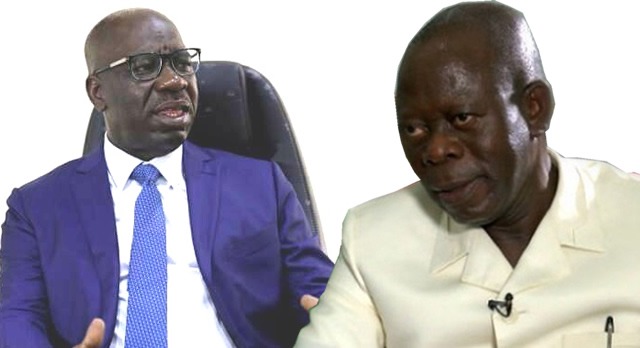 The Special Adviser to the Edo State Governor on Media and Communication Strategy, Mr Crusoe Osagie , has said the ex - national chairman of the All Progressives Congress, Adams Oshiomhole , is disappointed because Governor Godwin Obaseki refused to be used in his quest to become a godfather in the state.

Osagie stated on Monday that the criticism by Oshiomhole was just an expression of his frustration over his failure to achieve his goal to govern Edo State for a third term using Obaseki as a proxy.

2.End to insecurity in your hands, Buratai tells Nigerians Nigerians can end the spate of insecurity in the country by exposing the criminals living within them, the Chief of Army Staff, Lieutenant General Tukur Buratai, said this yesterday.

He said citizens were not helping matters by only complaining about insecurity and accusing security agencies of not doing enough.

Buratai stated that terrorism, banditry, insurgency, kidnapping and other security challenges would end when the citizens wanted them to end.

3.Akpabio to lawmakers: Most NDDC contracts awarded to you The Minister of Niger Delta Affairs, Godswill Akpabio, has alleged that most of the contracts of the Niger Delta Development Commission (NDDC) were awarded to the National Assembly members.

The minister said this to the House of Representatives Committee on NDDC investigating financial mismanagement in the NDDC in Abuja yesterday.

Akpabio debunked the allegations by a former Managing Director of the NDDC, Joi Nunei, that he approved N10bn for her to share to contractors.

On the allegation that NDDC had been awarding contracts without recourse to due process, Akpabio said the agency only awarded three contracts after he assumed office as minister.

Akpabio listed the contracts to include: forensic audit, purchase of 90 vehicles and COVID-19 emergency projects. Chief of Army Staff, Lt. Gen. Tukur Buratai, met yesterday with President Muhammadu Buhari to brief him on efforts by the military to tame the wave of banditry and terrorism, especially in the North.

Buratai, told State House reporters after the meeting that the nation’s security situation was now better than what it was last month when the president gave the military marching orders to tame insecurity. The Independent National Electoral Commission (INEC) has disclosed that only the court could stop the Peoples Democratic Party (PDP) governorship candidate, Mr. Godwin Obaseki, and his running mate, Hon. Philip Shaibu, from contesting the September 19 election in Edo State. Police in Niger State has uncovered a secret torture center in Suleja, Suleja local government area of the state where almajirai are being tortured and punished under the guise of imparting Islamic knowledge onto them.

15 children whose ages are between two and 12 years were kept in a dehumanized condition at the center located at new Angwan Kwamba in Suleja were rescued.