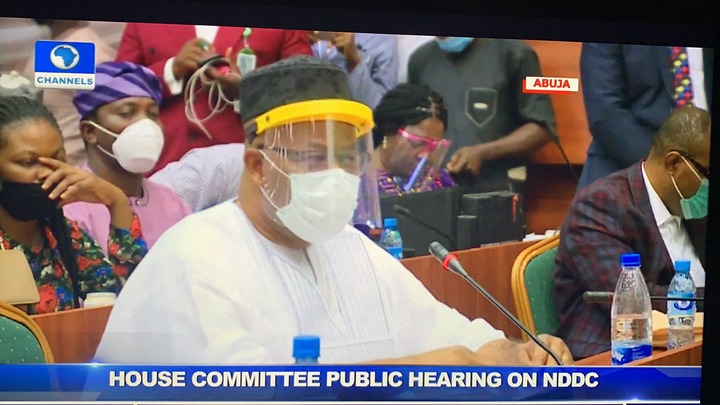 Apparently, the Minister of Niger Delta Affairs, Senator Godswill Akpabio, is trending on various social media platforms after clashing with the House of Reps Committee members probing the NDDC over unaccounted 18 billion naira.

The ugly incident happened when Senator Godswill Akpabio accused some National Assembly members of taking contracts from the NDDC, yet they are probing.

That particular statement angered the House of Reps Committee members and it almost turned into a war of mouth. Akpabio really knocked and provoked the legislators and that made the chairman of the committee to stop him.

He specifically pointed out that the two chairmen of the committee can explain better and the members of the panel kept on shouting "order!! It is okay!!. An innocent woman on the panel got angry, that why will Akpabio accuse members of the house of such a crime.

Akpabio told her that she should forget about it because she doesn't know about it.

(Something like "calm down mama, you don't know what's going on.")

Godswill Akpabio specifically tried to talk about the contract awarded by the NDDC (N10 Billion) to the chairman of the committee, for his LGA of Ore and the members of the committee were not having it.

They're started shouting "order!! Honourable minister, it is okay." From all indications, this is a classic example of two Elephants fighting.

Also from my own perspective, the corruption that is rocking the NDDC is much deeper, involving very prominent politicians and some of them are likely on the panel.

All they have been doing is to look for a fall guy, someone to throw under the bus but Akpabio is refusing to go down alone.