By AkwaOnline (self meida writer) | 21 days 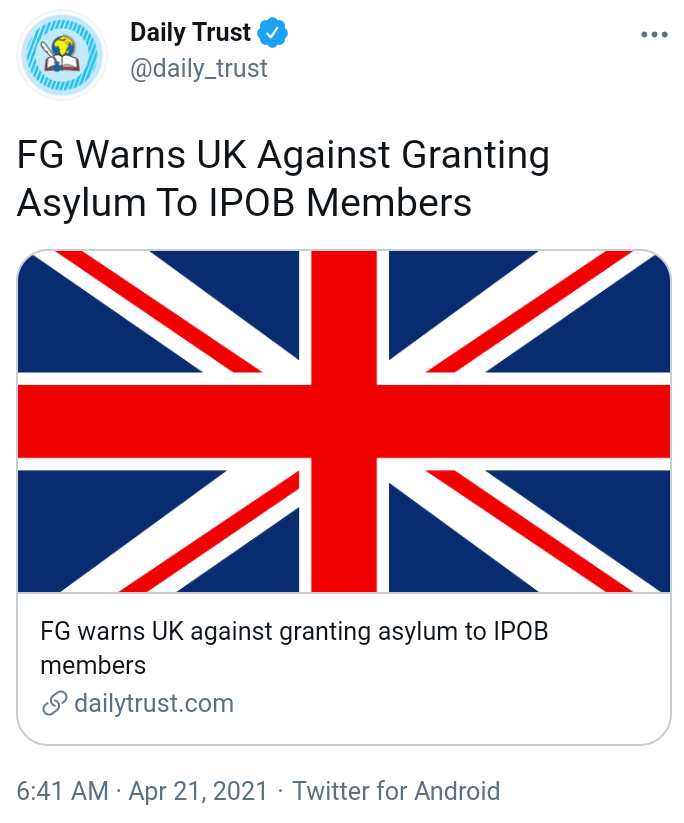 The Federal Government on Tuesday described the reported decision of the United Kingdom to grant asylum to “persecuted” members of the Indigenous People of Biafra (IPOB) as disrespectful of Nigeria as a nation.

The Minister of Information and Culture, Lai Mohammed, while fielding questions at a News Agency of Nigeria flagship interview programme, NANForum, on Tuesday in Abuja, said the decision was unacceptable to Nigeria.

He said the decision was akin to sabotaging the fight against terrorism and generally undermining Nigeria’s security. 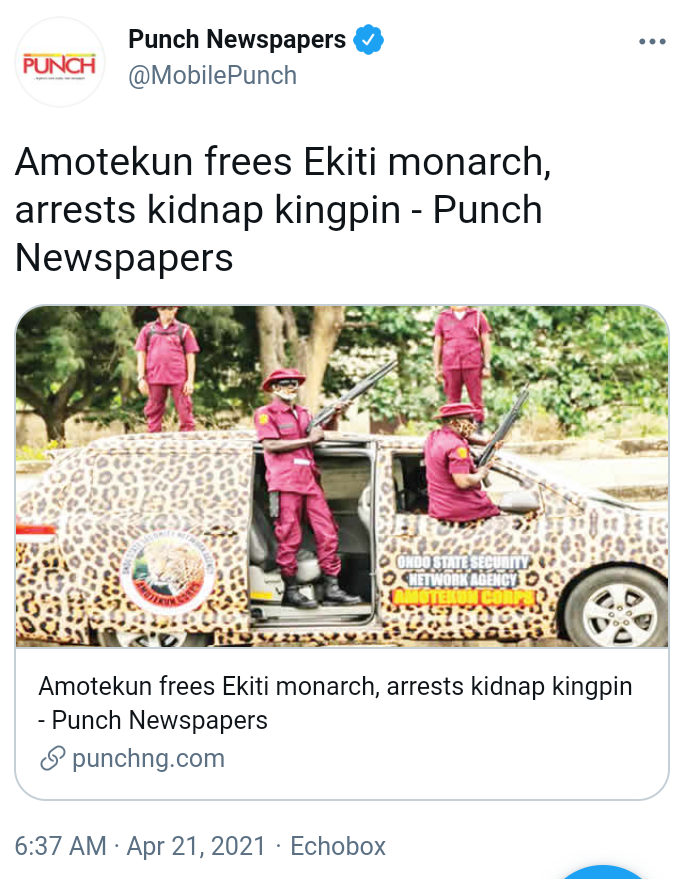 The Obadu of Ilemeso Ekiti in the Oye Local Government area of Ekiti State, Oba David Oyewumi, who was kidnapped in his palace on Thursday, has regained freedom.

A source, who said the monarch had been taken for medical attention, said, “Kabiyesi has been released. We are happy about this, but I do not know whether any ransom was paid or not.”

Recall that the traditional ruler was kidnapped by six gunmen, while a family source on Monday said the abductors demanded N20m ransom.

The Ekiti Amotekun Corps Commander, Brig Gen. Joe Komolafe, said the traditional ruler was rescued at Obbo Ile in Kwara State with the support of the vigilante members in Kwara State and Amotekun operatives.

The Police Public Relations Officer for Ekiti State Police Command, Sunday Abutu, said, “The traditional ruler has been reunited with his family, though he is at present receiving treatment in hospital because of the trauma”.

CAN Speaks On Nigeria Breaking Up. 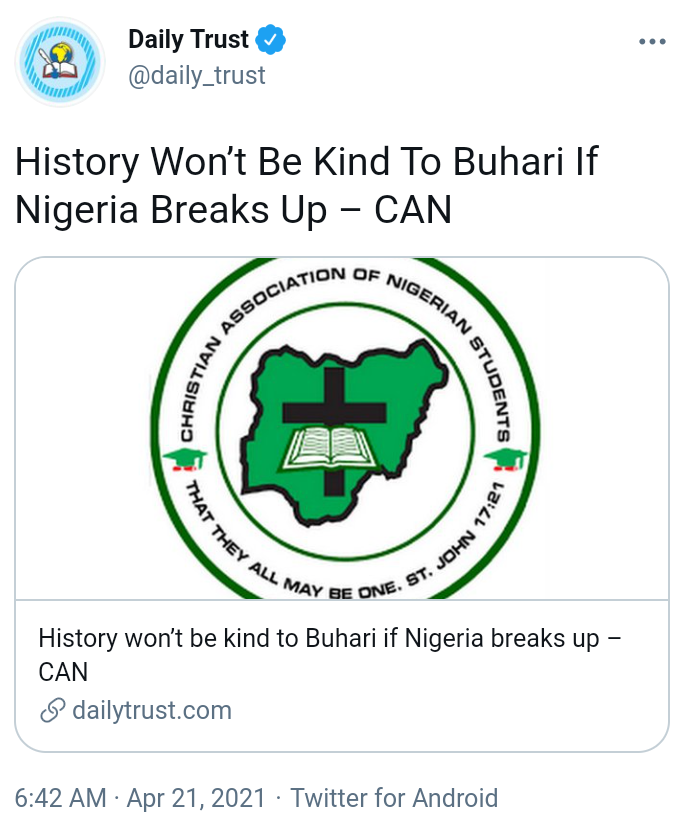 The Christian Association of Nigeria (CAN) says history will not be kind to President Muhammadu Buhari if Nigeria breaks up before the end of his tenure.

CAN Vice Chairman (North), Rev. John Hayab, said this on Tuesday while reacting to the claim by the Presidency that secessionist groups could not intimidate Buhari.

Hayab, who described the claim by a presidential spokesman, Garba Shehu, as a display of fake arrogance, urged Buhari to tackle the factors responsible for the agitations for Nigeria’s break up as things were not working well in the country.

Strike To Continue As JUSUN, PASAN Stage Walk Out At Parley With Ngige 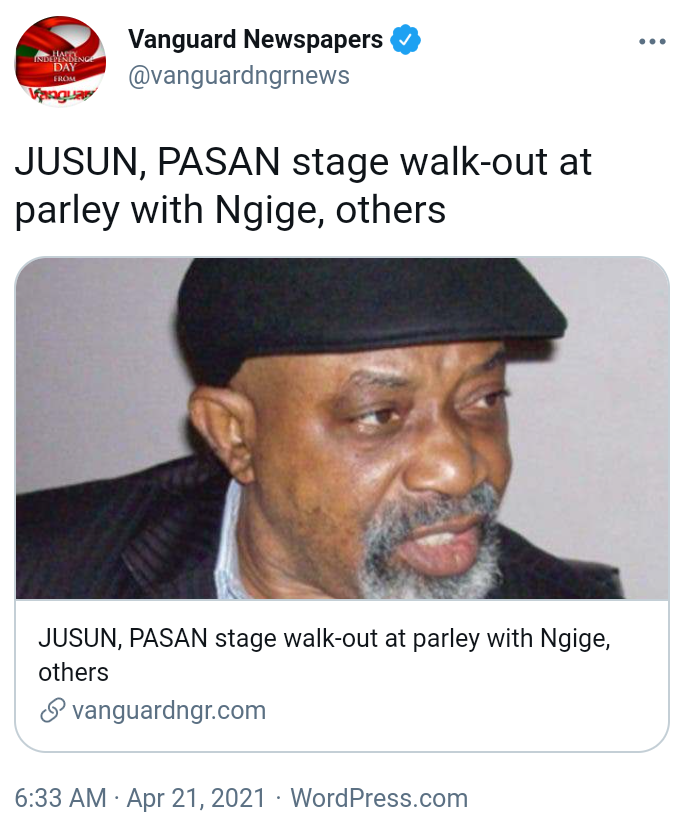 THE striking members of Judiciary Staff Union of Nigeria, JUSUN, and Parliamentary Staff Association of Nigeria, PASAN, yesterday staged a walk-out at the meeting convened by the Minister of Labour and Employment, Senator Chris Ngige over the ongoing industrial action by the unions.

The meeting was scheduled for 3pm at the Conference Hall of the Minister’s office, Abuja, but the two unions after waiting for about two hours without being attended to stormed out of the venue.

But the Minister has explained that the meeting with JUSUN and PASAN was postponed to enable the Federal Government negotiating team harmonize all issues from the Memorandum of Understanding reached at separate meetings with tiers and arms of government.

Ngige in a statement issued by the Deputy Director, Press and Public Relations in the ministry, Charles Akpan said the postponement was necessary to ensure that the meeting with the unions come with a Memorandum of Action which is implementable with time lines. 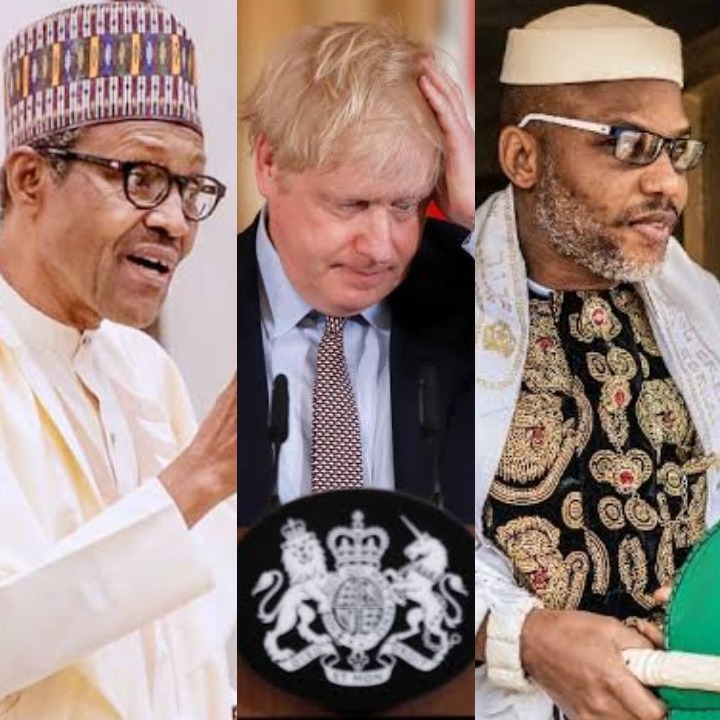