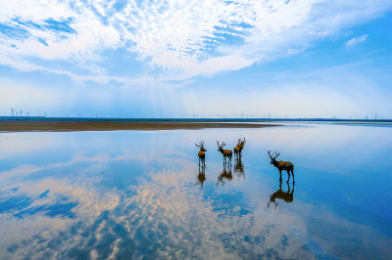 Paying close attention to preventing and treating desertification, the “cancer of the Earth”, China has made continuous efforts to resolve the issue by improving relevant laws, exploring technological means and launching greening projects, and reaped ecological, economic, and social benefits while contributing wisdom to tackling desertification around the world.

The Kubuqi Desert in the northern Ordos, north China’s Inner Mongolia autonomous region, is China’s seventh largest desert. About 30 years ago, Kubuqi Desert was a “desert sea of death” for even birds.

Nowadays, however, nearly one-third of the desert has become greener, with steadily restoring biodiversity and noticeably improving ecology. Sand and dust weather in the region has decreased by 95 percent compared with that 20 years ago.

“I was impressed by the changes I saw in the Kubuqi Desert, and China’s successful experience in treating the desert is worth learning from,” said Dr. Bazardorj, researcher at the Institute of International Affairs, Mongolian Academy of Sciences.

After conducting investigations in China’s Inner Mongolia autonomous region and the provinces of Hebei and Zhejiang in June 2019, Dr. Bazardorj wrote an article to introduce China’s experience in combating desertification at its Kubuqi, Maowusu, and Hunshandake deserts to Mongolia people. 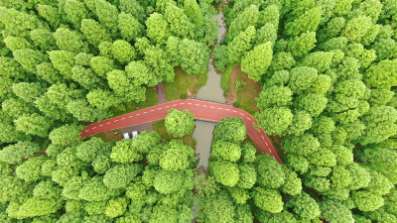 “China’s desertification control, an incredible grand program, shows the country’s years of efforts based on scientific research. More importantly, it represents the right decisions of the country and the result of good coordination among and joint efforts of governments, enterprises, and individuals.” Dr. Bazardorj said.

China, a country with a large area of deserts and a considerable number of people affected by desertification and heavy sandstorms, is also seeing pleasant changes in many other deserts in the country. As remote-sensing images show, the once green dots scattered in yellow sand in northern China are growing into green areas.

Asia registered the highest net gain of forest area from 2010 to 2020, and China recorded the highest average annual net gain in forest area during the period, according to Global Forest Resources Assessment 2020 released by the Food and Agriculture Organization (FAO) of the U.N. in 2020.

China places great emphasis on protecting forest resources, said an official with the FAO, adding that China has a forest area of 220 million hectares, accounting for 5 percent of the world’s total.

Over decades, China has carried out key ecological projects covering such tasks as returning farmland to forests and grasslands, construction of shelter forests in northeastern, northwestern, and northern China(the Three-North Shelter Forest Program), the control of the sources of sandstorms in the municipalities of Beijing and Tianjin, as well as the comprehensive containment of stony desertification, and set in motion the construction of closed-off protection zones of sandy land and national desert parks.

The country has signed the United Nations Convention to Combat Desertification (UNCCD) and enacted and implemented a law on prevention and control of desertification, building a green barrier in the legal system.

Meanwhile, a multitude of leading enterprises, exemplary individuals in desertification control, and the general public have actively contributed to the battle against desertification, greening more sandy land. 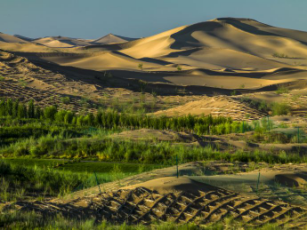 China has become the first country to achieve zero increase in land degradation and witnessed a decrease in the areas of desertification and sandy land, contributing greatly to the realization of the goal of zero growth in land degradation set out in the UN 2030 Agenda for Sustainable Development, according to UN Secretary-General Antonio Guterres.

Statistics show that more than two billion people from 167 countries and regions are threatened by desertification.

As countries and regions along the Belt and Road have deepened exchanges and cooperation in desertification prevention and control in recent years, China’s advanced technologies and models for treating desertification have been more widely promoted.

In December 2019, the world’s first International Knowledge Management Center on Combating Desertification, jointly established by China and the UNCCD Secretariat, was inaugurated in northwest China’s Ningxia Hui autonomous region. Its first training session on desertification control closely followed the inauguration was attended by 21 representatives from 15 countries. 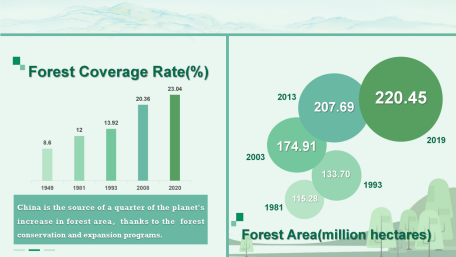 Desertification control, an issue concerning survival and development, is aimed at helping people affected by desertification and sandy land live a better life.

The deserts and areas stricken by stony desertification in China are inhabited by nearly two-thirds of China’s poor counties and 80 percent of the country’s poverty-stricken population. They are not only key areas for ecological construction, but also main battlefields in the country’s fight against poverty.

By establishing an innovative desertification control mechanism that combines policy support from the government, investments from enterprises, market-driven participation of farmers and herdsmen as well as continuous technological innovations, China has embarked upon a road of sustainable development that brings yields to enterprises and income to farmers while improving ecological environment.

The treatment of Kubuqi Desert has integrated poverty alleviation with environmental protection, which provides a good example for Southeast Asian countries, said a member of the Parliament of Cambodia, who hopes to introduce China’s idea of getting rid of poverty while improving the environment to Cambodia and put it into practice based on local realities.

China has shown that improving the ecological environment can not only increase the grain yields of the land, but help people shake off poverty and become better-off, the Cambodian politician added.