By SOLOgaxy (self meida writer) | 24 days 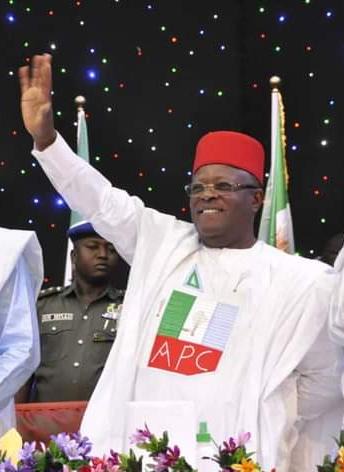 For clarity, in the wake of the catastrophe that engulfed Ebonyi State and indeed the entire Southeast geopolitical zone irrespective of the political party in power in the affected Southeast states of Anambra(APGA), Abia(PDP), Ebonyi(APC), Enugu(PDP) and Imo(APC), instead of the opposition PDP in Ebonyi State to see the ugly scenario as a collective carnage against the Igbo nation and race, its members in Ebonyi State rolled out the drums in their hotels and celebrated terrorism and the murder of innocent Ebonyians and the arson that followed which are the heights of criminality in law thereby giving every other person the impression of being accomplices even against states where their own political party is in power, but particularly in Ebonyi State which is their own State. This is really unfortunate.

What can a political party whose members are totally bereft of ideas on solutions to State and national issues particularly as it concerns security, offer the good people of Ebonyi State? Practically nothing.

The opposition PDP in Ebonyi State should know it that playing the blame game instead of seeing oneself as partners in the progress of Ebonyi State is not an achievement. It is rather a woeful failure. If the PDP couldn't profer workable panacea to terrorism and criminality in our political hemisphere, how can it convince the people of its capability and capacity to provide democracy dividends if it is able to clinch power? Indeed, the PDP in Ebonyi State is a huge failure and the failure is a litany of woes.

In advance democracies like USA, UK and others whom we copied our constitutional government, the opposition does not rejoice when their countries or states are in turmoil particularly where their national interest is threatened; rather they join hands with the government in power to save their nations from crises and annihilation. This is called patriotism and this is unlike Ebonyi State nay, Nigeria where opposition elements of the PDP perceive national cataclysm as the affairs of the ruling APC; this is why whenever a bad news breaks on the airwaves, PDP members in Ebonyi State will start clicking glasses in celebration. That's the peak of irresponsibility.

The other day, the illegitimate and imposed National Vice Chairman of the PDP, Southeast Zone, Ali Odefa, drove in an open roof vehicle with his convoy of clowns, round Abakaliki capital city, celebrating the crisis in Effium and other Communities in Ebonyi State. Besides the jeering which they received along the roads, that show of shame was the worse display of touting and idiocy in our 21st Century history particularly as some of the youths in the same vehicle with Odefa hung up on the vehicle doors like "area boys" in flagrant disregard for traffic rules. Be that as it may, that foolishness proves that shit deodorized remains shit and a monkey taken to England remains a monkey. Odefa can never check off his touting propensity. Like a leopard, Odefa can never wash off his ugly spots. These are the type of people who want Ebonyians to believe that they have something meaningful to offer the State. Arrant nonsense!

We applaud His Excellency, the Governor of Ebonyi State and the Chairman of Southeast Governors' Forum and indeed the governors of the other four Southeast states for taking the bull by the horn and for courageously launching the laudable "EBUBEAGU" security outfits for the Southeast Zone as a response to the "Save Our Souls" clarion by the Igbo nation. This is leadership prowess. It is also patriotism and it is in tandem with the priority of every responsible government which is the protection of lives of its citizens and property.

Recall that in 1923, Sir Herbert Macaulay, the father of Nigerian modern nationalism introduced the axiom: "Safety of the people is the greatest law". This axiom was later to become the motto and slogan of the first political party formed in Nigeria by this foremost nationalist and patriot; the Nigeria National Democratic Party, NNDP which was timely, following the introduction of the elective principle for the first time in Nigeria by the British colonial government under Hugh Clifford Constitution of 1922. The Macaulian NNDP slogan was later translated to Latin as "Salus Populi Est Suprema Lex". The records are still there.

The PDP in Ebonyi State should imbibe the logic of cross-fertilization and cross-pollination of ideas as the alchemy for unity and love, peace and progress of our dear state and our nation. This is because ideas develop a nation and move the world; not the poverty of commonsense which the PDP is showcasing here and there in the most dismal fashion.

Governor Umahi is the answer.

Content created and supplied by: SOLOgaxy (via Opera News )