General Sani Abacha was a Nigerian statesman and 10th Head of state of Nigeria who ruled Nigeria for about 5 years (1993 - 1998). He was preceded by the interim government of Ernest Shonekan. In November 1993, Abacha forcefully made himself Head of state by forcing Ernest Shonekan to resign as Interim Head of Government. Abacha in his commando style jailed M.K.O Abiola for treason accusing Abiola of declaring self as President. General Sani Abacha made a decree in 1994 giving himself express powers to jail anyone up to 3 months without trial. Under Abacha human rights was grossly violated and cracking down on oppositions and everyone who had contrary views to the government of Abacha. 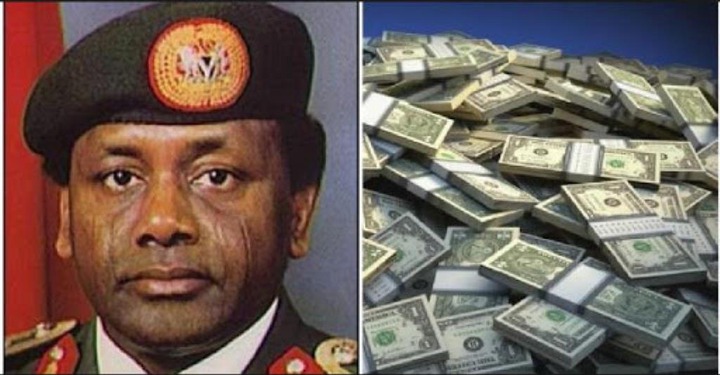 Nigeria had a very good economic boom under Abacha but unfortunately , these monies were plundered recklessly by Abacha. With the help of Abacha's National security adviser - Ismaila Gwarzo, about 1.4 billion dollars was laundered abroad. According to the Transparency International, Abacha stole about 5 billion dollars during his reign as Nigerian Head of State. Some of these loots were stacked in Banks in Switzerland, France, UK and the US. Successive governments after the death of Abacha have been trying all possible best to recover some of these monies abroad. From General Abdusalam Abaubakar, President Olusegun Obasanjo, President Umar Musa Yar'Adua, President Goodluck Jonathan to President Muhammadu Buhari have tried to get these money back into Nigeria.General Abdusalam Abubakar recovered US$ 750 million. The then Chief press secretary of Abdusalam Abubakar, Muhammed Haruna said 625.3 million dollars and another 75.3 million pounds was being recovered. That was as at 6th November 1998. According to Mr Haruna about $2.5 billion was taken out of the Nigerian treasury. General Sani Abacha agreed to pay off TPE, a Russian firm for the Ajaokuta plant, when in fact they did not complete the project of building the plant - Ajaokuta steel which would have been the largest steel manufacturing company in Africa. Some members of Abacha's family and some persons bought the company for 500 million dollars and collected the 2.5 billion dollars from the government. Think of what could have been the impact of the completion of the Ajaokuta steel company assuming we had the right kind of leadership that ensured the company was fully made functional by TPE. We could have had most of our engine parts manufactured locally thereby strengthening our economy. Nigeria today export lots of products made from steel from China. Look at what the greed and self centeredness of a leader has cost the future of a country.

The recovery of Abacha's loot is like a season film with many episodes. The Nigerian government under President Olusegun Obasanjo also recovered $500 million from Switzerland. The Switzerland Federal Office of Justice (FOJ) ascertained that about 500 million dollars of frozen funds were clearly proceeds of crime and as such cannot belong to the Abacha's family and consequently handed it over to the Nigerian Government. President Olusegun Obasanjo and the then Minister of finance Okonjo Iweala promised the swiss government that the money will be judiciously spent on developmental projects in the healthcare, educational sectors as well as infrastructural projects. Later another 458 million dollars was also recovered by same government from Switzerland. During Obasanjo's tenure, the Federal government struck a deal with Abacha survivors and recovered US$1.2 billion. The Abacha family was able to get about US$100 million and par bonds worth US$300 million in a quid quo pro arrangement with the federal government. The unfortunate incident here is that the Federal government had to settle with a deal that is so unpleasant. It is easy to know that the Abacha family could not have worked to earn as much as US$100 million. We were again cornered by the singular mistake of a brutal warlord whose brutality and corruption is unrivalled in the history of Nigerian leadership. During the the tenure of President Goodluck Jonathan, he also recovered US$1 billion , US$227 million and US$48 million , US$380 million in 2012, 2014 and 2015 respectively. President Muhammad Buhari has also recovered US$322 million in 2017 from Switzerland. and US$308 million recently.

It really seems a blessing for Nigeria that we have an everlasting ancestral donor who seems to bless Nigeria with his saved loots from time to time. The blessing seems a good one and a reason to smile to successive Nigerian government who from time to time access their "ancestral account". How long will this blessing last?, no one knows. The big question is over the years, how has the Abacha loot been spent? There have been allegations from several quarters that over the years, a significant chunk of the Abacha loot has been re-looted by Nigerian government officials. Professor Ayodele Atsenuwa, professor of law at the University of Lagos, speaking at a conference in Abuja organised by the Kent Law school and MacArthur foundation has opined that most of the funds stolen under the administration of President Good luck Jonathan were majorly funds recovered from Abacha's loot. This might not be difficult to believe owing to the level of corruption amidst Nigeria political elite. A former governor of Plateau state, Joshua Dariye has once alleged that a sum of money recovered from him was different from what was declared. The story of "re-looting" looted funds is not uncommon in Nigeria and has been the brain behind scepticisms about the recently recovered funds by President Muhammad Buhari. Femi Adesina, Special Adviser, Media and Publicity to President Muhammadu Buhari tried to clear the air on these scepticisms by ascertaining the Buhari Administration will use the recently recovered funds for some special projects which includes the Mambilla Plateau Project, The 2nd Niger bridge, The Lagos -Ibadan rail road and some other capital projects. He also said previously recovered funds was used for social investment programme- the school feeding programme, GEEP - Enterprise and empowerment programme for micro small and medium businesses. These will be quite impressive if the government will be able to actualise these dreams especially when they have signed an agreement with the government of Jersey and United States (who wants a commitment from the Nigeria government the funds will be appropriately utilized) as regards the last trunch of recovered funds.

As a Nigerian, Abacha looted funds comes with mixed feelings, to be classified as a curse and blessing. Its a reminder of the dark days Nigeria have been through in the hands of a ferocious leader who plunder national wealth for personal gains thereby subjecting citizens to economic harshness, abject poverty and clogging the wheel of national growth and development. It also underscores the debilitating effect Nigeria and Nigerians had suffered and still suffering from the fangs of corruption. It also gives a soothing relief as it helps as a bail out each time its been received by the government of Nigeria for the development of the society. Nigerians are waiting to see what benefit they stand to derive from this recently recovered loot.

Lastly, we are talking about Abacha's loot today, whose loot will we talk about in the future.