Why APC Will Lose Ondo State To PDP If Gov Akeredolu Is Given The Party's Ticket!

Going by the recent happenings in the Ondo State All Progressives Congress, APC which had seen many party members defecting to the opposition Peoples Democratic Party, PDP some fortnight ago, were the Secretary to the State Governor, SSG decamped to the PDP necessitating the move of the deputy governor of Ondo State, Chief Agboola Ajayi and 34 other APC stalwarts to join the PDP amid stiff opposition from Governor Oluwarotimi Akeredolu. 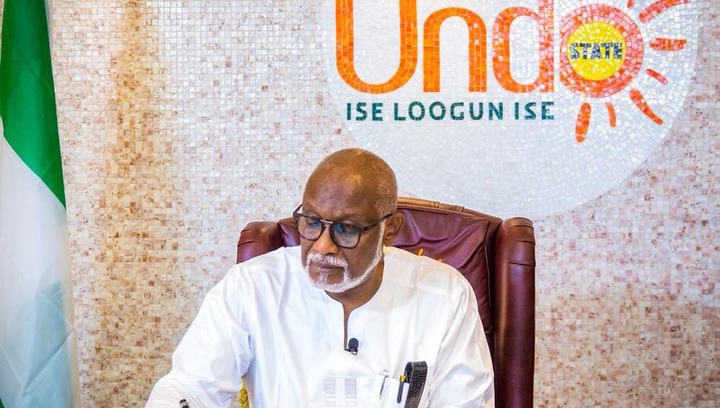 The Crux leading to the detection of many staunch members from the All Progressives Congress, APC to the Peoples Democratic Party, PDP was borne out of the one man show Governor Oluwarotimi Akeredolu has been running the government of Ondo State, as if he his the only one that was elected to govern the people. Many party faithfuls have been decrying the ways and manners the governor have been operating in the State without carrying anybody along and because of his brazenly attitude, alot of disaffection had crept into the party, causing divisive camps.

Just yesterday, the Mai Mala Buni led APC Caretaker/Extra-Ordinary National Convention Planning Committee, had given his nod for an indirect primary election for the party in Ondo State against the objection of eleven of the twelve aspirants screened for the APC primary scheduled to hold on the 20th of July, 2020. The 11 aspirants are objecting to the indirect primary because according to them, the decision of the APC National Convention Planning Committee for an indirect primary was made to favour Governor Oluwarotimi Akeredolu because as an incubent governor of Ondo State, he can afford to pay his way to clinch the party ticket owing to the fact that, all the 203 councillors in the State are under his wings. The aggrieved aspirants are also threatening to have a concensus candidate, in the event that their appeal to the Buni led Caretaker/National Convention Planning Committee fell on deaf ears. While they are calling on the APC Nationals to reconsider their decision to conduct an indirect primary election for the party in the State, many other party faithfuls are planning on decamping to the opposition Peoples Democratic Party, PDP if Governor Oluwarotimi Akeredolu emerged as the party flagbearer for the October 10, 2020 governorship election in the State.

But it seems events in Edo State had been the reason why the APC Nationals are hinging on an indirect primary election, following the disqualification of Governor Godwin Obaseki from contesting the APC primary election in Edo State that made him to dump the All Progressives Congress, APC for the Peoples Democratic Party, PDP with large mass of APC stalwarts and members. Thus, the fear of the APC Nationals is not let Governor Oluwarotimi Akeredolu toe similar path which Governor Godwin Obaseki toed based on the internal party crisis that rocked the party in the State that led to his defection to the PDP.

But, the deputy governor of Ondo State, Chief Agboola Ajayi who recently decamped from the APC to the PDP with about 34 staunch APC members, and his eventual decision to pick his nomination form to contest the PDP primary election, has thrown the APC into a quagmire because from all indications, Agboola Ajayi is poised to takeover from Governor Oluwarotimi Akeredolu based on the overwhelming support he is getting from a large section of the populace of Ondo State. Hence, it is becoming a glaring reality that if APC in Ondo State gives Governor Oluwarotimi Akeredolu the party ticket to contest for the governorship election against the wishes of most APC stalwarts in the State, APC runs the risk of losing the State to the opposition Peoples Democratic Party, PDP, or worst, APC might not be able to present a candidate for the Guber if things goes daisy, as the other 11 aspirants are agitating to involve legal actions if the APC Nationals refuse to reconsider their decision to conduct an indirect primary election for the party in the State.

Thus, it behoves on the APC Nationals to heed the counsel of the 11 APC governorship aspirants who are clamouring for an direct primary election against the desire of Governor Oluwarotimi Akeredolu who wants a direct primary election, because from the statistics, 11 aspirants against one is a pointer that most party members are in total disagreement with Governor Oluwarotimi Akeredolu, and as such if APC Nationals refused to heed to their call and continue with the indirect primary election, which is geared to favour Governor Oluwarotimi Akeredolu, it will be a huge catastrophe for the APC because the party would witness mass defection to the opposition Peoples Democratic Party, PDP which will in turn led to the failure of the APC at the October 10, 2020 governorship election to the PDP as was the case with Oyo State.