By FrankWrites (self media writer) | 1 year ago

It's important to know that the defection of Senator Florence Ita-Giwa is coming after Governor Ben Ayade joined APC. 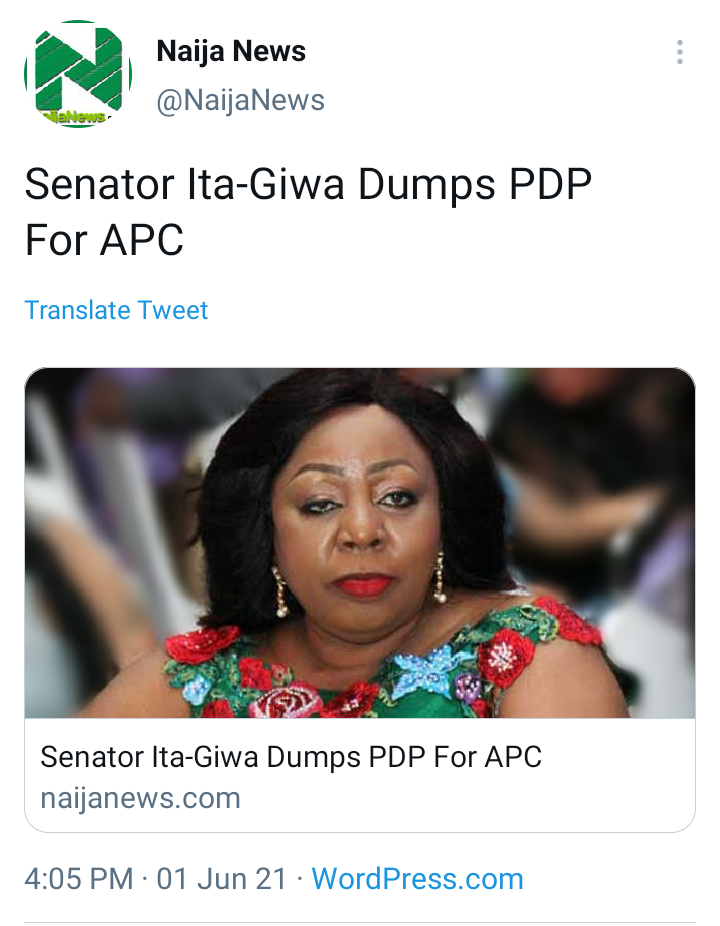 It would be recalled that in 2017, Ita- Giwa defected from PDP to APC, before returning back to the party after a year.

In a statement released on Tuesday, Ita-Giwa said she rejoined APC to support the vision of governor Ayade to lift the people of Cross River and state out of perennial poverty.

The Senator said she would not hesitate to do all she can to promote the state and its industrial revolution which was why she accepted to be the "Cross River" State Ambassador For Industrial Projects.

Governor Godwin Obaseki of Edo State has dismissed the congratulatory message from the former chairman of APC, Adams Oshiomhole and Pastor Ize-Iyamu (the party candidate of the September 2020 governorship election in Edo), 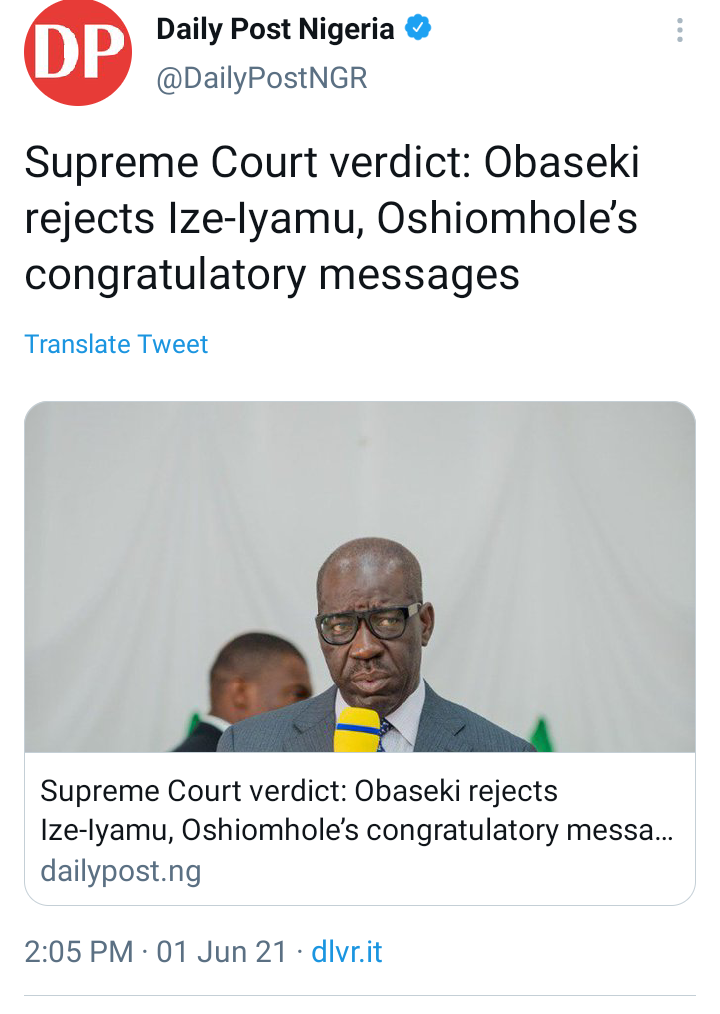 While addressing a large gathering in Benin City as part of the celebration to mark Friday’s Supreme Court victory he said that if the opposition party leaders were serious about their congratulatory letter, they would have printed it on a letterhead paper with signature rather than posting it on the internet.

According to him, Edo will never fall for such cheap messages called congratulatory letters. 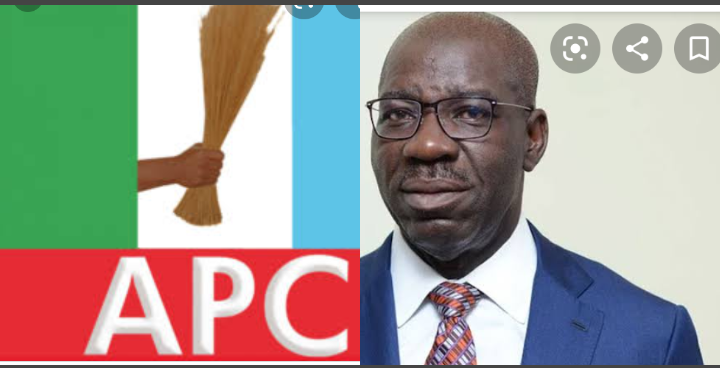 It's Important to know that Obaseki defeated APC during the last governorship election in Edo state.

Bandits Kill Policeman And 6 Other People In Katsina State.

Recently, a gun duel between bandits and mobile police officers attached to Zandam, a community in Jibia Local Government Area of Katsina State had led to the death of six people within the area.

Gambo Isah (The spokesman for the Katsina police command) while confirming the incident to newsmen in a statement released on Tuesday said that those killed include three residents of the village and three bandits. 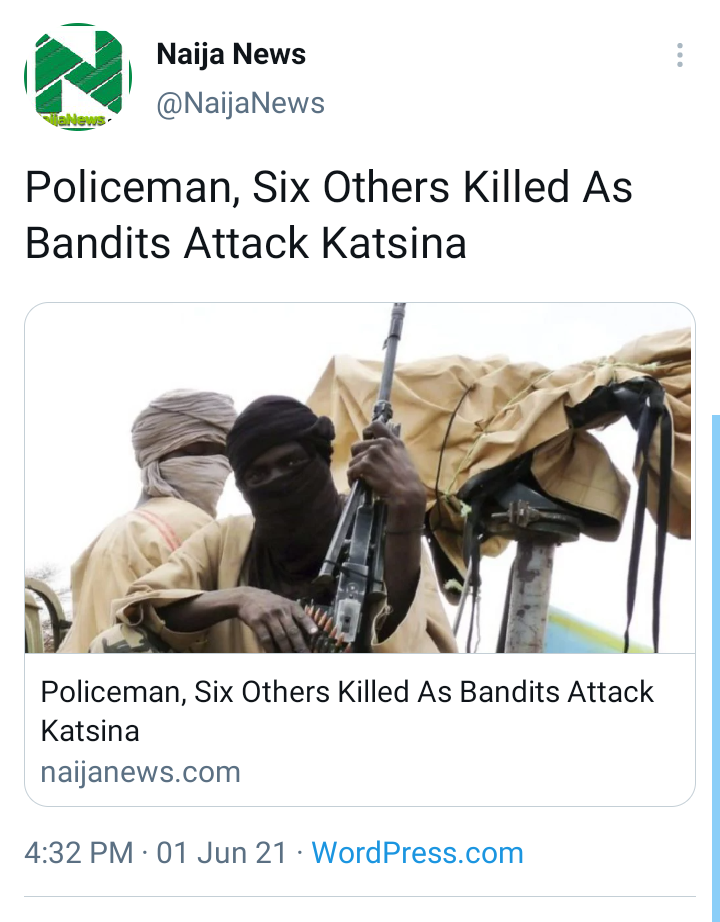 Naija News learnt that the assailants in their large numbers attacked the village at about 5pm on Monday and killed three residents. Five residents were said to have sustained degrees of injuries while the bandits also burnt down an uncompleted building being used as a clinic in the village.

However, Isah further explained that the fierce encounter led to the death of a police inspector serving in the community.

Lai Mohammed (Information Minister) has stated that insecurity in Nigeria will not define the legacy of President Buhari. 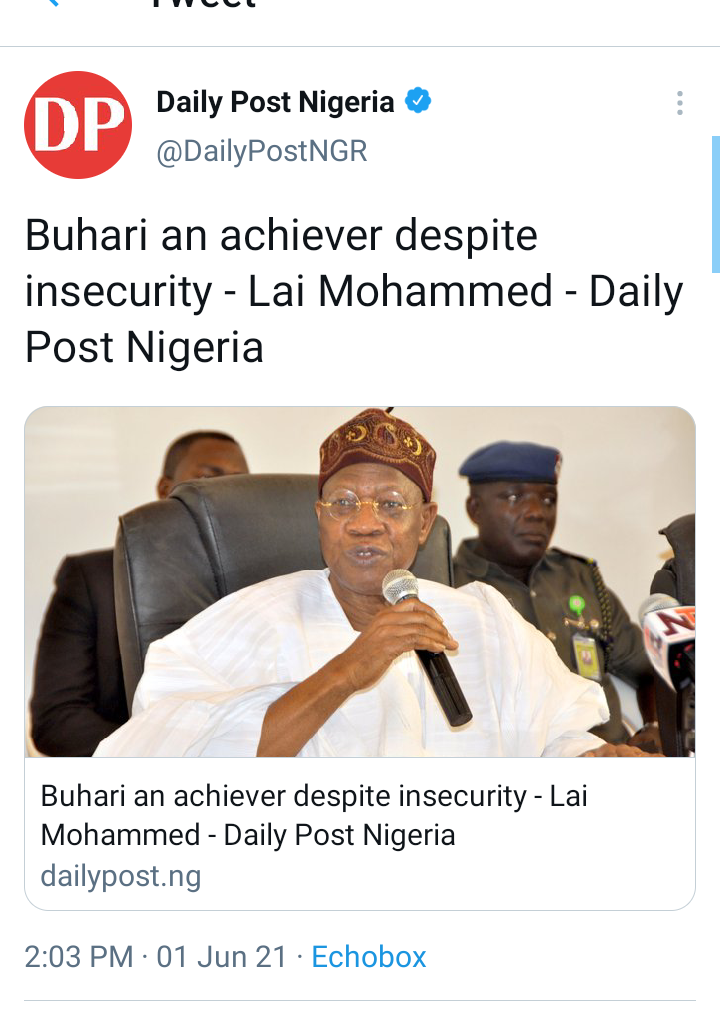 It's important to know that Lai Mohammed made the comment on Tuesday at a press conference on the mid-term anniversary of Buhari’s second tenure.

Mohammed said that though more attention has been given to insecurity, the challenge will not overshadow the successes of the Nigerian leader.