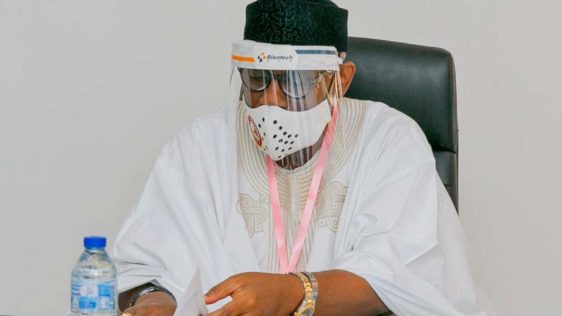 PDP warns APC over allegation of destruction of billboards The Peoples Democratic Party (PDP), Edo State chapter, has warned leaders and members of the All Progressives Congress (APC) against accusing its members of destroying the campaign billboards and posters of Pastor Osagie Ize-Iyamu.

Edo PDP, on Sunday at a news conference in Benin by its Publicity Secretary, Chris Nehikhare, told APC members to look inward over the destruction of the campaign billboards and posters.

It said: “PDP or Edo State Government has no hand in the destruction of billboards and posters of APC and its governorship candidate. We condemn the act.

Obaseki didn’t give us N15b to get ticket, says PDP

Speaking in Port Harcourt, Rivers State, at the weekend, the Edo PDP Campaign Council said there was no truth in Ize-Iyamu’s allegation.

The leader of the Publicity Committee of the council, High Chief Raymond Dokpesi, accompanied by other members of the committee like Senator Dino Melaye, wondered where the governor would have drawn such amount of money to give to the party.

Katsina state chapter of the All progressives congress, APC, has debunked allegations of internal crisis within the party structures and members.

Governor Aminu Masari who is the leader of the party in the state, made this known during a meeting held at the people’s square, katsina.

The meeting was attended by all the 361 ward executives and the state executives of the APC.

The Governor while addressing the party members at the meeting said that, the forum was convened to brief them on the recent dissolution of the National Working Committee,NWC, of the party done by President Muhammad Buhari.

Why does the People’s Democratic Party (PDP), Nigeria’s leading opposition party, celebrate the odyssey of Ibrahim Magu, with so much gusto?

Why does the party rejoice, like denizens of the red lights district, who wildly glory at the rumour (obviously false) that their zone has been decreed off-limits to the Police?

Does the party have an especial interest in sleaze as economic growth area? Or it’s just playing politics, for the sake of politics, even with such an existential threat to national life?

A former national chairman of the All Progressives Congress (APC), Comrade Adams Oshiomhole, has said he has returned to Edo State to join the people to reclaim the state APC.

He declared that if Edo people said yes and God also said yes, no man born of a woman could say no.

Oshiomhole, an ex-governor of the state, spoke at the weekend in his home at Iyamho, near Auchi in Etsako West Local Government while addressing his supporters, who welcomed him from Abuja.

The enthusiastic crowd waited for Oshiomhole for many hours at the main gate of Auchi Polytechnic, before later moving to Iyamho, for the special address by the ex-national chairman of the APC.

Oshiomhole said: “I am back and ready for the job. The snake that entered our family home, God has driven the snake to where he belongs. I have come home to join you and start the process of reclaiming the house to the family of APC.