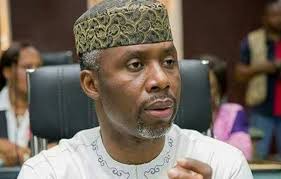 The fireworks in the Imo State chapter of the All Progressive Congress, APC has continued unabated.There has been a war of attrition in the party for sometime as two factions jostle for the soul of the APC in Imo State.

One of the factions led by Marcellinus Nlemigbo is loyal to Governor Hope Uzodinma, while the Dan Nwafor faction owes its allegiance to former Governor Rochas Okorocha and his son in law, Uche Nwosu.

Speaking to newsmen at the APC headquarters in Owerri, Chairman of State Caretaker Committee, Marcellinus Nlemigbo, declared that the 2019 governorship candidate of the Action Alliance, AA, Uche Nwosu and factional Chairman of the party, Dan Nwafor, are not members of the All Progressive Congress, APC in Imo State.

Nlemigbo said Federal High Court, Abuja, has granted an injunction restraining Daniel Nwafor and others from parading themselves as leaders of the APC in Imo State.

According to him, the court re validated him(Nlemigbo) as State Chairman of the party.

Nlemigbo stated that he has always been preferred as the correct APC Chairman in the State, hence he hosted the South East APC leadership with Governor Hope Uzodinma who gathered in Owerri recently. He affirmed that Governor Hope Uzodinma remains the only leader of APC in Imo State, enjoining the party and Imo people to always disregard the Agburu faction of APC led by Nwafor Daniel, stating that Nwafor, Uche Nwosu, others are not APC members, but AA card carrying members, who worked against APC in the 2019 guber election.

Nlemigbo wondered how Nwafor Daniel and others claim leadership of APC in Imo State when they are AA members who left the party after Uche Nwosu lost the APC Primary Election to Governor Hope Uzodinma, prompting them to leave APC for AA.

According to Nlemigbo, "it is unbelievable for those who left APC, fought it and committed anti- party offences will now claim to be its executive even when they have not formerly rejoined the party as members.

"The Federal High Court Abuja has granted an injunction restraining Nwafor Daniel and others from parading as Imo State exco of APC. The NEC and all authorities of the party recognized Nlemigbo as State Chairman and he attends all NEC Meetings at Abuja. Only last week he hosted the South East leadership of APC with Governor Hope Uzodinma.

"The NEC directed all members to discontinue all pending intra- party litigation or face expulsion if not obeyed and we have the letters so authorizing us", he said

Nlemigbo however said his leadership is committed to build a stronger APC in the State and South East in general, while also extending an olive branch to the Agburu faction if they turn a new leaf

In his remarks, the Commissioner for Justice and Attorney General, Imo State Government, Mr C.C Akolisa, said Nwafor Daniel and others should bury their face in shame for claiming what they are not, regretting that Nwafor told the public in 2019 that Imo State APC does not have any guber candidate in the election, asking the Aguru faction of APC to honorably resign from the party.