By OluwafemiSossa (self media writer) | 2 years ago

A Nigerian civil society group, Friends of Democracy and Freedom (FDF) has reacted to the comment of Bob Menendez, a senator of the United States of America, over the controversial rearrest of Yele Sowore by the Department of State Services, DSS within the confines of a High Court in Abuja.

The group, in a statement signed by its president, Joshua Adegbenro said it has become painfully obvious that foreign entities are suing Sowore's controversial stand as a way to divide Nigeria.

Adegbenro, in his statement, bemoaned the US senator's support for Sowore, stating that the crux of the matter was to determine if Sowore broke the law or not- and if he should be punished for it.

Furthermore, he highlighted that attempting to overthrow a democratically elected government through a revolution is a threat to peace and tranquility that all peace loving people must condemn.

Adegbenro, in his statement, accused Sowore of attempting to burn Nigeria down with his cry for a revolution while stressing that foreign figures like Senator Menendez should mind the business of their country and leave Nigeria alone. Read his full statement below

It is indeed a sad commentary in Nigeria with the way and manner germane issues have been replaced with trivialities. This is concerning the ongoing trial of Omoyele Sowore, who, by all intent and purposes, attempted to carry out a violent change of government in Nigeria by calling for a violent revolution.

The Friends of Democracy and Freedom views with suspicion the way and manner some foreign interests have indicated interest in the trial of Omoyele Sowore and in some instances attempting to influence public opinion by crying wolf where none exists.

This is unacceptable and an indication that there is more than meets the eyes in the attempt by Omoyele Sowore to instigate the people against the government to effect a violent change of government. The Friends of Democracy and Freedom believes that the same foreign bodies that have shown tremendous interest in the ongoing trial of Omoyele Sowore should have as well demonstrated the same energy in condemning his attempt to burn down Nigeria and effect a violent change of government. 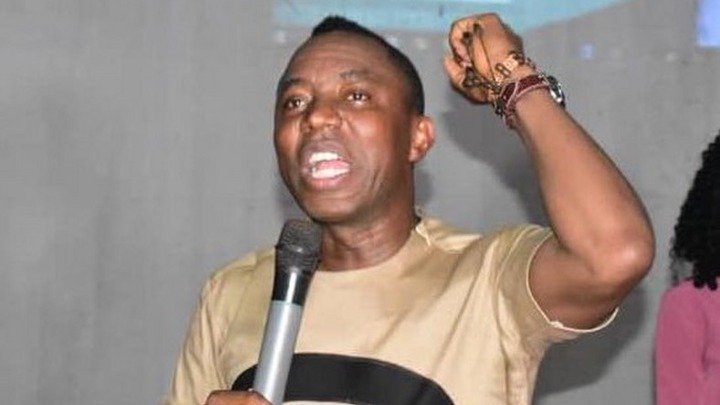 It is therefore incomprehensible on how the call for the release of Omoyele Sowore has reached such a crescendo and the crime he committed against the Nigerian state and people have been relegated to the background.

The Friends of Democracy and Freedom is convinced beyond a reasonable doubt that Omoyele Sowore is a creation by some foreign entities to cause the disintegration of Nigeria, else, how could one phantom how and why a Nigerian that is supposedly educated and enlightened would attempt to effect a violent change of government in a democratic setting.

The recent outing by Senator Bob Menendez with Opeyemi Sowore, the wife of Omoyele Sowore, calling for his release is, at best, an insult to the sensibilities of Nigerians because the focus has been deliberately shifted to freedom for Omoyele Sowore and not the crime he committed against the state.

The Friends of Democracy and Freedom wishes to ask the following questions: Did Omoyele Sowore commit an offence? Did he attempt to cause a change of a democratically elected government in Nigeria? Is the action of Omoyele Sowore and his co-travellers a threat to the territorial integrity of Nigeria?

Would there have been bloodshed if the Revolution had succeeded? If the answers to the above questions is yes, then there is every justification for the law to take its course in this case and the call by those who have blindly refused to come to terms with reality and understand that a crime was committed in the first instance should have a rethink and stop meddling in the affairs of Nigeria.

The Friends of Democracy and Freedom wishes to state that things that are intolerable in western climes are also unacceptable in Nigeria. A call for a revolution is a threat to peace and tranquillity, and all peace-loving people must condemn it.

The Friends of Democracy and Freedom is indeed concerned that with the way and manner some foreign interest has been advocating for the release of Omoyele Sowore while ignoring the bigger picture either by omission or commission is an indication that the ultimate plan was to cause Nigeria to go up in flames to suit their evil agenda.

Content created and supplied by: OluwafemiSossa (via Opera News )