10 most inhumane, ruthless leaders of all time...one used 70,000 human heads to build a castle

By Uc_globe (self media writer) | 2 years ago 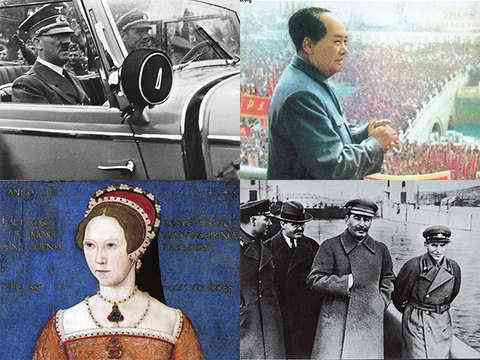 Wicked and cruel leaders has emerged down the times and ages, but the ruthlessness and evil of these leaders was worse in all in human history

Attila became the leader of the Hunnic Empire after he killed his brother. The empire is centred in present-day Hungary. He expanded the empire to present-day Germany, Russia, Ukraine and the Balkans. He famously proclaimed “There, where I have passed, the grass will never grow gain,”

Khan was a slave in his teenage years before he united the Mongol tribes and went on to conquer a major part of Central Asia and China. He was very brutal, and historians say he committed genocide and slaughtered civilians en masse.

Timur led military campaigns through a large part of western Asia, including modern Iran, to Syria. In present-day Afghanistan, he ordered the construction of a tower made out of living men, one stacked on top of another and cemented together. He also ordered a massacre to punish a rebellion and had 70,000 heads built up into minarets.

Queen Mary I (aka Bloody Mary)

King Henry VIII and Catherine of Aragon only child. She became queen of England in 1553 and soon restored Catholicism ( as the main religion and married Philip II of Spain — a Catholic. In few years, she burned hundreds of Protestants at the stake, and for that she was nicknamed ‘Bloody Mary’.

​In 1917, Lenin led the October Revolution to overturn the provisional government that had overthrown the czar. “During this period of revolution, war and famine, Lenin demonstrated a chilling disregard for the sufferings of his fellow countrymen and mercilessly crushed any opposition,” the BBC reported.

Stalin forced quick industrialisation and collectivisation in the 1930s that coincided with mass starvation, the imprisonment of millions of people in labour camps, and the ‘Great Purge’ of the intelligentsia, the government and the armed forces.

By the end of 1941, Hitler’s German Third Reich empire (and Axis) included almost every country in Europe plus a large part of North Africa. He devised a plan to create his ideal ‘master race’ by eliminating Jews, Slavs, gypsies, homosexuals and political opponents by forcefully sending them to concentration camps, where they were tortured to death. According to reports, the Nazis killed about 11 million people under Hitler’s regime.

Under the communist leader, industry and agriculture was put under state control in China. Any opposition was swiftly suppressed. Mao’s supporters point out that he modernised China. Others point out that his policies led to the deaths of 40 million people through starvation, forced labour and executions.

General Amin successfully carried out military coup and declared himself president. He then released hell through his rule for eight years, which led to the massacre of estimated 300,000 civilians. He also drove out Uganda’s Asian population (mostly Indian and Pakistani citizens), and spent large amounts on the military, both of which led to the country’s economic decline.

Us backed him him as he overthrew Chile’s government in 1973. Several reports says thousands of people ‘disappeared’ under the regime and over 35,000 were tortured. Pinochet died before he could stand trial on accusations of human-rights abuses