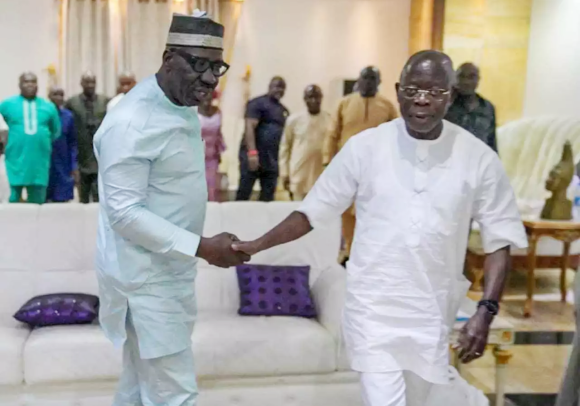 It feels like the Edo state chapter of the APC are already sensing victory against the PDP and their candidate, Godwin Obaseki. Adams Oshiomhole who returned to the state from Abuja on Saturday night, was on twitter, apparently making fun of his former political godson, Obaseki. Not only that, the former governor also addressed a large crowd at his country home, apparently making more fun of the current governor.

In a series of tweets on Oshiomhole‘s official twitter page, the former APC National Chairman perhaps seemed eager to celebrate Obaseki’s ‘imminent’ defeat. The former governor appeared to suggest that recent reports of vandalism of Ize-Iyamu’s campaign billboards were the handiwork of Governor Obaseki and his foot soldiers. This ‘action’, he attributed to the belief that Obaseki and the PDP are quite aware of an impending defeat.

"Destroying your opponent’s campaign posters is a sign of accepting defeat already, even before the election... The defeat of the PDP candidate, Obaseki in Edo state will be authenticated come September 19th. Edo must move forward."

The former ruling party in Edo state, the APC, appears to currently have the momentum. This is possibly explained by several instances that might paint the ruling PDP as being jittery, already. Just last week, there were reports that some officials of the Obaseki administration are being intimidated and coerced into decamping into the PDP. 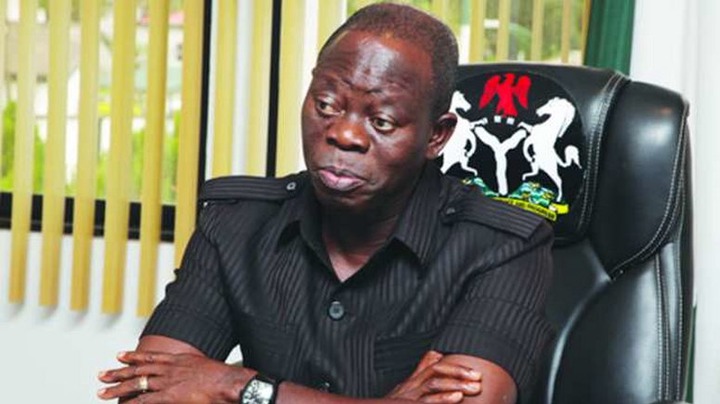 Even the idea that some officials within the Obaseki administration are still members of the APC is definitely not a good advertisement for Obaseki and the PDP. However, Obaseki might currently be in a serious dilemma. He would be accused of intolerance if he sacks such officials.

On the contrary, keeping them within his administration could give an impression of the governor being a leader without followers. To make matters worse, within the same week, reports emerged that posters and billboards of Obaseki‘s main challenger, Pastor Ize-Iyamu, at different strategic locations within the state are being vandalized.

The final straw, it may seem, is last weekend’s apparent master stroke by the APC to institute legal proceedings that could likely get Obaseki and the PDP disqualified, even before the contest had begun. The PDP might have spent the last few weeks strategizing on how to make Obaseki avoid getting disqualified as a result of the impending case of forgery and perjury against him. At least, Oshiomhole had warned Obaseki last month, to be ready to defend his credentials in court.

Confusion within the PDP might likely be escalated due to a previous controversy about whether Obaseki’s running mate should come from among old members of the PDP, or not. Eventually, Obaseki was able to prevail upon the party to allow Philip Shuaibu to continue in his role as deputy. However, with the new twist to the forgery and perjury case, now that the gubernatorial candidate and his running mate both have their respective cases to answer, those PDP members who opposed Philip Shuaibu as Obaseki’s running mate could likely be enraged. They would likely be emboldened to tell the others... ‘we told you so’. This could affect solidarity within Obaseki’s campaign structure, likely jeopardizing every hard work.

Adams Oshiomhole as a veteran political strategist, probably knows how this new twist is likely to destabilize the Obaseki camp. That could be why he gave what appears to be an anticipatory victory speech at his home town of Iyamho, near Auchi in Edo state. While addressing a large crowd that had come to welcome him back into the state from Abuja, the former chairman had remarked, in apparent reference to Godwin Obaseki:

Maybe Oshiomhole‘s statements isn't just mere boasting. After all, even if the PDP eventually wins in September, another hurdle awaits them at the law courts. Could we likely experience something similar to what happened in Bayelsa state earlier this year?

Whichever way you analyze the situation, the prospects are not particularly enticing for Governor Godwin Obaseki, his deputy, Philip Shuaibu, and the Edo PDP in entirety. Let's keep our fingers crossed, as more drama will likely unfold, imminently.