Pres. Buhari reveals to World Leaders a major setback in the fight against insurgency in Nigeria.

President Muhammadu Buhari is currently in the United States of America attending the 76th session of the United Nations General Assembly (UNGA). The President has participated in significant meetings such as; the high-level meeting to commemorate the twentieth anniversary of the adoption of the Durban Declaration and Programme of Action which was held two days ago. Also, President Buhari has held bilateral meetings with some other leaders of delegations and heads of International Development organizations. 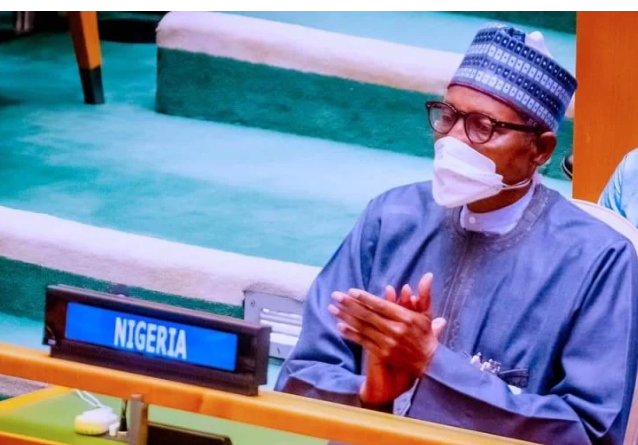 However, while speaking to world leaders at the ongoing United Nations General Assembly, President Muhammadu Buhari has revealed a major setback in the fight against insurgency in the country. The president confidently affirmed that Nigeria will win the war against Boko Haram terrorists and all their unlawful and nefarious activities especially in the North-East part of Nigeria.

Recall that for some years now, one major security challenge facing the country has been the activities of Boko Haram terrorists who have terrorized most states in the north-eastern region of Nigeria. Hence, the President Muhammadu Buhari-led administration has through the acquisition of sophisticated weapons clamped down on the activities of these insurgents. This has resulted in the recent piece of goodnews that some of the Boko Haram terrorists have surrendered and are seeking forgiveness.

Nevertheless, a recent publication by Punch Newspaper has revealed that President Muhammadu Buhari made it clear to the world leaders at the ongoing UNGA that Nigeria as a country was concerned about illicit trading and movement of small arms which was increasing criminality and insurgency in the country.

It is good to note that this illegal trading of small arms has continued to compromise the gallant approach of men of the Nigerian army who should have successfully crushed the insurgents by now. These weapons are being used by the Boko Haram terrorists to repel the gallant attack of men of the Nigerian army. As such, if the sale of these small weapons is blocked, then the victory against insurgency will be facilitated and hence peace and serenity will return to the regions that have been devastated by the activities of Boko Haram insurgents.