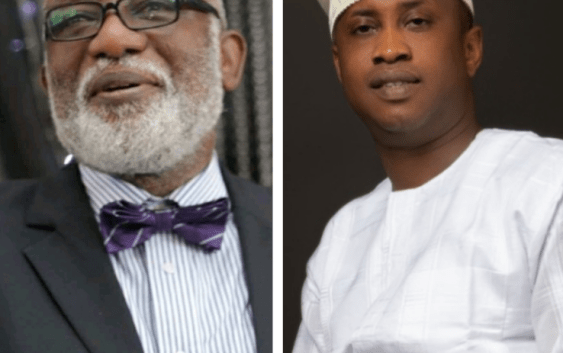 A political group in Ondo state, Unity Mandate Agenda (UMA) has berated the Deputy Majority Leader of the Senate, Senator Ajayi Boroffice for requesting the position of deputy governor as part of conditions that must be fulfilled by the party before he can back the second ambition of Governor Oluwarotimi Akeredolu, SAN.

These demands that was reportedly tabled before members of the APC reconciliation committee led by Governor of Niger State, Alhaji Abubakar Sanni Bello, include a Deputy governorship slot (allegedly for his anointed governorship Aspirant, Jimi Odimayo), automatic tickets for him and other members of Unity Forum holding elective positions during the 2023 general elections, key positions in Akeredolu’s cabinet and among others.

UMA, a political forum that was once rooting for Chief Olusola Oke’s candidature said its decided to pitch its tent with Akeredolu’s camp after the reality was dawned on them that the political scheming of Boroffice, who is the leader of aggrieved APC members in the state under the platform of Unity Forum was the main reason why the group failed to produce a consensus candidate.

In a statement signed by its coordinator, Comrade Babatope Abisola, stressed that UMA has been vindicated, saying it would be recalled that they raised the alarm early June this year that Boroffice deliberately created a crisis in the Unity Forum in order to give him easy access to Akeredolu.

Abisola, who charged the National leaders of the party to be wary of the antics of Boroffice, he is making an attempt to rule the State by proxy.

“The six demands of the third term senator is an open secret that Boroffice is making an attempt to rule the state by proxy. When you have the Deputy governor, automatic, key cabinet positions and also control the party structures, tactically you are the governor.

“Let this be on record that since 2016, senator Boroffice is the brain behind the lingering crisis in the party. He is so desperate that he may approach the oppositions if the party fails to yield to his request.

“We aware that during the 2016 governorship election, Boroffice also tabled similar demands but later work for Chief Oke, who was then the Alliance for Democracy gubernatorial candidate, after Governor Akeredolu refused to strike a deal with him.

“Aspirants in Unity Forum has become Boroffice’s playing cards. Within a year, the senator had endorsed four aspirants out of 10 in that forum.

“Ife Oyedele was the first aspirant to feel the deceptive nature of our Senator. He told us that Oyedele was the anointed candidate from the Villa and he later told us that the Ikale man is too proud and he does not have the financial capacity to challenge an incumbent governor.

“Olusola Oke was the next victim. He told us that the Ilaje man enjoys street credibility that can challenge Akeredolu. He was also the first person to disparage Oke. He said he is a mole, who is working for Akeredolu’s second term.

“He later brought an obscure politician, Mr.Dapo Adenegan as his choice, saying only an Owo man can unseat Akeredolu. Unfortunately, Adenegan did not collect form.

“The current victim is a young businessman from Irele, Mr. Jimi Odimayo. We have been reliably informed that he is currently working for Odimayo to become Akeredolu’s running mate.

“It is high time leadership of the party including President Muhammadu Buhari call Senator Boroffice to order. He should stop rating his selfish interest above party interest. We are keenly monitoring his political activities in the state and we will continue to expose every move of the Senator to bring the party into disrepute”, the statement reads.

However, when contacted, Chief Olusola Oke (SAN), disowned the group, saying it was not part of the numerous political groups working for his election.

Oke who spoke through Mr Rotimi Ogunleye, his Media Aide, noted that he doesn’t need to use group to express his mind.

Also, the Media Aide to the Senator, Kayode Fakuyi said he was not aware of the conditions purportedly given by his boss before he could support Governor Akeredolu.

It was learnt that the APC progressive governors were the one mounting pressure on Senator Boroffice to support Akeredolu.

Details check the link below