The First Lady of the United States, Melania Trump, unveiled the first look of the Christmas decorations undertaken at the White House this year. Based on the theme 'America the beautiful,' Melania said it was a tribute to the 'land we are proud to call home.'

Over the years, Melania's decoration at the White House has received a mixed bag of reactions from the social media users, who haven't shied from targeting the First Lady often. 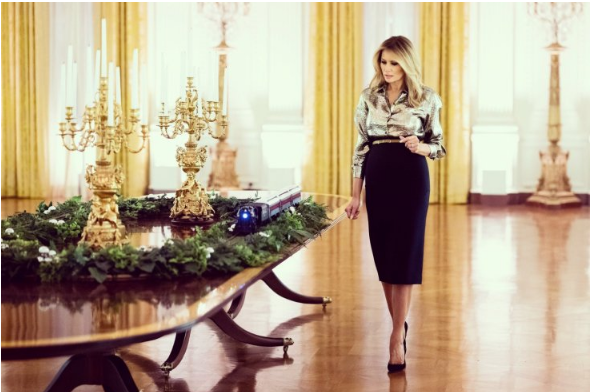 Melania Gives a Glimpse of the Decorations in a Video Tour

Donning a metallic gold top paired with high waist pencil skirt and stilettos, Melania strutted through the halls of the White House, decked with the Christmas decorations.

Posted the video and images of the décor on her official Twitter account, Melania wrote, "During this special time of the year, I am delighted to share "America the Beautiful" and pay tribute to the majesty of our great Nation. Together, we celebrate this land we are all proud to call home. #WHChristmas."

During this special time of the year, I am delighted to share â€œAmerica the Beautifulâ€ and pay tribute to the majesty of our great Nation. Together, we celebrate this land we are all proud to call home.  #WHChristmas  pic.twitter.com/fdZmB3rdXL

Earlier she had thanked the volunteers who have helped in decorating the White House. "This weekend, volunteers from all across America have come to decorate the @WhiteHouse for the holiday season. Thank you for your time, enthusiasm & devotion to make sure the spirit of peace & joy fill the historic rooms & halls of the People's House! #WHChristmas," she had tweeted.

The images showed Christmas trees lining up the hall. A toy train bearing the message, America the beautiful, ran on the tracks placed on a table. The decorations on the tree also featured the Airforce One.

Despite the Christmas decoration in full swing at the White House, the netizens still seemed unhappy over Melania's remark about the decorations in a leaked tape.

Last month in a leaked recording while talking to former friend Stephanie Winston Wolkoff, Melania complained about her duty to decorate the White House during Christmas. "They say I'm complicit. I'm the same like [President Trump], I support him, I don't say enough. I don't do enough. Where I am. I put - I'm working like a - my a** off - at Christmas stuff that you know, who gives a f*** about Christmas stuff and decoration? But I need to do it, right? Ok, and then I do it. And I say that I'm working on Christmas planning for the Christmas.

And they said, "Oh, what about the children that they were separated? Give me a f***ing break. Where they were saying anything when Obama did that?' she was heard in the leaked conversations.

"Congratulations again, First Lady Melania, for another wonderful Christmas decoration of the People's House. Look forward to finding the "Easter Eggs" in this year's decorations!" wrote a user.

"Christmas hater!!!! And you didn't even have to do a thing. The staff did everything. Useless," wrote another user.

The only part she plays in this is meandering around for 10 minutes for a photo op, acting like she cares. She doesnâ€™t. In fact, she f*cking hates Christmas.

"Cannot wait until the @WhiteHouse is decorated by the classy @DrBiden abd doesn't look like a freak of gold shot and ice-cold bizarro land. Oh, and she won't call it fucking Christmas to do this because she's not a spoiled, lazy, grifting, bought @FLOTUS," tweeted a user.