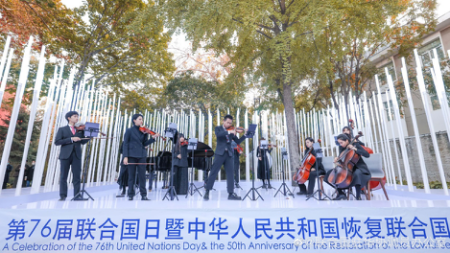 The United Nations in China (UN China) holds activities at the garden of the building of the UN in Beijing to celebrate the 76th UN Day (Oct. 24) and the 50th anniversary of the restoration of the lawful seat of the People’s Republic of China in the UN, Oct. 22, 2021. (Photo/Weibo account of the office of the UN Resident Coordinator in China)

Under the leadership of the Communist Party of China (CPC), the Chinese people have made a chain of remarkable achievements and the country has realized leapfrog development, said Alberto Anaya Gutierrez, president of the Labor Party of Mexico, in a recent interview with People’s Daily.

Since the 1990s, Anaya has visited China for over 10 times. According to the political leader, he has been to many Chinese cities, including Beijing, Shanghai, Guangzhou and Wuhan, where he saw row upon row of skyscrapers, criss-cross roads as well as diversified application scenarios of digital technologies. China’s tremendous development achievements prove that its reform and opening-up is indeed a scientific policy, he noted.

During his trips to China, Anaya paid visits to car factory, wind power equipment plant, and toy factory, among other facilities. He was really impressed by the widely used automatic production equipment at factories and considered it a mirror of China’s strong manufacturing capacity and innovation vitality.

China has become a front runner in the world in cutting-edge technologies, especially such fields as 5G communication, robotics, biology, satellite communication, high-speed rail, network and computer information technology, and has opened up new prospects for development, Anaya said.

He believes that technologies have made life easier for the Chinese people. “I once took a maglev train, which ran as fast as over 400 kilometers per hour, to the Shanghai Pudong International Airport. It was such a wonderful experience,” he recalled, adding that the maglev train was fast and steady just like China’s development.

The reason why the CPC, a century-old major party, has continuously achieved successes and maintained vitality is that it has always prioritized the interests of the people, empathized and worked with them, and strived for their well-being and better life, Anaya pointed out.

He has read carefully Chinese President Xi Jinping’s book “Xi Jinping: The Governance of China” and found the Chinese leader’s ideas, including upholding and strengthening the CPC’s overall leadership, advancing high-quality economic development, promoting harmonious coexistence between man and Nature and jointly building a community with a shared future for mankind, really impressive.

The “Chinese miracle” derives from the leadership of the CPC, said Anaya, adding that China has achieved its poverty alleviation goals on schedule and built a moderately prosperous society in all respects, which provides precious experience in addressing the problem of poverty for other countries and political parties in the world.

Anaya believes that Xi’s ideas on governance are exerting a profound influence in the world.

The Belt and Road Initiative (BRI) proposed by Xi, which involves not only economic cooperation but many other aspects for the purpose of achieving common development and prosperity, has facilitated trade and exchanges among countries, advanced infrastructure construction and manufacturing in countries participating in the initiative, and benefited the employment and well-being of peoples around the world, said Anaya, who noted that Latin American and Caribbean countries have actively participated in the BRI construction and reaped tangible fruits.

Noting that China has successfully curbed the COVID-19 pandemic and actively assisted other countries in fighting against the virus, Anaya said China shared its anti-pandemic experience with Mexico and airlifted medical supplies to the latter. Such actions demonstrated China’s sense of responsibility as a major country, he said.

The Labor Party of Mexico and the CPC have maintained friendly relations and reached a consensus on respecting each other and strengthening dialogues and cooperation, said Anaya, adding that the Mexican political party is willing to deepen inter-party communication with the CPC to continuously drive forward the China-Mexico comprehensive strategic partnership.

The Labor Party should learn from the CPC’s spirit of overcoming difficulties and working hard as well as its determination and efforts to combat corruption and build a clean government, and Mexico should learn from China’s precious experience in formulating long-term plans for driving national development, according to him.

As an influential major party in the world, the CPC has always been committed to strengthening dialogues and cooperation with political parties in other countries and promoting the construction of a community with a shared future for mankind, Anaya pointed out.

It is believed that China, under the leadership of the CPC, will continue to play an important role in safeguarding world peace and advancing the development of humanity, he said.