We Are Not Responsible For Destroying Ize Iyamu's Billboard, PDP Tells APC

By 9jaInfoGist (self media writer) | 2 years ago

The Edo State section of the Peoples Democratic Party, (PDP), hosts said neither the party nor the state government was liable for the harm or expulsion of the All Progressive Congress (APC) competitor's boards.

The All Progressive Congress, (APC), had in an announcement given by the Director of Publicity of Ize-Iyamu Campaign Organization, Mr John Mayaki, on Saturday, raised the alert that the crusade boards of Mr Osagie Ize-Iyamu were being wrecked and pulled down in some piece of the state.

Mayaki had additionally claimed that the People's Democratic Party, (PDP) and the state government were answerable for the demonstration.

In any case, Nehikhare depicted the charge against the People's Democratic Party, (PDP) and the state government as "negligible and unconfirmed."

The People's Democratic Party, (PDP), publicity secretary included that taking into account this turn of events, the state government had notified the security organizations to guarantee that the culprits of the demonstration were caught, while additionally promoting the All Progressive Congress, (APC) to search internally.

He stated: "there are groups inside the All Progressive Congress, (APC) In the state. Maybe the groups could be dependable.

"Let me make it certain that the People's Democratic Party, (PDP) and the state government has no hands in the obliteration or harm of the announcements mounted by the All Progressive Congress, (APC).

"While we censure the demonstration, we, be that as it may, encourage the All Progressive Congress, (APC), to look inwards, as it is regular information that the party is truly partitioned and populated by groups". He included. 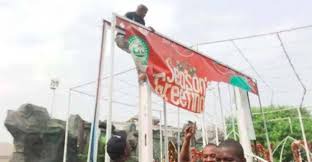 Follow this page for more updates as they unfold.

"Pictures used in this article are for illustrative purposes".

Content created and supplied by: 9jaInfoGist (via Opera News )