How The Defection of Mimiko, Dele Momodu May Threaten The Chances of APC In 2023

Definitely, the recent defection of some notable politicians to the opposition Peoples Democratic Party (PDP) may, surely, have effect on the proximity of All Progressives Congress (APC) to hold on to power beyond 2023. 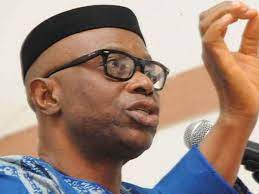 Notably, the defection of former governor of Ondo State, Olusegun Mimiko, from Zenith Labour Party (ZLP); and the media guru, Dele Momodu, who defected from National Conscience Party (NCP) to the opposition Peoples Democratic Party (PDP) may, possibly, threaten the chances of APC to retain incumbency in 2023.

First, it may be very difficult for anyone to attempt to underestimate the political popularity of former governor of Ondo State, Olusegun Mimiko, in the politics of Ondo.

Considerably, only a joke may not see Ondo State chapter of the opposition Peoples Democratic Party (PDP) becoming stronger with the defection of former governor Olusegun Mimiko to the opposition party.

Consequently, the opposition Peoples Democratic Party (PDP) may be considered to have a higher stance of winning the 2023 presidential polls in Ondo State.

No doubt, this may, interesting, threaten the chances of the ruling All Progressives Congress (APC) to win the 2023 elections, conveniently.

Secondly, if media and information still remain relevant in the course of political campaigns and electioneering strategies, the defection of Dele Momodu to the opposition Peoples Democratic Party (PDP) could, possibly, be considered as a big threat to the ruling party, All Progressives Congress (APC) in 2023.

Holistically, if one should consider the political experience of Dele Momodu since the days of late Moshood Kashimawo Olawale Abiola and his experience in the media, one may conclude that the opposition Peoples Democratic Party (PDP) has been armed with political media strategist whose membership of the party may, highly, threaten the political stance of the ruling party, All Progressives Congress (APC) in 2023.