Opinion: 11 Lawmakers In Anambra Decamping To APC Might Be South East Way Of Protesting Against PDP’s Zoning

According to Daily Post, Eleven Anambra State lawmakers from the Peoples Democratic Party, (PDP) and the All Progressives Grand Alliance, (APGA), shifted their loyalty to the ruling All Progressives Congress, (APC). They decamped based on several political issues with their former parties. They said they appreciated the leadership of the Chairman, APC Caretaker Extraordinary Convention Planning Committee, Mai Mala Buni. 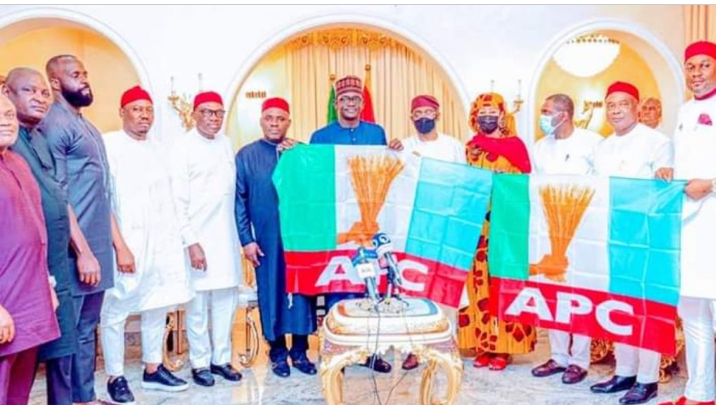 However, this defection might have something to do with the zoning of the Peoples Democratic Party (PDP) presidential ticket to the North, despite having many supporters and dominance in the South. According to analysis, the PDP has Eight (8) Southern governors and Six (6) Northern governors, a composition that is supposed to put the South at the edge of getting the presidential ticket in 2023. This position taken by the PDP has angered many politicians in the South, most especially the ones from the southeast geopolitical zone of Nigeria, which out of the three most dominant languages in Nigeria, it is only the Igbo that has not tested the presidential post.

For instance, if you take statistics, the southeast geopolitical zone or the Igbo if you like, has never produced either the Civilian President or Vice President of this country from 1999 to date. Now within the PDP, they are trying to throw the slot of the Senate President on the Zone. There is the likelihood that APC will zone its presidential ticket to the South which will go to the South East, since South South and South West has been their before.

Meanwhile, those people miscalculating and saying that there are numerous problems in the southeast geopolitical zone of Nigeria, therefore, zoning is not what should preoccupy the zone, missed the road to eliminating the problems that are spoken about. Everything starts with your leader. So, choosing one is as important as solving our problems. And zoning has been made a criterion for that. Many Igbo are against the continuation of this zoning between the Yorubas and Hausa/Fulanis. Therefore, the politicians are already reacting to the marginalization.